The tool is developed by IBM Watson. 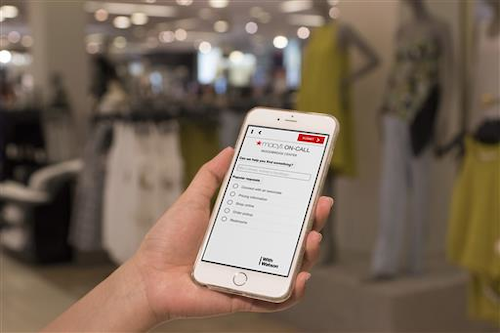 NEW YORK (AP) — Macy's is testing a mobile tool using artificial intelligence that lets shoppers get answers customized to the store they're in — like where a particular brand is located or what's in stock — that they would normally ask a sales associate face-to-face.

The tool, which the nation's largest department store chain calls a "mobile companion," can be accessed for now through a browser and will accept questions in 10 U.S. locations about products, services and facilities. It uses natural language and offers feedback in seconds.

It's developed by IBM Watson — the Jeopardy-winning "cognitive computing" service and is designed to keep learning more about the store's customers. That's a key element as Macy's seeks to spur sluggish sales, make being at the store more enjoyable and distinguish itself from online portals and specialty retailers.

"We want to improve the shopping experience. We want the customers to shop at Macy's and come back," Serena Potter, Macy's group vice president of digital media strategy told The Associated Press. The goal: Boost sales while freeing up employees to focus on more complicated customer requests.

Potter said Macy's worked with sales associates to compile the most common inquires per store. Macy's then fed the system questions and information so it can recognize what's being asked and what the answer is. Since the pilot was quietly launched last month, the number of queries ballooned to the low thousands per store.

Five Macy's locations — in Bethesda, Maryland; Woodbridge, New Jersey; Portland, Oregon; Arcadia, California; and Miami, Florida — are focusing on the self-serve initiative. Five others — Short Hills, New Jersey; Buford, Georgia; Atlanta, Georgia; North Miami, Florida; and Garden City, New York — will have a feature that lets customers summon a sales associate. The two Miami locations will have it available in Spanish as well. Customers can click on macys.com/storehelp on their mobile device, but Potter said the company is working on an app. She declined to say when the tool might be rolled out nationwide.

The mobile tool has significant potential to help Macy's develop deeper relationships with customers by eventually offering shoppers help in styling outfits and other services. IBM Watson's vice president Stephen Gold says the technology, once trained, can pick up if customers are frustrated based on their answers and can alert a sales associate. The technology is similar to artificial intelligence the company is working on with brands such as 1-800 Flowers and North Face, but in those cases, it answers questions on their websites.

Macy's is accelerating its efforts to reinvent its business as online leader Amazon.com is expected to surpass the department store in clothing sales next year. The company's sales dropped 4 percent to $27.08 billion for the year ended Jan. 30, and it has slashed its full-year profit and revenue outlook for the year.

Reversing that will be the major challenge for incoming CEO Jeff Gennette, who succeeds longtime chief Terry Lundgren early next year.