Iraq is eager to improve its creaky aviation industry, which lags far behind that of its energy-rich neighbors. Boeing's delivery of the twin-aisle 777-200LR plane comes less than two weeks after the company's chief rival Airbus announced the delivery of one of its own wide-body planes to Iraq. 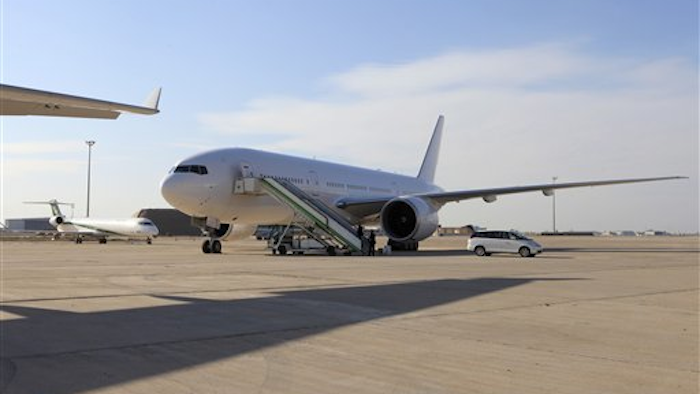 BAGHDAD (AP) -- The first new Boeing Co. jetliner sold to Iraq in 30 years touched down in Baghdad on Saturday, signaling the country's determination to rebuild its economy after decades of war and sanctions.

Iraq is eager to improve its creaky aviation industry, which lags far behind that of its energy-rich neighbors. Boeing's delivery of the twin-aisle 777-200LR plane comes less than two weeks after the company's chief rival Airbus announced the delivery of one of its own wide-body planes to Iraq.

"The arrival of this plane represents a big chance for Iraqi Airways to turn around," Iraqi Transportation Minister Hadi al-Amiri said.

More planes are coming. Iraq has ordered another 30 of Boeing's smaller 737-800 model and 10 of its new 787. The first of the 737s will be delivered in the middle of next year, according to the Chicago-based plane maker.

Airbus in early December said it had delivered its first A330-200 to Iraq. Iraqi Airways, which plans to use that plane on European and other international routes, already operates two Airbus A321s.

Boeing last sold Iraq a commercial plane — a version of the 747 jumbo jet — in 1982, said Donald Galvanin, the company's sales director for the Middle East. He said this weekend's delivery is an important step toward improving Iraq's economy.

"To bring in business, you need a connection with outside ... and a viable airline," he said.

Iraq was able to get the 777 delivered now because another customer was unable to take it, Galvanin said. He said he expects Baghdad may be interested in buying more of the long-range jets down the road because "they realize they would need a few more."

The U.S. Embassy said it worked closely with Boeing and Baghdad to complete the 777 sale. Financial terms were not disclosed.

Iraqi Airways' efforts to turn itself around have been hobbled by ageing equipment, a lack of adequately trained staff and a long-running dispute with Kuwait stemming from Saddam Hussein's invasion in 1990.

The disagreement centered on Kuwait's accusations that Saddam's regime stole 10 airplanes and millions of dollars' worth of equipment and spare parts during the invasion. Kuwait earlier wanted to $1.2 billion in reparations, which Iraq's postwar leaders had resisted paying.

Iraq and Kuwait earlier this year reached a $500 million deal to settle the airline feud, paving the way for Iraqi Airways to resume normal operations. The dispute had scuttled at least one planned Iraqi Airways route, between Baghdad and London, after Kuwait attempted to confiscate the Iraqi plane in the British capital.

As Iraqi Airways has struggled, foreign airlines have increasingly begun flying to the country, eating into the national carrier's share of the market.

They include airlines from neighboring countries, including Turkish Airlines and Royal Jordanian, and well-funded Gulf airlines such as Emirates and Etihad Airways. Austrian Airlines last year became the first major western carrier to resume regular flights to Baghdad since the 2003 U.S.-led invasion.

Foreign airlines are increasingly offering flights to other Iraqi cities as well, particularly Irbil in the self-ruled Kurdish region. The Kurds' northern enclave is much safer than the capital and is a popular destination for foreign investors looking to break into the Iraqi market.

No U.S. commercial airlines fly regularly to Iraq. The U.S. Federal Aviation Administration last week lifted a 16-year-old a ban on American carriers flying to Irbil and Sulaimaniyah, also in the Kurdish area. The agency said flights to other Iraqi airports may be allowed in the future.