A former worker told state media Wednesday he set the fire that killed 14 young workers at a Chinese undergarment factory because he was angry about less than $500 in unpaid wages. The suspect, Liu Shuangyun, said he started the fire "because I couldn't get my salary," which he had been owed since quitting the factory three years ago.

BEIJING (AP) -- A former worker told state media Wednesday he set the fire that killed 14 young workers at a Chinese undergarment factory because he was angry about less than $500 in unpaid wages.

The suspect, Liu Shuangyun, told the Guangdong TV broadcaster in a jailhouse interview that he started the fire "because I couldn't get my salary," which he had been owed since quitting the factory three years ago.

Asked whether he had thought about or regretted the loss of life the fire had caused, Liu said, "I didn't think about these things."

Fourteen people were killed and one was seriously injured in the fire Tuesday afternoon in Shantou city in Guangdong province, the provincial emergency department said on its microblog.

The 14 victims were all women aged 18 to 20, the Southern Metropolis Daily said in an online report. The official Xinhua News Agency said the victims were 13 women and one man. It said Liu, a 26-year-old migrant worker from Hunan province, had been arrested, but it didn't specify what charges he faced.

The case has underscored the hand-to-mouth existence of many young Chinese migrant workers and raised questions about basic fire safety awareness at the countless small factories that churn out clothes, toys and other goods and have helped power China's dizzying economic growth for decades.

Xinhua said the suspect spent 40 yuan (US$6) on petroleum used to start the blaze and fled the scene after his alleged crime.

"The whole time, I've been very impulsive, very angry about this," Liu said during the television interview. "So I did these things."

Sitting on a chair, his hands in handcuffs, Liu said the factory boss owed him 3,000 yuan (US$461). The reporter said that after Liu quit the factory, his former boss had only given him excuses for why he couldn't pay the back wages.

A photo accompanying the Guangdong TV report showed a four-story building, lined with windows on each floor, its front completely blackened. The fire had not spread to an adjacent building.

Geoffrey Crothall, a spokesman for China Labour Bulletin, a Hong Kong-based worker's rights group, said that judging by the photo, the factory looked like "a fairly typical manufacturing workshop" in southern Guangdong.

"In many of these places health and safety is not a priority," he said. "Many of these factories are very unpleasant places to work in."

Senior provincial officials set up a team to investigate and step up safety measures to avoid similar fatal fires, Guangdong's emergency department said. The factory made underwear, it said.

Crothall said unpaid salaries are a major source of worker discontent in China.

"A lot of this is related to the current economic climate, a lack of credit in the system, a lack of capital in circulation," Crothall said. "If companies are not getting paid for their products, then they're not going to pay their workers."

Building fires are common in China because of lax safety codes and unsafe construction work.

A fire in April 2011 at an unlicensed garment factory in Beijing killed 17 people. The fire happened in the middle of the night and anti-intrusion bars over the factory's dormitory windows were blamed for trapping victims inside.

Last month, a fire at a clothing factory in Bangladesh killed 112 people and highlighted dangerous workplace conditions. Survivors and authorities there said exit doors were locked and the building lacked emergency exits. 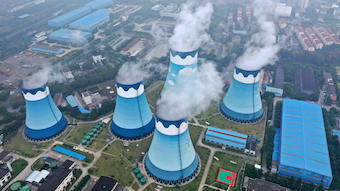