The owner of a Bangladesh clothing factory where a fire killed 112 people says he was never informed the facility was required to have an emergency exit, a sign of how far removed the leaders of the nation's garment industry are from issues of worker safety. 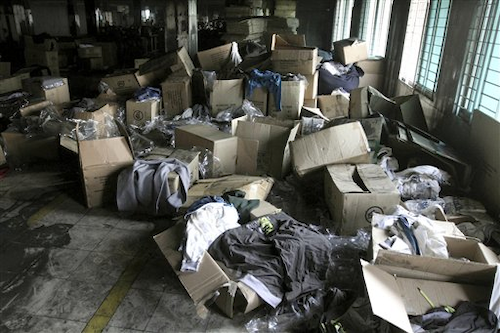 DHAKA, Bangladesh (AP) -- The owner of a Bangladesh clothing factory where a fire killed 112 people says he was never informed the facility was required to have an emergency exit, a sign of how far removed the leaders of the nation's garment industry are from issues of worker safety.

"It was my fault. But nobody told me that there was no emergency exit, which could be made accessible from outside," factory owner Delwar Hossain was quoted Thursday as telling The Daily Star newspaper. "Nobody even advised me to install one like that, apart from the existing ones."

"I could have done it. But nobody ever suggested that I do it," said Hossain, who could not be reached for comment by The Associated Press on Thursday.

Activists in the South Asian country hope the tragedy will invigorate their lengthy — but so far fruitless — efforts to upgrade safety standards and force stronger government oversight of the powerful industry.

The Tazreen Fashions Ltd. factory in a Dhaka suburb was making clothes for Wal-Mart, Sears, Disney and other major global retailers. When a fire broke out over the weekend, many of the 1,400 workers were trapped inside the eight-story building because exit doors were locked. A fire official said the death toll would have been much lower if the factory had had an emergency exit.

Police said they were interrogating three factory managers on possible negligence charges. Workers said as they tried to escape the fire they found exit doors were locked.

Hossain, a former accounts manager at another garment factory, set up his own clothing business, Tuba Textiles Mills Ltd. in 2004. The Tazreen factory was one of a dozen owned by his company.

Workers interviewed by the AP have expressed support for Hossain, and describe him as a bearded man in his 50s who usually wears white clothes. Worker Mohammad Rajib said he is a "gentle man" who gave them raises and fired some managers after workers protested against low pay and abuse.

"He did not sack any worker. He told us: 'You are my people, if you survive, I will survive,'" Rajib said.

The factory employed about 1,400 workers, most from a poor region of northern Bangladesh and about 70 percent of them women.

Labor Minister Rajiuddin Ahmed Raju said that factories without emergency exits — or with only one such exit — will be forced to close until they upgrade their safety infrastructure. It was not clear when and how that directive will be enforced.

Nazma Akhter, president of the Bangladesh Combined Garment Workers Federation trade union, called for the arrest of the factory's owners and management to send a message to the industry as a whole.

"There should be a criminal case against them. It could stop the recurrence of such incidents," she said.

In 2001, Bangladesh's High Court directed the government to set up a committee to oversee the safety of garment workers after a similar fire in a factory killed 24 people. But that directive was never implemented, and more than 300 people have been killed in garment factory fires since 2006.

"It's unfortunate that the government has ignored the directive. Had the government complied with it there would have been fewer accidents, I believe," said Sultana Kamal, executive director of Ain O Salish Kendra, a legal and human rights group that had petitioned the court for the ruling.

Government officials did not respond to calls for comment.

Wal-Mart said it received a safety audit that showed the factory was "high-risk" and had decided well before the blaze to stop doing business with Tazreen. But it said a supplier had continued to use Tazreen without authorization. The retailer said it stopped doing business with the supplier Monday.

Sears said it learned after the blaze that its merchandise was being produced there without its approval through a vendor that has since been fired. Walt Disney Co., which licenses its characters to clothing makers, said its records indicate that none of its licensees have been permitted to make Disney-brand products at the factory for at least a year.

The Bangladesh Garment Manufacturers and Exporters Association fears the repercussions if Western companies pull out of the country's $20 billion a year garment business. Wal-Mart alone buys about $1 billion of garments here.

"It's the time of solidarity, not to go away. Wal-Mart should come forward to resolve existing issues through discussion and an attitude of partnership," said Shafiul Islam Mohiuddin, president of the trade group. "Otherwise, what will happen? Manufacturers would lose orders, workers will lose their jobs. This could create another complicated situation. For whose interest? None will benefit from it."