The first American death involving a car in self-driving mode presents a dilemma: How aggressively to embrace the potentially life-saving technology after a fatal crash. The driver's history of speeding further complicates the question. 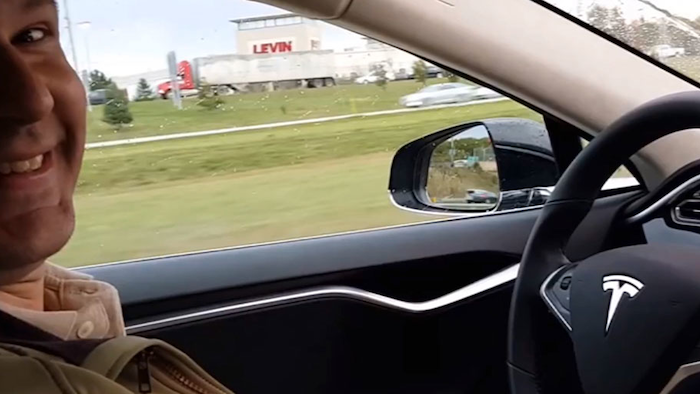 WASHINGTON (AP) — The first American death involving a car in self-driving mode presents a dilemma: How aggressively to embrace the potentially life-saving technology after a fatal crash. The driver's history of speeding further complicates the question.

The National Highway Traffic Safety Administration is investigating the design and performance of the Tesla Model S vehicle's "Autopilot" system after announcing the death of a driver on Thursday. The system was engaged at the time of the crash, but that is only part of the story.

The driver, Joshua D. Brown, a 40-year-old technology company owner from Canton, Ohio, was so enamored of his sedan that he nicknamed it "Tessy" and praised the Autopilot's safety benefits. Brown published videos on Youtube of himself behind the wheel with the system active.

He was killed May 7 in Williston, Florida, when his car's cameras failed to distinguish the white side of a turning tractor-trailer from a brightly lit sky and didn't automatically activate the brakes, according to statements by the government and the automaker. Brown didn't take control and brake, either.

Brown's family said in a statement that it wanted to help the government and Tesla so that "information learned from this tragedy will trigger further innovation which enhances the safety of everyone on the roadways."

His death comes at an awkward time for the U.S. government and car makers.

NHTSA Administrator Mark Rosekind was expected later this month to announce guidelines on self-driving cars for states and automakers. The transition to the new technology could radically transform how people travel in the future.

Rosekind has stressed the potential life-saving advantages. In theory, automated vehicles will eliminate the human errors that are responsible for an estimated 94 percent of traffic fatalities. With more than 35,000 people killed on the nation's roads last year, the benefits could be enormous. Still, experts say some crashes and deaths will continue occurring.

Expecting "defect-free," self-driving cars is unreasonable, said Timothy Carone, a Notre Dame professor and author of "Future Automation: Changes to Lives and to Businesses." Still, he said the technology will become safer as it matures.

"There is nothing unique about software that it can't be tested," Claybook said.

Friends described Brown as having a "need for speed," and state records obtained by The Associated Press show he had eight speeding tickets over six years.

Terri Lyn Reed, an insurance agent in northeastern Ohio who insured Brown's business, described her friend as "kind of a daredevil" who loved excitement and speed, and was fearless. A former employee of Brown's, Stan Staneski, said Brown drove fast, but he considered him a safe driver.

But the truck driver in the wreck, Frank Baressi, 62, of Palm Harbor, Florida, recalled Brown driving quickly when the accident occurred: "He went so fast through my trailer I didn't see him."

Baressi also told the AP that Brown was "playing Harry Potter on the TV screen" at the time of the crash. Baressi acknowledged he couldn't see the movie, only heard it.

The Florida Highway Patrol confirmed Friday that it found a portable DVD player in Brown's car after the accident, but agency spokeswoman Sgt. Kim Montes said investigators could not confirm whether it was playing when the vehicles made contact.

Baressi is the owner of Okemah Express, a trucking company with one truck and one driver, himself. Federal records don't identify drivers by name, but they show Okemah and its driver were cited for seven violations during four traffic stops over the past two years. The most serious violation was in January when a Virginia state inspector ordered the driver off the road for being on duty more than the legal limit of 14 hours in one day. The driver was also cited for ignoring a traffic-control device in March and an improper lane change in December. An inspection last year found the truck's tires were going bald.

An attorney representing Brown's family said no decision had been made about whether to sue anyone.

"Once the complete investigation results are published, we'll obviously evaluate all the data and the conclusions and make our decision from there," Paul Grieco said Friday.

In addition to its cameras, the Model S has radar sensors that could have spotted the trailer. But Tesla Motors CEO Elon Musk wrote on Twitter that the radar "tunes out what looks like an overhead road sign to avoid false braking events."