How GPS Could Help Tigers & Traffic Coexist in Asia 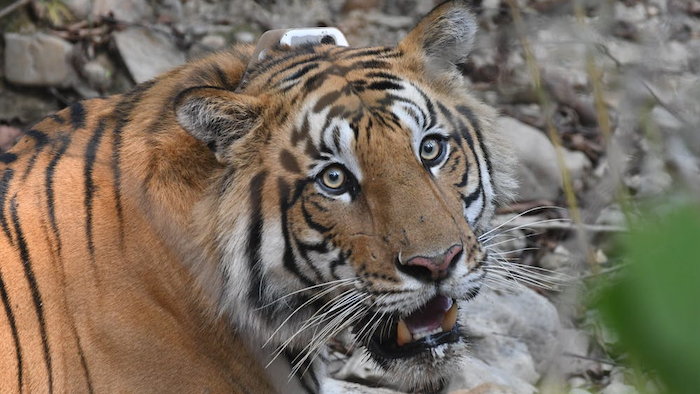 The GPS collar on this tiger in Nepal’s Parsa National Park will help scientists understand how the tiger behaves near and away from roads.
Neil Carter, CC BY-ND

More than 100,000 tigers ranged across Asia a century ago, from the Indian subcontinent to the Russian Far East. Today they are endangered, with only about 4,000 tigers left in the wild. The greatest threats they face are habitat loss and degradation, illegal hunting and declines in their prey.

Thanks to focused conservation efforts, tiger numbers have rebounded in some parts of their range. In Nepal, for example, the wild tiger population has nearly doubled from 121 in 2009 to 235 in 2018. But a road-building boom in Asia could undo this progress.

Land planners and conservation scientists like me need to know much more about how tigers respond to roads and railways so we can find ways to safeguard these animals. We especially need this information for Nepal, which is one of the least-developed countries in the world but is working to expand its economy and raise people out of poverty. Roads and railways are spreading rapidly through the forests and grasslands where tigers live.

Little research has been done on how transportation networks threaten tigers, but the few studies that exist show strong effects. In Russia, for example, vehicle collisions caused 1 in every 12 deaths of tigers monitored from 1992 to 2005. And in China, tigers were five times more likely to occupy areas at least 2.5 miles (4 kilometers) away from roads than they were to be found near roads.

In India, one study estimated that widening highways along with unplanned development would increase tiger extinction risk within protected areas by 56% over 100 years. The growing network of transportation infrastructure in Asia could therefore be disastrous for tigers.

New development projects in Nepal will pass through large tracts of lowland forest that harbor tigers, rhinos and elephants. Nationwide roadways, such as the East-West Highway and the Postal Road, are being upgraded and expanded from two to four lanes to support more fast-moving traffic.

Planners are designing new elevated electrified railways that cut across Nepal, which is about the size of Iowa. A “megahighway” is currently under construction from Nepal’s capital city, Kathmandu, to Nijgadh, where Nepal’s government has sought to build a major international airport for more than 20 years.

Better roads can provide much-needed social and economic benefits in Nepal, but the nation is building them faster than scientists can assess how they affect endangered species like tigers. In Banke National Park, 45 of 67 wild animal deaths between July 2018 and July 2019 – including key tiger prey like sambar deer – were from traffic accidents.

Tiger deaths and injuries from vehicle collisions, while still rare, have increased along major roads over the past few years. Before 2019, only one vehicle collision with a tiger had been recorded along the highway in Bardia National Park. In the past two years, five tigers have been hit by vehicles inside national parks – three in Bardia and two in Parsa National Park.

Vehicle-related deaths make it harder for tigers to move from one population to another, which reduces their genetic diversity. More collisions could elevate tigers’ extinction risk.

Roads also appear to be a nexus for conflict between people and tigers. A tiger in Bardia National Park recently pulled a passenger off the back of a moving motorcycle driving through the park. The tiger killed and ate the person. In the past year, three tigers have killed nine other people in the same area.

To respond to this unprecedented challenge, I am working with colleagues at the Nepal Department of National Parks and Wildlife Conservation, the National Trust for Nature Conservation and the International Union for the Conservation of Nature in Nepal. We are placing GPS collars on tigers living near roads to better understand how transportation infrastructure affects tiger biology and ecology. Our initial focus is on Bardia and Parsa national parks, where transportation development could severely hamper tiger recovery.

Nepal has long been a world leader in tiger research and conservation. The Smithsonian-Nepal Tiger Ecology Project, an international collaboration that started almost 50 years ago, was one of the first to use radio telemetry collars to track tigers for conservation research.

In the past, ecologists would take radio receivers into the field to painstakingly triangulate tigers’ locations once or twice a day in natural landscapes. Our new research project builds on this work by using modern tracking technology to unlock new insights about tigers in landscapes that human development is altering.

The collars connect to GPS satellites many times daily, providing detailed information on tiger locations. This data can show how tigers move along roads before and after crossing; how much energy they expend near and far away from roads; where and how they hunt near roads; how they respond to vehicle traffic at different times of the day; and what their behavior patterns are near roads as compared with far away from roads. By analyzing hormones in feces deposited by the collared tigers, we can even understand the stress they experience near roads.

We already are finding that the East-West Highway bisecting Parsa National Park is blocking the first collared tiger’s movements and constraining its territory. Armed with these insights, we can predict a range of impacts on tiger habitats and populations from new transportation projects. 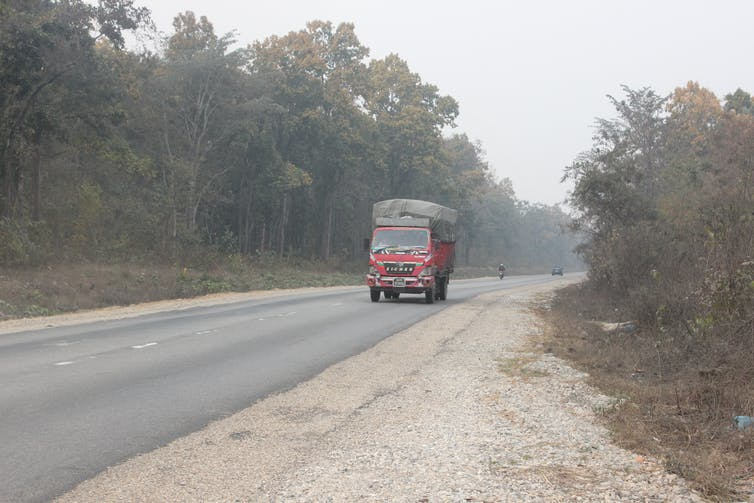 The East-West Highway bisects Nepal’s Parsa National Park, a key area for tiger recovery, and will be widened to four lanes in the next several years.Krishna Hengaju, CC BY-ND

We also can target habitat and prey restoration activities in areas that tigers use frequently or are important for reproduction. Planners can design and locate wildlife crossings to help tigers traverse roads and railways. And we can show where to close roads to vehicular traffic at night or enforce speed restrictions to reduce the risk of tigers being killed in traffic.

Information from the GPS collars can also help reduce tiger-human conflict and improve law enforcement. For example, we can learn whether roads and railroads disrupt tiger hunting strategies, causing them to hunt domestic livestock or people instead of wild prey. Our data can also help wildlife managers respond more quickly to tiger injury, illness or poaching.

Over time, I believe this information will provide evidence-based solutions that can ensure roads work for humans while minimizing harm to tigers and other species at risk.

This article is republished from The Conversation under a Creative Commons license. Read the original article here: https://theconversation.com/gps-tracking-could-help-tigers-and-traffic-coexist-in-asia-158751.