It is the first unmanned sailboat to cross the Atlantic. 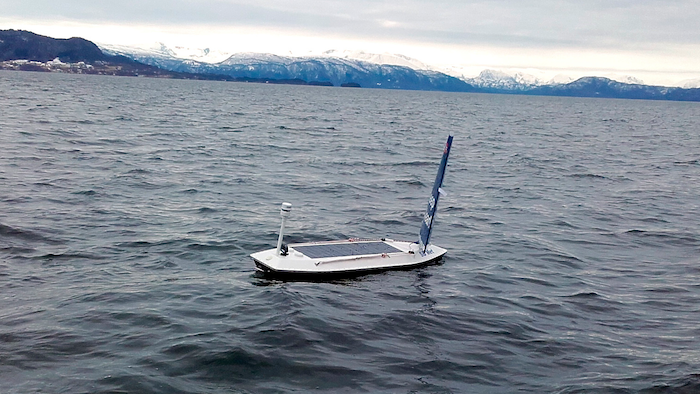 In this photo taken on March 14, 2018 and provided by Offshore Sensing, an autonomous Sailbuoy operated by Norwegian company Offshore Sensing performs a demonstration in the waters of Bjornafjorden, near Bergen, Norway. A Sailbuoy completed the Microtransat Challenge in late August, becoming the first to complete the trans-Atlantic challenge for autonomous vessels since the contest began in 2010.
Anders Barholm Larsen/Offshore Sensing via AP

SOUTHAMPTON, England (AP) — All summer, the small boat drifted steadily eastward across the churning North Atlantic until it neared the Irish coast, where it made history by becoming the first unmanned sailboat to cross the Atlantic.

The SB Met, built by Norwegian company Offshore Sensing AS, reached the finish line of the Microtransat Challenge for robotic boats on Aug. 26, two and a half months after setting off from Newfoundland, according to preliminary data.

It's a milestone that shows the technology for unmanned boats is robust enough to carry out extended missions that can dramatically cut costs for ocean research, border security, and surveillance in rough or remote waters. They're part of wider efforts to develop autonomous marine vessels such as robotic ferries and cargo and container ships that could be operating by the end of the decade, outpacing attempts to commercialize self-driving cars.

"We've proved that it's possible to do," said David Peddie, CEO of Offshore Sensing, which created the oceangoing drones, known as Sailbuoys. "The North Atlantic is one of the toughest areas to cross" and completing the challenge "really proves that it's a long endurance vehicle for pretty much any condition the sea can throw at you," he said.

Under the Microtransat's rules, boats up to 2.4 meters (2.6 yards) long can sail between Europe and the Caribbean or North America and Ireland. They must regularly transmit location data. 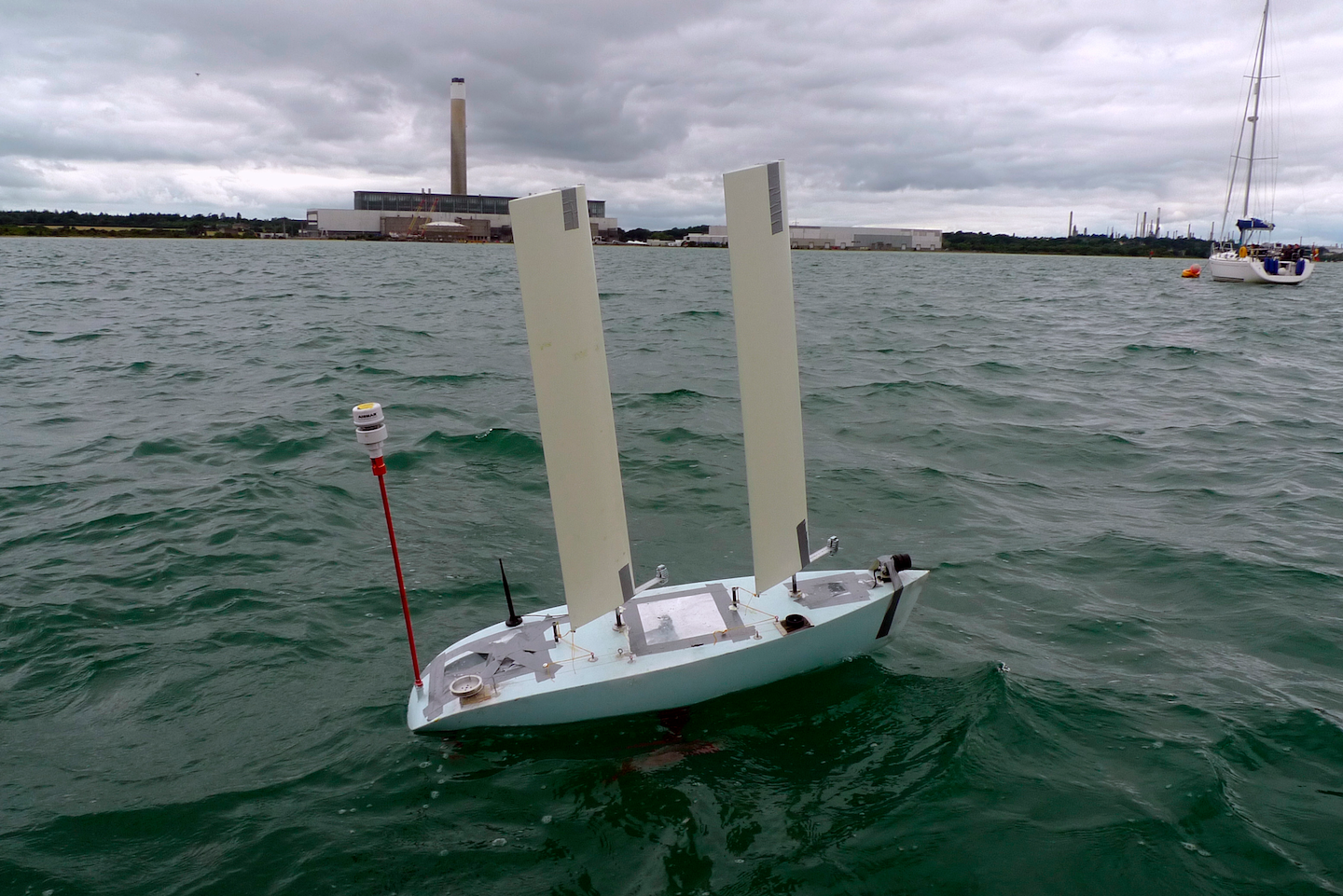 In this photo taken on Monday, Aug. 27, 2018, A robotic boat operated by a team from China’s Shanghai Jiaotong University undergoes testing at the World Robot Sailing Championship in Southampton, England. The contest and a related competition, a trans-Atlantic race known as the Microtransat Challenge, are aimed at stimulating development of autonomous sailboat technology.AP Photo/Kelvin Chan

The Sailbuoy competed in the "unmanned" class, which allows operators to change its course along the way. There's a separate "autonomous" class that prohibits any such communication.

While self-driving cars have to contend with pedestrians and other traffic, autonomous boats face storms that bring fierce gales and high waves as well as numerous seaborne hazards.

More than 20 previous attempts by various teams to complete the Microtransat since it began in 2010 have ended in failure, with robot boats caught in fishing nets, retrieved by ships, or lost, according to the race website. Peddie said his biggest fear was that a passing boat would pick up the two-meter, 60 kilogram (130 pound) vessel as it neared the finish.

The company is in a niche field with few other players. U.S. startup Saildrone is building a fleet of seven-meter "unmanned surface vehicles" that can spend up to 12 months gathering ocean data. Liquid Robotics , owned by Boeing, makes the Wave Glider, a research platform that uses wave rather than wind power for propulsion.

Bigger unmanned ships are coming, too, and the International Maritime Organization is reviewing the safety, security and environmental implications.

Offshore Sensing has built 14 Sailbuoys, which have a surfboard-shaped deck covered in solar panels that power the onboard technology and a rigid trapezoidal sail mounted near the bow that propels the vessel. In company videos, it looks like a toy tossed about by waves and passing ships, making its achievement all the more unlikely.

Peddie says robotic sailboats offer important advantages. Unlike drifting buoys, they can loiter in one place, and they're nimbler and cheaper than research vessels.

"These vehicles can do stuff which you cannot do with a traditional vehicle, especially in dangerous areas," such as a hurricane's path, Peddie said.

Sailbuoys can be fitted with sensors to measure waves, ocean salinity and oxygen levels; echo sounders to look for fish eggs and larvae; or transmitters to communicate with undersea equipment. They sell for about 150,000 euros ($175,000), similar to the cost of renting a research vessel for a few days.

"The great advantage is that you can collect an awful lot of data for very low cost," Peddie said.

Teams from British, French, Finnish and Chinese universities put their machines to the test in a series of challenges including collision avoidance and area scanning, in which vessels have to cover as much of an area as possible.

Self-sailing boats operate on similar principles to self-driving cars. They use sensors to scan their surroundings and feed the data to an artificial intelligence system that gives instructions to the vehicle.

A team from France's ENSTA Bretagne graduate engineering research institute dominated the first challenge, a race around a triangle-shaped course, with their sleek, angular fluorescent-green carbon fiber boat. Servo winches controlled the two transparent plastic sails and the rudder as wind, GPS and compass sensors fed readings to an onboard computer.

Others didn't fare so well. One of the two Chinese teams couldn't stop their boat from being pushed way off course by the strong tide.

"Other ships are thin and long. Ours is too wide and fat," said Hou Chunxiao of the Shanghai Jiaotong University team, a joint collaboration between students and staff from a maritime company run by their thesis supervisor.

"We talk more about autonomous cars or drones, but sailboats are also a big thing," said Ulysse Vautier, of the Plymouth University team. "There's so much to discover on the ocean. With the environmental and ecological problems we face today," autonomous sailing boats are an energy-efficient way to do ocean research, Vautier said, adding that future uses could include swarms of sailing drones scanning the sea floor for the missing Malaysian Airlines flight MH370.

Until Sailbuoy's achievement, the only unmanned watercraft to cross the Atlantic previously was a battery-powered underwater glider in 2009. Now, more milestones are quickly looming on the horizon line after its feat, said Colin Sauze, the Microtransat's coordinator. A team from Canada's Dalhousie University is making progress in achieving a trans-Atlantic crossing under the "autonomous" rules, when the boat's direction is not adjusted remotely during the trip.

And there will be new variations of the contest to come.

Now, Sauze said, "the challenge is to do it faster, cheaper and do it with a smaller boat."