UK PM May: I Won't Agree on a Brexit Deal 'at Any Cost'

British Prime Minister Theresa May said Tuesday that she wouldn't agree upon a Brexit deal with the European Union "at any cost," as the two sides remained deadlocked on the issue of the Irish border. 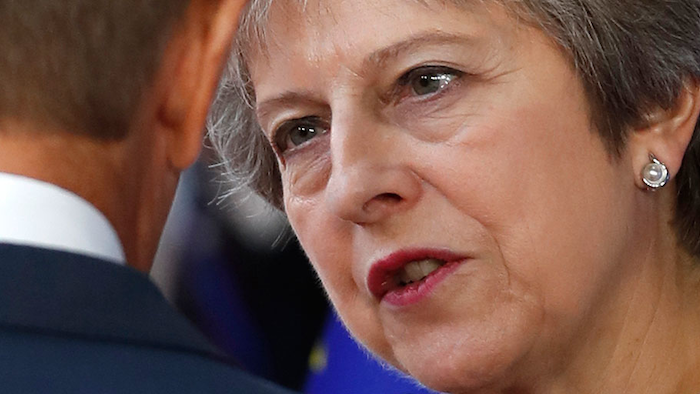 LONDON (AP) — British Prime Minister Theresa May said Tuesday that she wouldn't agree upon a Brexit deal with the European Union "at any cost," as the two sides remained deadlocked on the issue of the Irish border.

May briefed her Cabinet on progress toward an elusive divorce deal with the bloc. Talks are stuck on finding a way to ensure there are no customs posts or other checks along the border between the U.K.'s Northern Ireland and EU member Ireland.

The two sides are working on proposed solutions involving a common customs arrangement for the U.K. and the EU. But May faces pressure from some Cabinet members not to agree to a solution that binds Britain to EU trade rules indefinitely after it leaves the bloc in March.

May spokesman James Slack said she told the ministers she was confident of reaching a deal, but "while the U.K. should aim to secure a withdrawal agreement as soon as possible, this should not be done at any cost."

With Britain due to leave the EU on March 29, May is running out of time to find an agreement that is acceptable both to her divided Conservative government and to fellow EU nations.

Chief EU negotiator Michel Barnier said the two negotiating teams are not yet close to an agreement.

He told Belgian broadcaster RTBF that "there is still a real point of divergence on the way of guaranteeing peace in Ireland, that there are no borders in Ireland, while protecting the integrity of the single market."