China's manufacturing activity fell to a two-year low in October as domestic demand weakened, an official measure showed Wednesday, adding to pressure on Beijing to shore up economic growth amid a tariff war with Washington. 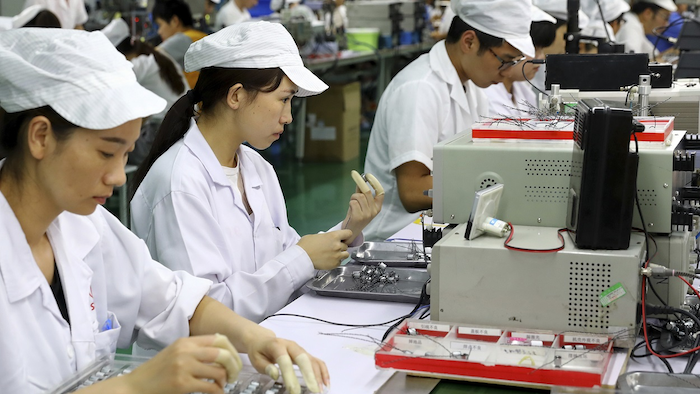 BEIJING (AP) — China's manufacturing activity fell to a two-year low in October as domestic demand weakened, an official measure showed Wednesday, adding to pressure on Beijing to shore up economic growth amid a tariff war with Washington.

The purchasing managers' index of the National Bureau of Statistics and an industry group, the China of Logistics and Purchasing, fell to 50.2 from September's 50.8 on a 100-point scale on which numbers above 50 show activity expanding.

Export orders weakened but the biggest impact was from cooling domestic demand. Auto and real estate sales have slumped since Beijing tightened lending controls last year to rein in a debt boom.

Chinese exports to the United States have been unexpectedly resilient since U.S. President Donald Trump's first tariff hikes took effect in July in a battle over Beijing's technology policy.

Some of that is due to exporters rushing to fill orders ahead of duty increases. But producers of higher-value-added goods such as factory and medical equipment express confidence they can keep their U.S. market share even with higher prices.

"Softer foreign demand doesn't appear to be the main culprit," said Julian Evans-Pritchard of Capital Economics in a report.

The monthly measure for new orders tumbled 1.2 points to 50.8, according to NBS and the logistics federation. The new export order index declined 1.1 points to 46.9.

The report gave no details on U.S. demand for Chinese goods, but exports to the United States have risen by at least 13 percent over a year earlier each month since Trump's first tariff hikes.

The tariff impact "could become more material" if companies start to shift supply chains out of China to avoid higher U.S. charges, said the Citigroup economists.

China's $12 trillion-a-year economy already was cooling as communist leaders tried to steer it toward more self-sustaining growth based on domestic consumption instead of exports and investment.

Economic growth in the three months ending in September slipped to 6.5 percent over a year earlier from the previous quarter's 6.7 percent. It was the slowest rate since early 2009 during the global financial crisis.

The relative strength of China's economy has allowed President Xi Jinping's government to reject pressure for changes in initiatives such as "Made in China 2025" that call for state-led creation of champions in robotics and other technologies.

The International Monetary Fund and other forecasters expect this year's economic growth to fall to about 6.5 percent from 2017's 6.8 percent.

Beijing tightened lending controls last year to rein in surging debt. But the downturn was unexpectedly abrupt, prompting the ruling party to reverse course and pump money into the economy by easing lending controls and boosting government spending on public works.

Such support "has yet to fully offset broader downward pressure," said Evans-Pritchard. He said Beijing will need to ease credit controls and step up spending "help put a floor beneath growth."

Japan to Try US Men Accused of Helping Ghosn Flee

It is part of a broader effort to cut the environmental footprint of manufactured goods by making them more durable and energy efficient.
Mar 1st, 2021

The U.S. accuses Huawei of using a shell company to sell equipment to Iran in violation of U.S. sanctions.
Mar 1st, 2021

Shipload of Cattle to be Killed After 2 Months at Sea

Two ports have failed to allow the cattle to disembark.
Mar 1st, 2021

The economic outlook and renewed disease outbreaks abroad that have prompted governments to reimpose business and travel curbs.
Mar 1st, 2021

"As Texans struggled to survive this winter storm, Griddy made the suffering even worse as it debited outrageous amounts each day."
Mar 1st, 2021

China Not Ready to Bring Back 737 Max

A look at how pharmaceutical processors are utilizing new tools, including AI, to ensure production reliability while eliminating downtime.
Feb 26th, 2021

How supply chain factors, investment decisions and a new administration will all play key roles in manufacturing's near future.
Feb 26th, 2021

In Israel, home to the world's fastest vaccination program, a "green passport" is the coin of the realm.
Feb 26th, 2021

At least 40 people died as a result of the storm, and 10 days after the blackout started, more than 1 million people were still under boil-water notices.
Feb 26th, 2021
Follow Us
Most Recent