China on Monday promised retaliation if U.S. President Donald Trump escalates their tariff battle, raising the risk Beijing might target operations of American companies as it runs out of imports for penalties. 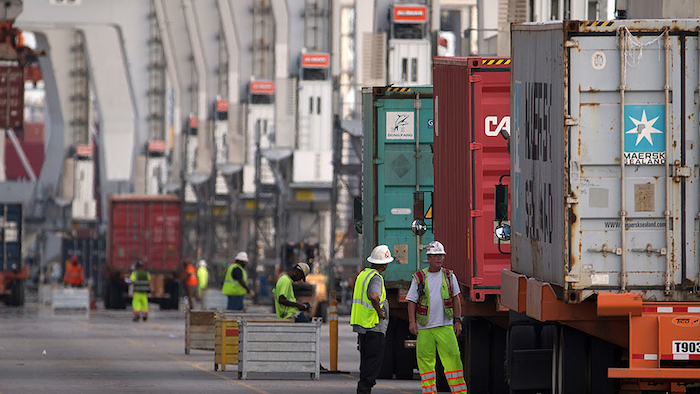 BEIJING (AP) — China on Monday promised retaliation if U.S. President Donald Trump escalates their tariff battle, raising the risk Beijing might target operations of American companies as it runs out of imports for penalties.

The threat came after Trump said Friday he was considering extending penalties to an additional $267 billion of Chinese products in their battle over Beijing's technology policy. That would be on top of $50 billion of goods already hit by 25 percent duties and another $200 billion on which Washington is poised to raise tariffs.

"If the United States insists on imposing another round of tariffs on Chinese products, China will definitely take countermeasures to safeguard its legitimate rights and interests," foreign ministry spokesman Geng Shuang said.

Geng gave no details, but the government said in June it would impose unspecified "comprehensive measures" if necessary. That left American companies on edge about whether Beijing might use its control over the heavily regulated economy to disrupt their operations by withholding licenses or launching tax, anti-monopoly or other investigations.

China matched Washington's first round of tariff hikes on $50 billion of its goods, but their lopsided trade balance means Beijing is running out of imports for retaliation. The United States imported $3 of Chinese goods last year for every $1 of American goods bought by China.

Chinese leaders agreed in May to narrow that trade gap by purchasing more American soybeans and other products. But they reject Trump's demand to roll back official industry plans such as "Made in China 2025," which calls for state-led creation of global champions in robotics, artificial intelligence and other technologies.

China's exports to the United States have been unexpectedly resilient, rising by double digits in July and August despite the U.S. tariff hikes. That might add to Washington's frustration and prompt more import controls.

Beijing matched Washington's first round of tariffs on $50 billion of goods. But after Trump's threat to target another $200 billion of goods in a second round of increases, China issued a list of only $60 billion of American products for possible retaliation.

China's imports from the United States last year totaled $153.9 billion. After the earlier tariffs targeting $50 billion of U.S. goods, that leaves barely $100 billion for retaliation, or half of Trump's $200 billion list of goods for the second round of tariffs.

Chinese regulators have so far targeted farm goods and other exports from states that supported Trump in the 2016 election.

They have tried to minimize the blow to China's economy by picking U.S. goods for which alternatives are available elsewhere, such as soybeans from Brazil, natural gas from Russia or pork from Germany.

Chinese regulators have shown their willingness to attack foreign companies in disputes with other governments.

Last year, Beijing destroyed South Korean retailer Lotte's business in China after the company sold a golf course in South Korea to its government for construction of a missile defense system opposed by Chinese leaders.

Beijing closed most of Lotte's 99 supermarkets and other outlets in China. Seoul and Beijing later mended relations, but Lotte gave up and sold its China operations.

China's entirely state-controlled media also have encouraged consumer boycotts against Japanese, South Korean and other products during disputes with those governments.