The Trump administration delivered a gut punch to America's closest allies Thursday, imposing tariffs on steel and aluminum from Europe, Mexico and Canada in a move that drew immediate vows of retaliation. 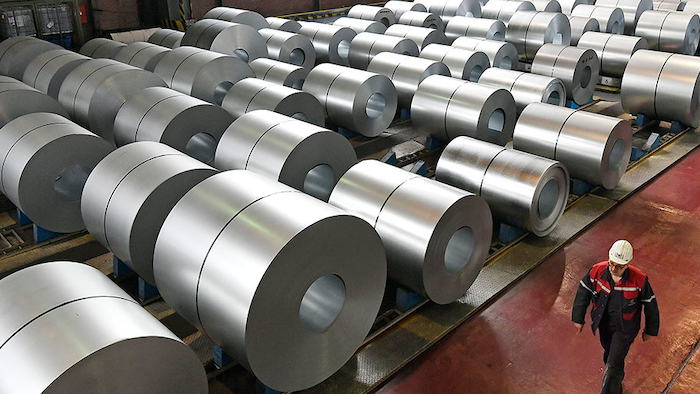 WASHINGTON (AP) — The Trump administration delivered a gut punch to America's closest allies Thursday, imposing tariffs on steel and aluminum from Europe, Mexico and Canada in a move that drew immediate vows of retaliation.

Stock prices slumped amid fears of a trade war, with the Dow Jones industrial average falling nearly 252 points, or 1 percent, to 24,415.84.

The import duties threaten to drive up prices for American consumers and companies and are likely to heighten uncertainty for businesses and investors around the globe.

President Donald Trump had originally imposed the tariffs in March, saying a reliance on imported metals threatened national security. But he exempted Canada, Mexico and the European Union to buy time for negotiations — a reprieve set to expire at midnight Thursday.

Other countries, including Japan, America's closest ally in Asia, are already paying the tariffs.

The administration's actions drew fire from Europe, Canada and Mexico and promises to quickly retaliate against U.S. exports.

"This is protectionism, pure and simple," said Jean-Claude Juncker, president of the European Commission.

French President Emmanuel Macron called the U.S. decision to levy tariffs on the European Union "illegal" and a "mistake." He ominously recalled the pre-World War II period saying, "Economic nationalism leads to war. This is exactly what happened in the 1930s."

The EU earlier threatened to counterpunch by targeting U.S. products, including Kentucky bourbon, blue jeans and motorcycles. David O'Sullivan, the EU's ambassador in Washington, said the retaliation will probably be announced in late June.

Mexico complained that the tariffs will "distort international trade" and said it will penalize U.S. imports including pork, apples, grapes, cheeses and flat steel.

In Canada, Prime Minister Justin Trudeau said: "These tariffs are totally unacceptable." Canada announced plans to slap tariffs on $12.8 billion worth of U.S. products, ranging from steel to yogurt and toilet paper.

"Canada is a secure supplier of aluminum and steel to the U.S. defense industry, putting aluminum in American planes and steel in American tanks," Trudeau said. "That Canada could be considered a national security threat to the United States is inconceivable."

Trump had campaigned for president on a promise to crack down on trading partners that he said exploited poorly negotiated trade agreements to run up big trade surpluses with the U.S.

The U.S. tariffs coincide with — and could complicate — the Trump administration's separate fight over Beijing's strong-arm tactics to overtake U.S. technological supremacy. Ross is leaving Friday for Beijing for talks aimed at preventing a trade war with China.

The world's two biggest economies have threatened to impose tariffs on up to $200 billion worth of each other's products.

The steel and aluminum tariffs could also complicate the administration's efforts to renegotiate the North American Free Trade Agreement with Canada and Mexico, a pact that Trump has condemned as a job-killing "disaster."

The White House released a statement from Trump Thursday night saying of NAFTA, "Earlier today, this message was conveyed to Prime Minister Justin Trudeau of Canada: The United State (sic) will agree to a fair deal, or there will be no deal at all."

Trump had offered the two U.S. neighbors a permanent exemption from the steel and aluminum tariffs if they agreed to U.S. demands on NAFTA. But the NAFTA talks stalled.

Ross said there was "no longer a very precise date when they may be concluded," and that as a result, Canada and Mexico were added to the list of countries hit with tariffs.

Likewise, the Trump trade team sought to use the tariff threat to pressure Europe into reducing barriers to U.S. products. But the two sides could not reach an agreement.

The import duties will give a boost to American makers of steel and aluminum by making foreign metals more expensive. But companies in the U.S. that use imported steel will face higher costs.

And the tariffs will allow domestic steel and aluminum producers to raise prices, squeezing companies — from automakers to can producers — that buy those metals.

House Speaker Paul Ryan and several leading Republicans in Congress were critical of the administration's tariff action. Ryan said there are better ways to help American workers and consumers and that he plans to work with Trump on "those better options."

Prices started rising even before all the tariffs kicked in. Stripmatic Products, an auto parts supplier in Cleveland, has seen a 40 percent increase in the price of steel. The higher cost meant it lost out this year to a Chinese company on a contract to branch out into a new market: making food-processing equipment.

"We were basically eliminated from contention," said Stripmatic president Bill Adler. He said the company needed four or five years to recover the last time the U.S. imposed tariffs on steel, in 2002.

Measured purely in dollars, the tariffs don't amount to much in America's $20 trillion economy. Speaking on CNBC on Thursday, Ross called the tariffs "blips on the radar screen."

But Oliver Rakau, an economist with Oxford Economics, warned that the tariffs could cause economic damage because "the specter of an escalation is likely to weigh on business sentiment and may derail the investment recovery."

The Trump administration is turning to a little-used weapon in trade policy: Section 232 of the Trade Expansion Act of 1962. It empowers the president to restrict imports and impose unlimited tariffs if the Commerce Department sees a threat to national security.

Europe, Japan and other U.S. trading partners are contesting the U.S. tariffs at the World Trade Organization.

The WTO gives countries broad leeway to determine national security interests. But there was an unwritten agreement that WTO member countries would use the national-security justification sparingly to avoid abuses.

Now that Trump has broken the taboo, critics fear that other countries will impose sanctions.

Critics say the steel and aluminum tariffs would do little to address the real problem plaguing metals producers around the world: massive overproduction by China that has flooded world aluminum and steel markets. Canada, a staunch U.S. ally, is the largest supplier of steel and aluminum to the United States.

Ross said negotiations with Mexico, Canada and the EU can continue even once the tariffs are in place.

But Philip Levy, senior fellow at the Chicago Council on Global Affairs and a former White House trade adviser, said: "I don't think this is prelude to a series of deals. If anything, this kills the possibility of deals."

If the U.S. can impose tariffs any time it declares imports a threat to national security, Levy asked, "Why would anyone want to negotiate with us?"

The space telescope snapped the picture last month when the planet was 406 million miles away.
Sep 18th, 2020

The overwhelmed Commerce Department could not meet its own deadline for processing around three-fourths of the requests.
Sep 16th, 2020
Follow Us
Most Recent