A Chinese company that manufactured Ivanka Trump shoes and has been accused of serious labor abuses is being celebrated in a blockbuster propaganda film for extending China's influence around the globe. 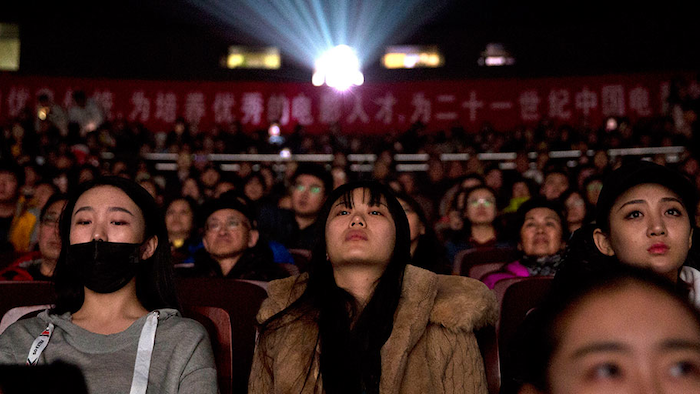 SHANGHAI (AP) — A Chinese company that manufactured Ivanka Trump shoes and has been accused of serious labor abuses is being celebrated in a blockbuster propaganda film for extending China's influence around the globe.

The state-backed documentary "Amazing China" portrays the Huajian Group as a beneficent force spreading prosperity — in this case, by hiring thousands of Ethiopians at wages a fraction of what they'd have to pay in China. But in Ethiopia, Huajian workers told The Associated Press they work without safety equipment for pay so low they can barely make ends meet.

"I'm left with nothing at the end of the month," said Ayelech Geletu, 21, who told the AP she earns a base monthly salary of 1,400 Birr ($51) at Huajian's factory in Lebu, outside Addis Ababa. "Plus, their treatment is bad. They shout at us whenever they want."

With epic cinematography, "Amazing China" — produced by China Central Television and the state-owned China Film Group Co. Ltd. — articulates a message of how China would like to be seen as it pursues President Xi Jinping's vision of a globally resurgent nation, against a reality that doesn't always measure up.

China's ruling Communist Party recently announced it would take direct control of major broadcasters and assume regulatory power over everything from film and TV to books and news.

As the party deepens its ability to cultivate "unity of thought" among citizens, "Amazing China" demonstrates the scope of China's propaganda machine, which not only crafted a stirring documentary about China's renaissance under Xi but also helped manufacture an adoring audience for it.

The movie, which weaves together extraordinary feats of engineering and military, environmental and cultural achievements, hit theaters three days before China's rubber-stamp legislature convened to amend the constitution and allow Xi to potentially rule China for life.

The star — duly noted by IMDb.com — is Xi himself, who appears more than 30 times in the 90-minute film.

"Amazing China" presents Huajian as an inspiring example of China exporting the success of its own economic miracle by creating transformative jobs for thousands of poor Ethiopians and sharing China's knowledge, language and can-do discipline to build a new industrial foundation for Ethiopia's economy. 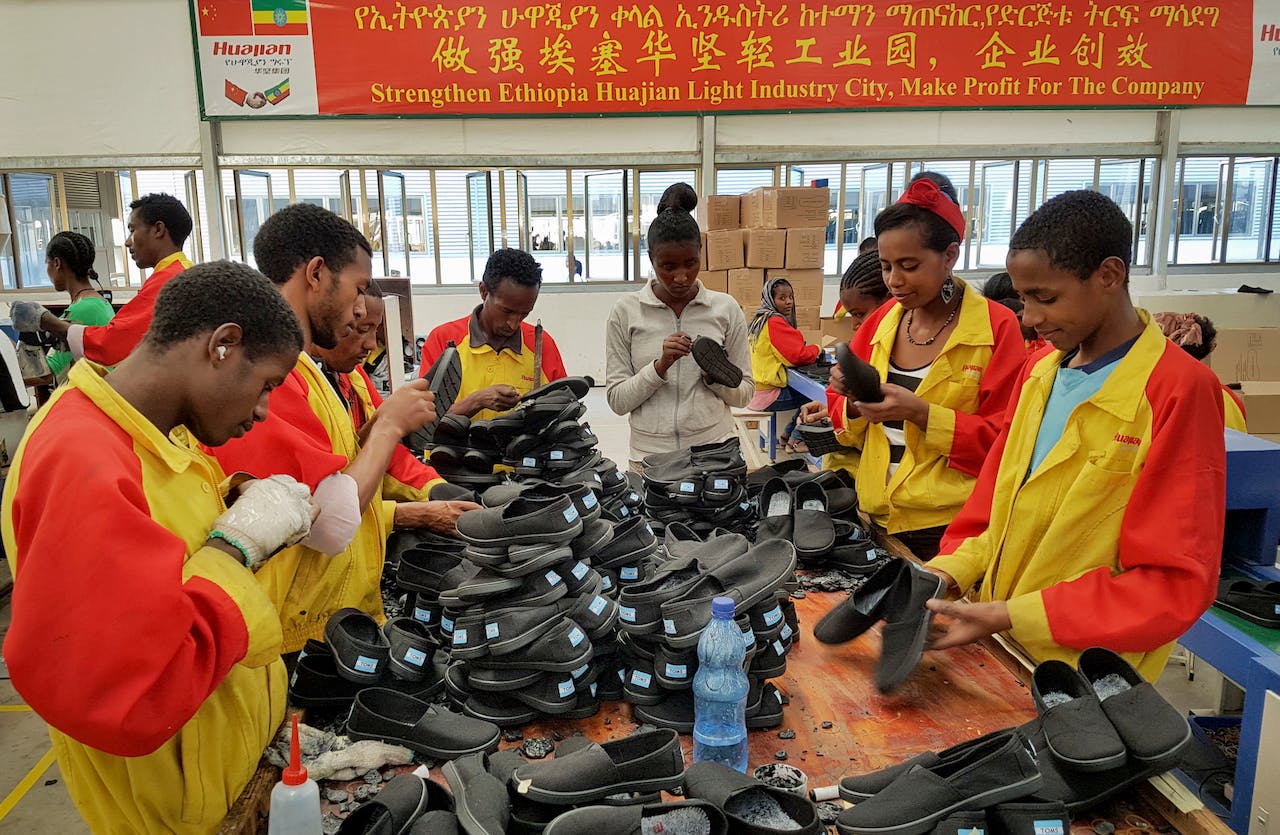 In this Thursday, Jan. 5, 2017, file photo, Ethiopian factory workers sort through shoes at the Chinese company Huajian's plant in the Lebu Industrial complex near Addis Ababa, Ethiopia. The company that manufactured Ivanka Trump shoes and has been accused of serious labor abuses is being celebrated in a blockbuster propaganda film for extending China's influence around the globe. (AP Photo/Elias Meseret, File)

The company is celebrated as a model of the inclusiveness at the heart of a much larger project: Xi's signature One Belt One Road initiative, a plan to spread Chinese infrastructure and influence across dozens of countries so ambitious in scope that it's been compared to the U.S.-led Marshall Plan after World War II.

"In opening to the outside world, China's pursuit is not to only make our lives better, but to make the lives of others better," the narrator says.

In the film, Huajian chairman Zhang Huarong stands before neat rows of Ethiopian workers singing a song about unity, describing himself as a father to his employees, who "like me very much."

But four current and former Huajian employees told the AP their wages were so low that they struggled to pay their bills. They said they had no protective gear, were forced to work 12 hours a day and participate in military-style physical drills, were not permitted to form a union and were regularly yelled at by their Chinese managers.

All that made it hard for them to relate to the inspirational video about Huajian circulated by mobile phone with its sweeping shots of a gleaming factory and a soundtrack that repeats in operatic Mandarin: "Huajian has come, Huajian has come ... holding the torch of hope."

"If someone complains, he will be accused of disturbing the workplace and will be fired right away," said Ebissa Gari, a 22-year-old who estimated he earns 960 Birr ($35) a month. "That's why we keep quiet and work no matter how much we are subdued."

"There are chemicals that hurt our eyes and nose, and machines that cut our hands," he said. "They have no idea about hand gloves! If you refuse to work without that protective gear, then you will be told to leave the company."

Huajian declined the AP's requests for comment. Ivanka Trump's brand said it no longer does business with Huajian and "has always and continues to take supply chain integrity very seriously."

Huajian's investment in Ethiopia was part of a government-led industrialization drive. In the last few years, Ethiopia's leaders and business allies came under intense criticism, with more than 300 businesses attacked by protesters who saw them as bolstering a repressive regime.

These days, armed soldiers stand guard at the entrance to the Eastern Industrial Zone in Ethiopia's Oromia region, where Huajian opened its first factory.

Six years after the company's arrival, the dream of turning Ethiopia into a shoe-manufacturing hub remains unrealized, and few harbor illusions about the main incentive for Huajian's investment in a country where there is no legal minimum wage.

"These companies are moving out of Asia and coming to Africa to save labor costs," said Fitsum Arega, who recently stepped down as head of the Ethiopian Investment Commission to become an adviser to the new prime minister. He praised Huajian for employing more than 5,000 Ethiopians, but said the company "could have done better."

"I'm not saying all employees are happy and there are no abuses here and there," Arega said, adding that the government pushes companies to protect workers. "There's a labor law which actually the companies say favors the employees."

The Chinese-owned Eastern Industrial Zone effectively took fertile land from Ethiopian farmers and handed it over to foreign investors — a strategy the Ethiopian government is rethinking, according to Nemera Mamo, a teaching fellow in economics at the University of London.

"You can clearly see that these industrial zones are absolutely favorable to the Chinese investors, but not to the local communities or the local private investors," he said. Huajian workers told the AP they made 960 Birr ($35) to 1,700 Birr ($62) a month. A basic living wage in Ethiopia is about 3,000 Birr ($109) a month, according to Ayele Gelan, a research economist at the Kuwait Institute for Scientific Research.

Huajian is Ethiopia's largest shoe exporter, shipping out $19.3 million worth of goods last fiscal year, according to Ethiopia's Leather Industry Development Institute. But coffee producer Mullege PLC said it exported $42 million worth of coffee during the same period and that other companies export even more.

Huajian's record within China also has been troubled. In at least five cases since 2015, Huajian sued workers in Chinese court rather than pay compensation mandated by a government arbitration panel. Huajian lost every case, court records show, and the court had to freeze Huajian's assets to get one worker the 44,174 yuan ($7,000) he was owed.

Last year, Huajian found itself entangled in labor and human rights controversies that made global headlines but attracted little attention in China's official media. Three men working with the New York-based non-profit group China Labor Watch were arrested after their investigation of Ivanka Trump's suppliers zeroed in on Huajian. The men are out on bail, but remain under police surveillance.

China Labor Watch founder Li Qiang said Huajian's factory in Ganzhou, in southeastern Jiangxi province, had some of the worst conditions he has ever encountered, including excessive overtime, low pay, and verbal and physical abuse.

Huajian has called those allegations "completely not true to the facts, taken out of context, exaggerated" and accused the investigators of conducting industrial espionage — a charge that was parroted in China's party-controlled media.

Wei Tie, the director of "Amazing China," said he wasn't aware of the controversy surrounding Huajian until the AP informed him. That's not too surprising given the years of positive coverage of Huajian in party-controlled media and the fact that many foreign news sites, especially Chinese-language ones, are blocked inside China.

Wei said he included the company in the film because it is "introducing China's experience of prosperity to Africa."

He said he prefers to focus on the good. "What I did was absorb the essence and discard the dross," he said, citing a longstanding aphorism of Chinese political thought.

Wei attributed this success to the "spontaneous feeling" of citizens inspired by the arc of tremendous progress they've witnessed, a national rejuvenation forged with sweat and skill that he compared to Europe's Renaissance and the pioneering days of the American republic.

In Shanghai, midday screenings during the week sold out immediately, suggesting either unquenchable public appetite or organized bulk ticket sales.

None of the viewers surveyed by AP had purchased their own tickets. Instead, they said they got them from state-run companies, neighborhood committees or government departments that handed them out as part of their "party building work."

Douban, a popular film review website, blocked users from rating and commenting on the movie. The only entries came from official media, which gave it an 8.5 out of 10 ranking. On IMDb.com, a subsidiary of Amazon, "Amazing China" earned only one star.

But for some, "Amazing China" is balm for old feelings of inferiority and a welcome reaffirmation that China is ready to resume its rightful place in the community of great nations.

"I did not know how good our country is until I watched this movie," said Zuo Qianyi, a 68-year-old retiree. "I have been to many countries, Britain, Spain, and they are not as good as China, at least not as Shanghai. I am very happy, and I will love my country more."

The company will provide spare parts, material and engineering support for an entire fleet of helicopters.
May 23rd, 2022

Heineken is one of the largest brewers on the planet — but that's not enough in the current market.
May 23rd, 2022

It will also produce vehicle batteries.
May 23rd, 2022

The tunnel is part of a mountainous highway tunnel system that was under construction.
May 23rd, 2022

Air Force planes were used because no commercial flights were available.
May 23rd, 2022

The only other time Boeing’s Starliner flew in space, it never got anywhere near the station.
May 23rd, 2022

Digi-Key was recognized for its sales results, customer service, breadth of product and digital presence.
May 20th, 2022

Such cases have met with mixed success.
May 20th, 2022
Follow Us
Most Recent