A survey by the World Economic Forum finds that more than nine in 10 experts are worried about worsening economic or political confrontation between world powers, amid a trend toward "charismatic strongman politics." 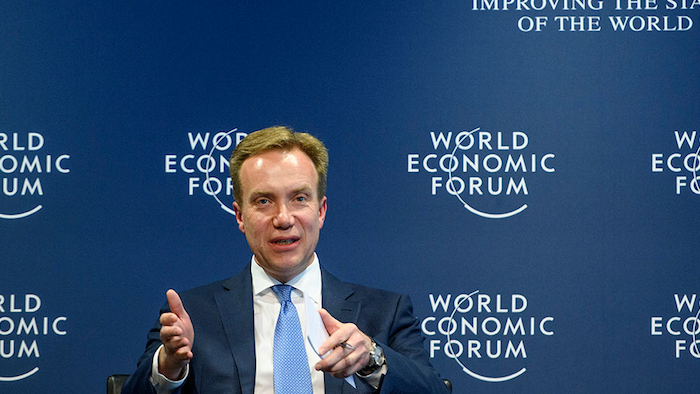 GENEVA (AP) — A survey by the World Economic Forum finds that more than nine in 10 experts are worried about worsening economic or political confrontation between world powers, amid a trend toward "charismatic strongman politics."

The WEF, the organizer of the annual Davos conference that convenes next week, cites a "deteriorating geopolitical landscape" and increasing cyber threats as key factors behind a pessimistic outlook this year — adding to continued and pre-eminent worries about the environment.

Its Global Risks Report released Wednesday is based on a survey of nearly 1,000 experts and decision-makers from business, academia and other fields about 30 risks over a 10-year horizon. The report notes that a global economic rebound can help solve some problems, but it also pointed to increasingly complex challenges.

"Global risks, nowadays, are so interconnected that they can threaten the very systems on which our societies, economies, and international relations are based," said Alison Martin, chief risk officer at Zurich Insurance Group, which contributed to the report, at a London news conference.

Margareta Drzeniek-Hanouz, a WEF executive committee member focusing on economic progress, called the results "striking." She noted that on "political and economic confrontations, 93 percent of the respondents think they will increase somewhat or significantly ... in the coming year."

The report said geopolitical risks have been exacerbated by falling commitment to "rules-based multilateralism." It noted how President Donald Trump "delivered on some of his unilateralist campaign pledges" by pulling the U.S. out of the Paris climate accord and a trans-Pacific trade pact.

"Charismatic strongman politics is on the rise across the world," it said. "In addition to the 'America First' platform of President Trump, variations on this theme can be seen in numerous countries from China to Japan, Russia, Turkey, Saudi Arabia, the Philippines and elsewhere."

The report said last year's clash of "strong-state instincts" of Trump and North Korean leader Kim Jong Un "has created uncertainty about the strength of the norms created by decades of work to prevent nuclear conflict."

WEF also said geopolitical tensions are fanning an increase in the scale and sophistication of cyberattacks, and suggests greater investment in prevention is needed.

John Drzik, president of global risk and digital at insurer Marsh & McLennan Companies, pointed to the prospects of "more state-sponsored attacks — to add to the financially motivated attacks that are already out there."

He suggested too few companies have a cyber-incident response plan in place.

The WEF risk report is expected to foment discussion in some of the 400 panel talks next week in the Swiss Alpine town of Davos.

Trump is set to deliver a speech on the last day of the Jan. 23-26 event. He is to be among 70 heads of state or government who are expected to be on hand, along with hundreds of business executives, academics, government officials, artists and other notables.