Free trade and international cooperation must be upheld to avoid slowing down the global economy, the Chinese premier told peers from central and eastern Europe Saturday. 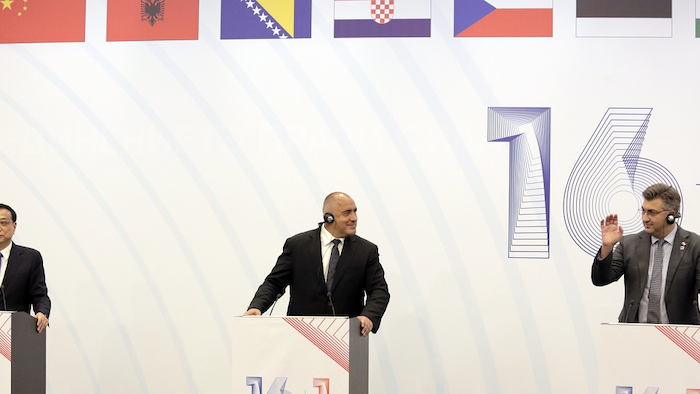 Croatian PM Andrej Plenković speaks during joint news conference along with Bulgarian PM Borissov, center and Li Keqiang, Premier of the State Council of the People's Republic of China, at the press conference, National Palace of Culture in Sofia during the 7th Summit of Heads of Government of CEEC and China, on Saturday July 7, 2018. Image credit: AP Photo/Valentina Petrova

Free trade and international cooperation must be upheld to avoid slowing down the global economy, the Chinese premier told peers from central and eastern Europe Saturday.

Li, China's No. 2 leader behind President Xi Jinping, attended a gathering in Bulgaria's capital, Sofia, with government leaders from 16 European countries amid escalating trade battles between the United States and China.

The 16+1 meeting of the central and eastern European nations and China is part of China's $900 billion "New Silk Road" plan to boost its influence in Europe through investments and closer economic links.

Countries around the world were affected by the global financial crisis that started in 2008 and which led to banking crises and the so-called "Great Recession," especially in the U.S. and Europe, where growth has improved over the past few years.

China's efforts to increase its economic and financial influence in the European Union, which include the financing and construction of new roads, rail lines and ports, have been met with concern by Brussels. EU officials are in part worried that subsidized Chinese companies will have a market advantage without reciprocal deals for European firms.

Li downplayed such concerns, calling views that China is trying create rifts in Europe by pursuing deals with eastern European countries a "misunderstanding."

"There is no fundamental conflict of interests between China and Europe," Li said.

China and the 16 countries at the summit "need to carefully study how our cooperation can fit in with the EU laws and regulations," Li said. "China and Europe are geographically far apart from each other and we have different cultures, so when Chinese business people make investments here, they need to have more knowledge of Europe."

While U.S. President Donald Trump frequently has criticized the EU on trade and security issues and the two powers are in the middle of their own tariff battles, Li was very complimentary of the EU.

China and some of the 16 countries at the summit signed memorandums and agreements on economic cooperation and other issues.

Li said China would like to import more agricultural products from central and eastern Europe and was interested in buying up to 10 million tons of tobacco leaves from Bulgaria.

At the same time, the premier said it was "very important" for Chinese companies to set up factories in the region, noting that Chinese products were popular with consumers.

"First and foremost, our cooperation is of win-win and mutual benefit," Li insisted.