President Donald Trump threatened anew Monday to impose a "reciprocal tax" on countries that he says abuse their trade relationships with the U.S., promising to release more details this week. 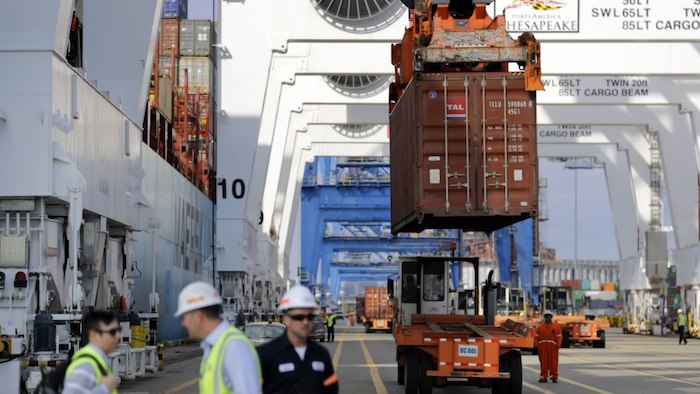 WASHINGTON (AP) — President Donald Trump threatened anew Monday to impose a "reciprocal tax" on countries that he says abuse their trade relationships with the U.S., promising to release more details this week.

But White House aides said no immediate action was expected.

Trump mentioned the plan during a White House meeting with a group of governors and local leaders who were invited to discuss the $1.5 trillion infrastructure proposal he sent to Congress on Monday.

Trump has floated the idea of a reciprocal tax in the past, promising to slap it on countries, including allies, that take advantage of the United States.

The president also addressed ongoing negotiations over the North American Free Trade Agreement and complained that Canada, which is a party to that trade pact along with Mexico and the U.S., doesn't treat the U.S. well. He also complained about Mexico's treatment of the U.S.

He also complained about the U.S. losing "vast amounts of money" in trade with China, Japan, South Korea and other countries.

"It's a little tough for them, because they've gotten away with murder for 25 years," he said. "But we're going to be changing policy."

About 200 Olympians and Paralympians are affiliated with Toyota.
Jul 19th, 2021

The chairman of Dawu Agriculture Group was arrested after trying to stop a state-owned enterprise from demolishing a company building.
Jul 16th, 2021

There could be 17.5 billion undiscovered barrels of oil and 148 trillion cubic feet of natural gas off Greenland.
Jul 16th, 2021

The donation comes as the richest man in the world prepares to fulfill his childhood dream of traveling to space.
Jul 14th, 2021

It's been a long and difficult road that started with many unknowns for both the state and the space tourism company.
Jul 13th, 2021

China has denied allegations of arbitrary detention and forced labor in the far western region of Xinjiang.
Jul 12th, 2021

The Key to Supply Chain Resiliency Could Be a Circular Approach

"Every time we continue with the take, make, waste model ... we perpetuate the depletion and unsustainability of supply chains."
Jul 4th, 2021
Follow Us
Most Recent