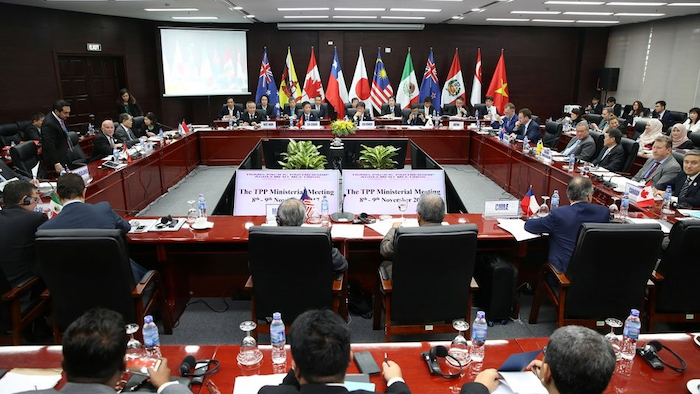 Talks aimed at salvaging a Pacific Rim trade pact rejected by U.S. President Donald Trump continued Thursday on the sidelines of a regional summit, but prospects for an agreement remain uncertain.

The negotiations on the Trans-Pacific Partnership are being held in Danang, Vietnam, alongside meetings of the 21-member Asia-Pacific Economic Cooperation forum, where Trump's markedly different stance from past U.S. leaders was being felt even before his arrival Friday in the coastal resort city.

While most APEC members say they remain committed to their multi-country approach in weaving their economies ever closer together, many acknowledge that open trade is a mixed bag: Not everyone benefits equally.

Philippine President Rodrigo Duterte told a business conference on the APEC sidelines that he believed Trump was pushing back because America was the first victim of globalization.

China's decision to open its markets to the world under leader Deng Xiaoping attracted U.S. businesses eager to take advantage of the country's low-cost environment.

"And that is why Trump is trying to roll it back and say America First," he said.

Trade and foreign ministers of 11 members of the Trans-Pacific Partnership hope to agree in principle on a way forward without U.S. involvement after Trump pulled out earlier this year.

New Zealand Minister for Trade and Export Growth David Parker said the TPP talks being held at the ministerial level were more likely to progress if few changes are made to the original accord.

"The more the changes, the harder it may be to form a consensus," Parker said. "There is good will. There is a desire to make progress." 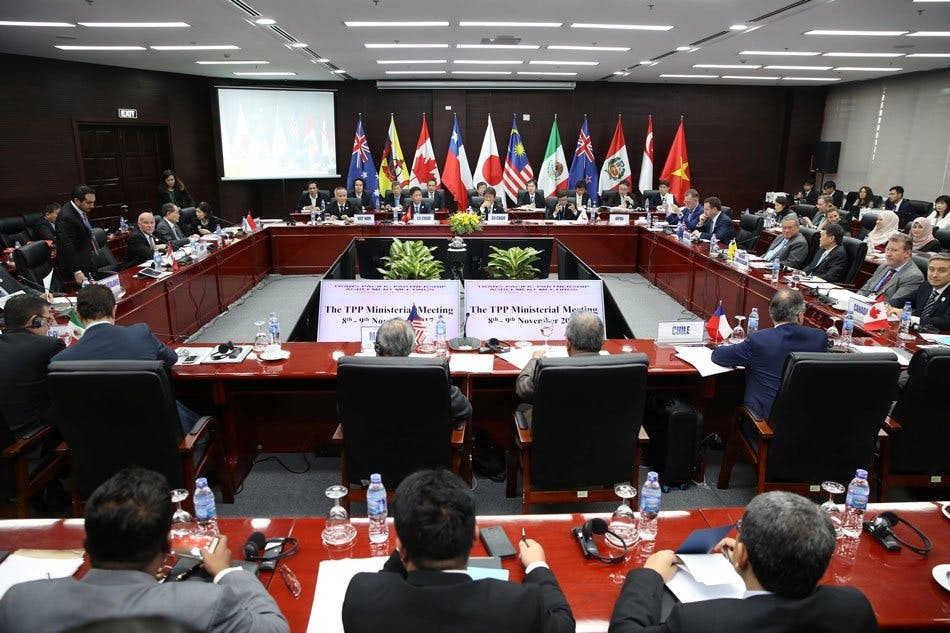 But Parker said it was still uncertain if talks by the TPP leaders themselves would be held as planned.

"We will do our utmost so that we can reach a basic agreement," Abe said.

The U.S. pushback on "free trade," evidenced in Trump's "America First" policy, has raised eyebrows in the region after decades of U.S. pressure on opening markets.

"Over the last year, things have changed a lot," Alan Bollard, executive director of the Singapore-based APEC Secretariat, said in an interview. "The new U.S. administration does have a markedly different view about trade policies and regional economic integration," he said. "We're trying to get more clarity about what they're comfortable with and what the response of other members is."

While APEC operates by consensus and customarily issues nonbinding statements, TPP commitments would eventually be ratified and enforced by its members.

But even talks this week on a declaration to cap this week's APEC summit had to be extended for an extra half-day as ministers haggled over wording. It's unclear what the exact sticking points were, but officials have alluded to differences over the unequal impact more open trade has had on workers and concerns over automation in manufacturing that could leave many millions in a wide array of industries with no work to do.

"There is a new trend of protectionism that reflects new aspects of globalization," Vietnamese trade minister Tran Tuan Anh said.

But Anh said the group eventually managed to bridge their differences.

As a developing country with a fast-growing export sector, Vietnam has a strong interest in open trade and access for its exports to consumers in the West. The summit is an occasion for its leaders to showcase the progress its economy has made thanks largely to foreign investment and trade. Danang, Vietnam's third largest city, is in the midst of a construction boom as dozens of resorts and smaller hotels pop up along its scenic coastline.

But even though its economy grew at a brisk 6.2 percent pace last year, Vietnam's GDP per capita is still one of the lowest among APEC members at less than $2,200. Many of its 95 million people remain poor and vulnerable to natural disasters such as storms that lashed the coast near Danang just days before the APEC meetings.

The Philippines, likewise, is counting on gaining more open access to other APEC economies, Duterte said.

"The rich will become richer and the poor will become poorer unless things change for those who are left behind," he told the business conference.

"APEC will only be relevant if prosperity is shared by all," he said. "Charities is not what less developed economies need. What they need is more market access and the opportunity to participate."

Groundwater — rather than living creatures — formed the organic compounds found in the rock.
Jan 14th, 2022

How is Europe, which imports most of its energy, going to make it through the winter?
Jan 14th, 2022