Silence On Pacific Rim Ministers' Talks Ahead Of APEC Summit

Officials from 21 economies meeting appeared to be struggling for a consensus on open markets and other strategic issues ahead of a regional summit. 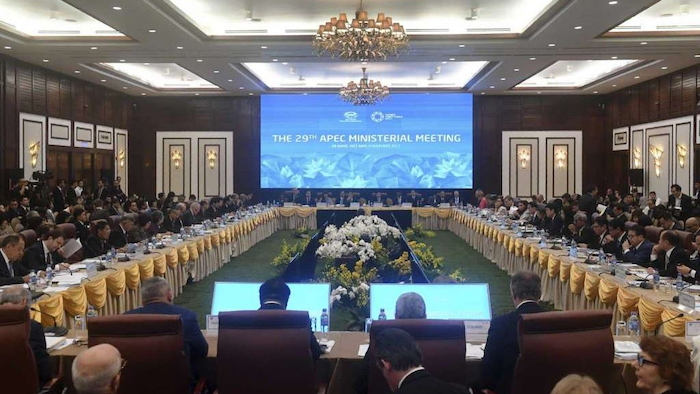 Foreign and trade ministers of 21 Pacific Rim economies meeting in Danang, Vietnam, appeared to be struggling for a consensus on open markets and other strategic issues ahead of a regional summit, as their hosts appealed for cooperation.

A news conference planned for late Wednesday was canceled as the talks dragged on, and APEC officials said they would continue on Thursday. The ministers were due to endorse a draft of a statement their leaders in the Asia-Pacific Economic Cooperation forum usually issue at the end of the annual summit.

The Vietnamese hosts urged those involved to work toward a compromise.

"I hope that we will seize this last opportunity before our leaders' meeting to show flexibility and willingness needed to bridge the remaining gaps so that we can come out with a meaningful package for regional economic integration," said Vietnamese Minister of Industry and Trade Tran Tuan Anh.

"Given the rapid changes and uncertainties that the global economy is now facing, this will convey a strong message that reflects steadfastness and determination of APEC in pursuing a free and open region for trade and investment," Anh said.

It was unclear if the U.S. pushback on "free trade," evidenced in the "America first" policy of the administration of President Donald Trump and his decision to withdraw from a regional trade pact, may have stymied progress toward an agreement.

Trump is to attend the summit, which begins Friday in the Vietnamese coastal resort city.

In opening the ministerial talks on Wednesday, Vietnamese Foreign Affairs Minister Pham Binh Minh told delegates that shifting global and regional conditions come with "intertwining opportunities and challenges," as they began working out details of the leaders' statement.

"Economic recovery is firming but projected growth rates are still below pre-crisis averages," he said. 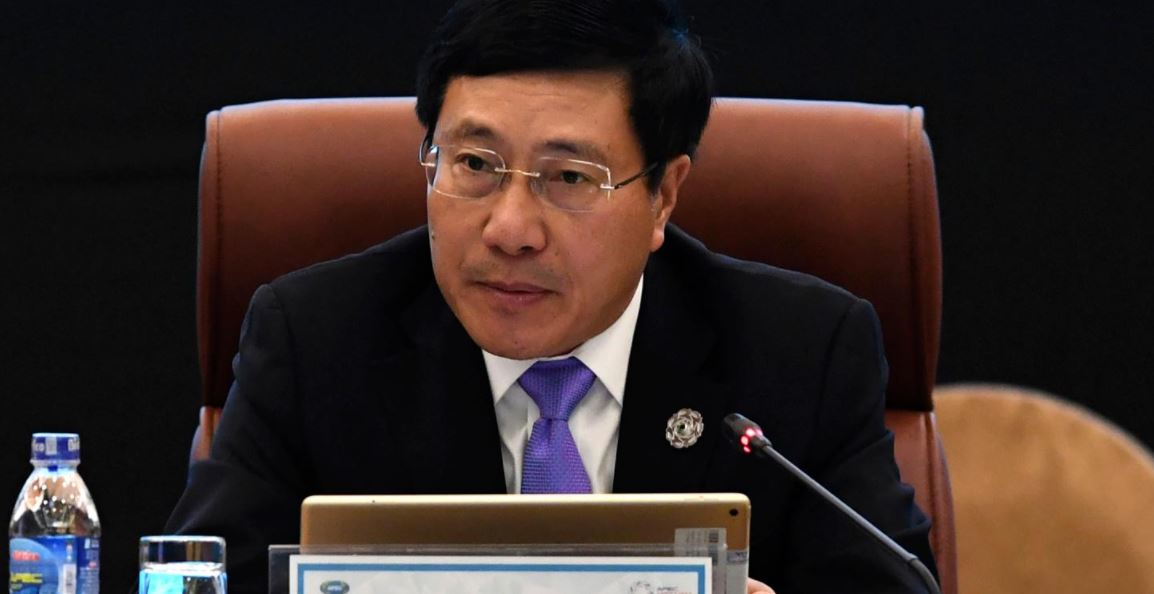 Many in the region worry about how efforts to boost productivity through automation might affect their own lives, he added.

Vietnam, the host of the summit, is using the occasion to showcase the progress its economy has made thanks largely to opening to foreign investment and trade.

Danang, Vietnam's third largest city, is in the midst of a construction boom as dozens of resorts and smaller hotels pop up along its scenic coastline.

The country is a major garment exporter and the largest production base for Samsung Electronics' mobile phones.

But even though its economy grew at a brisk 6.2 percent pace last year, its GDP per capita is still one of the lowest among APEC members at less than $2,200. Many of its 95 million people remain poor and vulnerable to natural disasters such as storms that lashed the coast near Danang just days before the APEC meetings.

On Wednesday, about 1,000 soldiers joined local residents in helping to dig the picturesque nearby city of Hoi An out of the mud and rubble left by flooding from a typhoon. Spouses of the APEC leaders are due to visit the city south of Danang during the summit.

A year after Trump was elected U.S. president on a platform that rejected a Pacific Rim trade pact in favor of country-to-country deals and what he calls "fair" rather than free trade, other APEC members seem united in their support of multilateral efforts to set rules on trade and investment.

"Over the last year, things have changed a lot," said Alan Bollard, executive director of the Singapore-based APEC Secretariat. "The new U.S. administration does have a markedly different view about trade policies and regional economic integration," he said. "We're trying to get more clarity about what they're comfortable with and what the response of other members is."

After the U.S. withdrawal from the Trans-Pacific Partnership trade pact, the 11 remaining members are trying to reach agreement on a new deal enabling them to move forward without U.S. participation. Japanese officials said earlier they hope for a basic "framework" agreement on the sidelines of the two-day APEC summit starting Friday.

Vietnam, a TPP member, is one of the developing economies most likely to benefit from a deal that the administration of former U.S. President Barrack Obama said would set a "gold standard" for trade rules in the 21st century.

"Given the rapid changes and uncertainty the global economy is now facing, this will convey a strong message that reflects steadfastness and determination of APEC in pursuing a free and open region for trade and investment," Anh, the minister of industry and trade, told the meeting earlier.

It's unclear whether APEC, whose decisions require a consensus and are not legally binding, will succeed in reaching agreement on a declaration condemning protectionism. At a meeting in May, trade ministers failed to concur on that issue. Instead, Vietnam issued a chairman's statement that cited the "un-unified but prevailing views of APEC economies."

"We know it's a complex issue, but there's generally a feeling we want more trade and more growth," said Bollard. "Trade grows very fast in the region and that means economies grow very fast."