The Natural Environment Research Council launched an online campaign to allow Internet users to make up names and vote for their favorites. 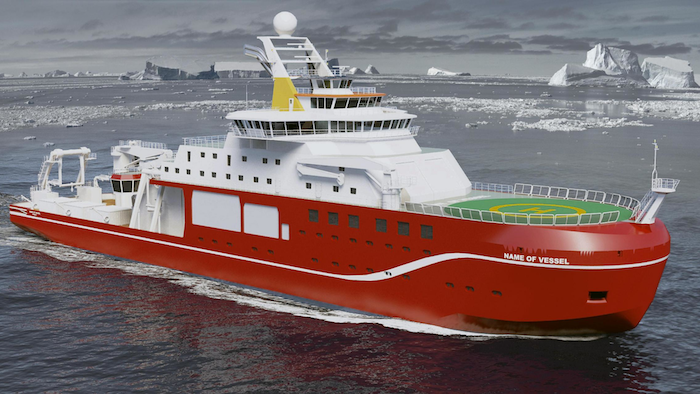 The U.K.-based Natural Environment Research Council is preparing to build its new cutting-edge research vessel to depart on its first polar mission in 2019. But before all that, the advanced ship needs a name. So, on March 17 NERC launched an online campaign to allow Internet users to make up names and vote for their favorites.

But, the online voting has gone a bit awry. In first place is RSS Boaty McBoatface. Distantly following Boaty are more fitting entries, such as RSS Henry Worsley — named after a British explorer who died earlier this year attempting to cross the Antarctic — and RSS David Attenborough — the famed voice behind numerous nature documentaries.

“Can you imagine one of the world’s biggest research labs traveling to the Antarctic with your suggested name emblazoned on the side?” Universities and Science Minister Jo Johnson optimistically asked in a press release announcing the contest. “With the eyes of the world on this ship, this campaign will give everyone across the U.K. the opportunity to feel part of this exciting project and the untold discoveries it will unearth.”

The McBoatface name was suggested by James Hand, ex-BBC Radio Jersey presenter, who told the BBC that he has “apologized profusely.” Julia Maddock, NERC acting associate director of communications, has absolved him, however, tweeting, “No need to be sorry James, we are loving it.”

The yet-unnamed $287 million vessel will be built at Cammell Laird on Merseyside to replace two ships: the RSS Ernest Shackleton and James Clark Ross.

Stretching 129 meters long and weighing 15,000 metric tons, the ship will be equipped with robotic aerial and marine vehicles, space for two helicopters and a reconfigurable laboratory space. With a range of 19,000 nautical miles, the vessel has an endurance of 60 days and can break ice up to 1 meter thick.

According to the The Guardian, other offbeat name suggestions include RSS Its [sic] Bloody Cold Here, What Iceberg and Big Metal Floaty Thingy-Thing — which we should all be glad is not one of the frontrunners.

Due to “overwhelming interest,” NERC’s Name Our Ship website is currently down, but you should be able to access it later today, March 22. The closing date for entries is April 16. As was always part of the deal, the NERC will choose the vessel’s final name.

Do you think the NERC should abide the people’s will and name their new vessel the RSS Boaty McBoatface? Comment below or tweet @KatieeMohr.

Boeing Has First Profitable Quarter Since 2019

Home shipments are continuing at a brisk pace.
Jul 27th, 2021

Managed retreat is an opportunity to preserve the essential while redesigning high-risk areas in ways that are better for everyone.
Jul 26th, 2021

The biggest rocket of all time is planned for launch later this year.
Jul 23rd, 2021

The construction project appeared to have had safety problems for some time.
Jul 22nd, 2021

Profit margins reached into double digits for the third quarter in a row.
Jul 21st, 2021

About 200 Olympians and Paralympians are affiliated with Toyota.
Jul 19th, 2021

The chairman of Dawu Agriculture Group was arrested after trying to stop a state-owned enterprise from demolishing a company building.
Jul 16th, 2021
Follow Us
Most Recent