Until now, U.S. law banning imports of items produced by forced or child labor had gone largely unenforced because of "consumptive demand." 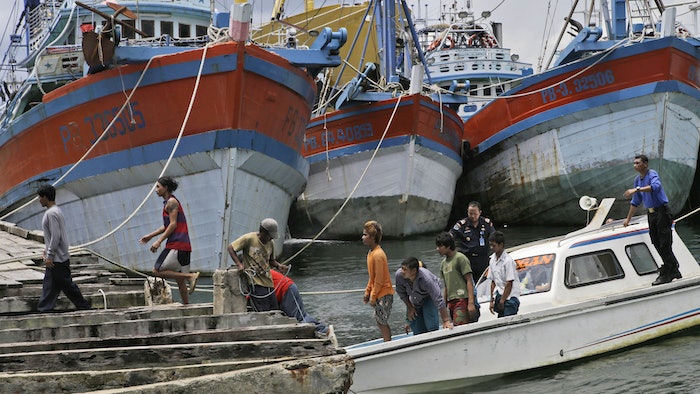 Burmese fishermen arrive at the compound of Pusaka Benjina Resources to report themselves for departure to leave the fishing company in Benjina, Aru Islands, Indonesia as hundreds of foreign fishermen rush at the chance to be rescued from the isolated island on April 3, 2015. (AP Photo/Dita Alangkara, File)

President Barack Obama signed a bill Wednesday that includes a provision banning U.S. imports of fish caught by slaves in Southeast Asia, gold mined by children in Africa and garments sewn by abused women in Bangladesh, closing a loophole in an 85-year-old tariff law that has failed to keep products of forced and child labor out of America.

An expose by The Associated Press last year found Thai companies ship seafood to the U.S. that was caught and processed by trapped and enslaved workers. As a result of the reports, more than 2,000 trapped fishermen have been rescued, more than a dozen alleged traffickers arrested and millions of dollars' worth of seafood and vessels seized.

Until now, U.S. customs law banning imports of items produced by forced or child labor had gone largely unenforced because of two words: "consumptive demand" — if there was not sufficient supply to meet domestic demand, imports were allowed regardless of how they were produced.

Sen. Sherrod Brown, D-Ohio, who offered the amendment eliminating that exception, said Wednesday his office is already asking U.S. Customs and Border Protection to ensure they begin enforcing the new rules when the law takes effect in 15 days.

"It's embarrassing that for 85 years, the United States let products made with forced labor into this country, and closing this loophole gives the U.S. an important tool to fight global slavery," he said.