China Says It Is Building Its Second Aircraft Carrier

The second carrier is being built entirely with domestic technology but has drawn on China's experience refitting its first carrier. 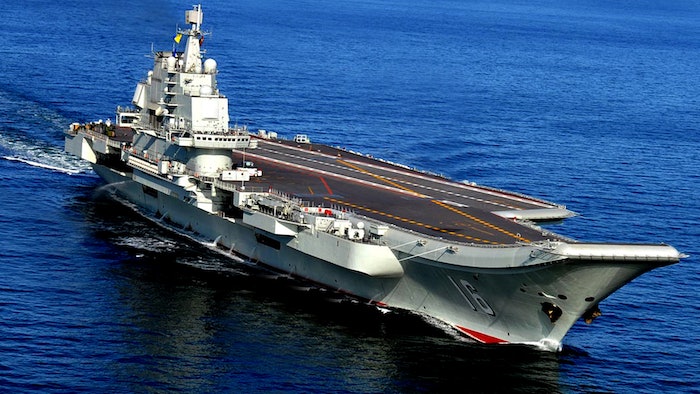 The Liaoning, China's first aircraft carrier, sails in the sea near Qingdao in eastern China's Shandong province. (Chinatopix via AP)

China is building its second aircraft carrier, this time entirely with domestic technology, its Defense Ministry said Thursday, in a leap in its naval development that is increasingly tipping the regional balance of power.

The 50,000-ton vessel is being built in the northern port of Dalian and will be conventionally, rather than nuclear, powered, ministry spokesman Col. Yang Yujun told reporters at a news conference.

The yet-to-be-named vessel will carry J-15 fighter-bombers and other aircraft and use a ski jump mode for launching fixed-wing aircraft, Yang said. The J-15 is a copy of Russia's Sukhoi Su-33.

"After an overall consideration of various factors, the relevant authorities started the research and development of China's second aircraft carrier which is currently under independent design and construction," Yang said.

China currently operates one aircraft carrier that was purchased as an incomplete hull from Ukraine more than a decade ago and then armed and equipped in China before being commissioned in 2013. That carrier, christened the Liaoning after the port in which it was refitted, has yet to take on its full aviation complement and is currently undergoing testing and training.

Yang said the second carrier is being built entirely with domestic technology but has drawn on China's experience refitting its first carrier "with new improvements in various aspects."

Plans for a second aircraft carrier had long been rumored, with many designating Shanghai's Jiangnan Shipyard as the most likely build site. Thursday's announcement was the first official confirmation.

China is also steadily adding cutting-edge frigates, destroyers and nuclear submarines to its fleet and by some estimates has been launching more vessels than any other nation. Its rapid naval modernization is seen as aimed at asserting its maritime claims and extending its power far from its shores. Those ambitions have raised tensions with Japan, the U.S. and Southeast Asian nations with rival territorial claims.

China claims sovereignty over almost all of the South China Sea, which is home to key shipping lanes, rich fishing grounds and a potential wealth of mineral resources. Five other governments claim the maritime space either in part or in whole, and the Philippines and Vietnam in particular have sought assistance from the U.S. and others in beefing up their ability to resist what they view as Chinese aggression, including its construction of seven new islands by piling sand atop coral reefs.

Yang said the date of the second carrier's launching would "depend on progress made at the current stage." As to how many flat-tops China aimed to build in total, he said, "Relevant authorities will take into consideration various factors."

The second carrier will be roughly the same size as the Liaoning but only about half the size of the U.S. Nimitz class nuclear powered super-carriers, of which 10 are currently in operation.