The U.S. government has hit Toyota Motor Corp. with a record $17.4 million fine for failing once again to quickly report problems to federal regulators and for delaying a safety recall. The fine against the world's biggest automaker from the National Highway Traffic Safety Administration, the agency that monitors vehicle safety, is the maximum allowed by law. 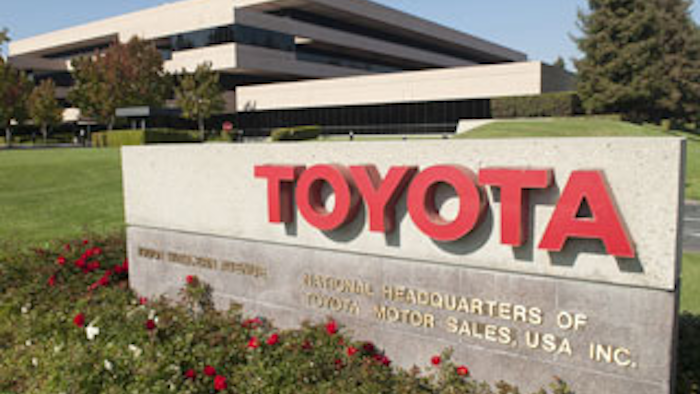 DETROIT (AP) — The U.S. government has hit Toyota Motor Corp. with a record $17.4 million fine for failing once again to quickly report problems to federal regulators and for delaying a safety recall.

The fine against the world's biggest automaker from the National Highway Traffic Safety Administration, the agency that monitors vehicle safety, is the maximum allowed by law. It's the fourth fine levied against Toyota in the past two years for similar infractions, and it's the largest single fine ever assessed against a car company over safety defects. In 2010, Toyota paid a total of $48.8 million in fines for three violations.

The latest infraction raises questions about whether the fines are big enough to deter automakers that withhold information from NHTSA, and whether the government agency can do enough to stop repeat offenses. The fine, announced Tuesday, is a tiny fraction of Toyota's earnings. The company posted a $3.2 billion profit in the third quarter alone.

Toyota said it agreed to pay the penalty without admitting any violation of the law. It also pledged to strengthen data collection and evaluation to make sure it takes action more quickly.

"We agreed to this settlement in order to avoid a time-consuming dispute and to focus fully on our shared commitment with NHTSA to keep drivers safe," Ray Tanguay, the company's chief quality officer, said in a statement. A spokesman at the Toyota's U.S. offices did not answer further questions.

The latest fine stems from a June recall of SUVs from Toyota's Lexus luxury brand. About 154,000 of the 2010 Lexus Rx 350s and RX 450h models were recalled because the driver's-side floor mats can trap the gas pedal and cause the vehicles to speed up without warning. The problem was similar to troubles from 2010 that prompted a series of embarrassing safety recalls by the company.

Toyota has recalled more than 14 million vehicles globally to fix sticky gas pedals and floor mats. The recalls tarnished the company's sterling reputation for reliability and cut into sales. Recently its sales have rebounded as it appeared to put the safety problems in the rear-view mirror.

But NHTSA said Tuesday that Toyota failed to report acceleration problems in the Lexus SUVs within five business days of discovering them, as required by U.S. law. The agency said it began investigating the SUVs early this year after receiving complaints from consumers. In May, the agency contacted Toyota about the problem, and it took the company a month to report 63 incidents of floor mats trapping gas pedals, NHTSA said.

Next year, the maximum fine NHTSA can assess will double to $35 million

Toyota, NHTSA said, agreed in a settlement to make internal changes to comply with U.S. laws.

In an August interview, Jim Lentz, Toyota's highest-ranking U.S. executive, told The Associated Press that the company was obeying the law in giving information to NHTSA.

In 2010, Toyota paid two $16.4 million fines and one $16 million fine, all for reporting violations. NHTSA said at the time that the company didn't report problems with sticking gas pedals in a timely manner, nor did it report problems with floor mats trapping gas pedals. Toyota also told NHTSA that a recall of commercial trucks in Japan for a steering problem did not affect U.S. vehicles. But a year later, the company recalled similar vehicles in the U.S.

He becomes the second senior official to depart in the wake of the one of the worst blackouts in U.S. history.
Mar 4th, 2021

Most Small Businesses Not Mandating Vaccines or Tests

A US Census Bureau survey shows that 70 percent of businesses say they don't require employees to have a negative COVID-19 test before coming to work.
Mar 3rd, 2021

The technique is faster, cheaper and more sensitive than other approaches.
Mar 3rd, 2021

"Exxon has been fighting this case for 11 years now, refusing to take any responsibility for spewing millions of pounds of illegal pollution into Texas communities."
Mar 3rd, 2021

Rohit Chopra said, if confirmed, he would likely return the bureau to aggressively penalizing companies for bad behaviors.
Mar 2nd, 2021

The pilot-scale facility will create and test natural gas foam as a safe and stable alternative to water for hydraulic fracturing.
Mar 2nd, 2021

Is It Time to Control Cigarette-Makers?

A potential solution to tobacco-related deaths is a corporate 'death penalty.'
Mar 2nd, 2021

And it is unlikely to be the last utility to seek shelter in the courts.
Mar 2nd, 2021
Follow Us
Most Recent