Hyundai and Kia overstated the gas mileage on most of their models from the past three years in an embarrassing blunder that could bring sanctions from the U.S. government and millions of dollars in payments to car owners. Because of the inflated mileage, discovered during an audit by the Environmental Protection Agency, the automakers must retrofit the window stickers on the cars, the agency said. 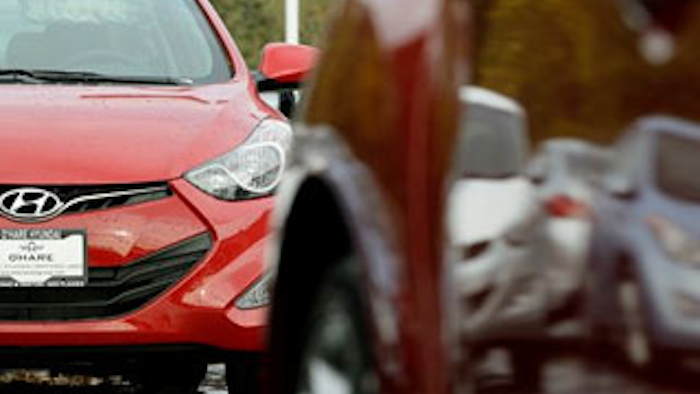 DETROIT (AP) — Hyundai and Kia overstated the gas mileage on most of their models from the past three years in an embarrassing blunder that could bring sanctions from the U.S. government and millions of dollars in payments to car owners.

Because of the inflated mileage, discovered during an audit by the Environmental Protection Agency, the Korean automakers must retrofit the window stickers on the cars, reducing their fuel economy figures by one-to-six miles per gallon depending on the model, the agency said Friday.

"Consumers rely on the window sticker to help make informed choices about the cars they buy," said Gina McCarthy, assistant administrator of the EPA's air-quality office. "EPA's investigation will help protect consumers and ensure a level playing field among automakers."

The EPA said its inquiry into the errors is continuing, and the agency would not comment when asked if the companies will be fined or if a criminal investigation is under way. But the EPA said it's the first case in which erroneous test results were uncovered in a large number of vehicles from the same manufacturer. Only two similar errors have been discovered since 2000, and those involved single models.

Hyundai and Kia executives apologized for the errors, said they were unintentional, and promised to pay the owners of 900,000 cars and SUVs for the difference in mileage. The payments, which will be made annually for as long as people own their cars, are likely to cost the companies hundreds of millions of dollars.

Automakers follow EPA procedures to do their own mileage tests, and the EPA enforces accuracy by auditing about 15 percent of vehicles annually.

The EPA said it began looking at Hyundai and Kia when it received a dozen complaints from consumers that the mileage of their 2012 Hyundai Elantra compact cars fell short of numbers on the window stickers. Staffers at the EPA's vehicle and fuel emission laboratory in Ann Arbor, Mich., included the Elantra in an annual audit that focused on cars that lead their market segments in mileage.

The audit turned up discrepancies between agency test results and data turned in by Hyundai and Kia, the EPA said. As a result, the two automakers will have to knock one or two miles per gallon off the mileage posted on most of the models' window stickers. Some models will lose three or four miles per gallon, and the Kia Soul, a funky-looking boxy small SUV, will lose six mpg from the highway mileage on its stickers.

Hyundai and Kia are owned by the same company and share factories and research, but they sell different vehicles and market them separately. The companies said the mistakes stemmed from procedural differences between their mileage tests and those performed by the EPA.

The changes affect 13 models from the 2011 through 2013 model years, including seven Hyundais and six Kias. Window stickers will have to be changed on some versions of Hyundai's Elantra, Sonata Hybrid, Accent, Azera, Genesis, Tucson, Veloster and Santa Fe models, as well as the Kia Sorrento, Rio, Soul, Sportage and Optima Hybrid.

Michael Sprague, executive vice president of marketing for Kia Motors America, also apologized and said the companies have a program in place to reimburse customers for the difference between the mileage on the window stickers and the numbers from the EPA tests.

The companies will find out how many miles the cars have been driven, find the mileage difference and calculate how much more fuel the customer used based on average regional fuel prices and combined city-highway mileage. Customers also would get a 15 percent premium for the inconvenience, and the payments would be made with debit cards, Sprague said. The owner of a car in Florida with a one mpg difference who drove 15,000 miles would get would get a debit card for $88.03 that can be refreshed every year as long as the person owns the car, Sprague said.

Sung Hwan Cho, president of Hyundai's U.S. technical center in Michigan, said the EPA requires a complex series of tests that are very sensitive and can have variations that are open to interpretation. The companies did the tests as they were making a large number of changes in their cars designed to improve mileage. The changes, such as direct fuel injection into the cylinders around the pistons, further complicated the tests, Cho said.

"This is just a procedural error," he said. "It is not intended whatsoever."

Krafcik said the companies have fixed testing procedures and are replacing window stickers on cars in dealer inventories. Owners can be confident in their mileage stickers now, he said, adding that Hyundai will still be among the industry leaders in gas mileage even with the revised window stickers.

The mileage was overstated on about one-third of the Hyundais and Kias sold during the three model years, he said.