The administration will offer nearly 500,000 acres off the coast of New York and New Jersey. 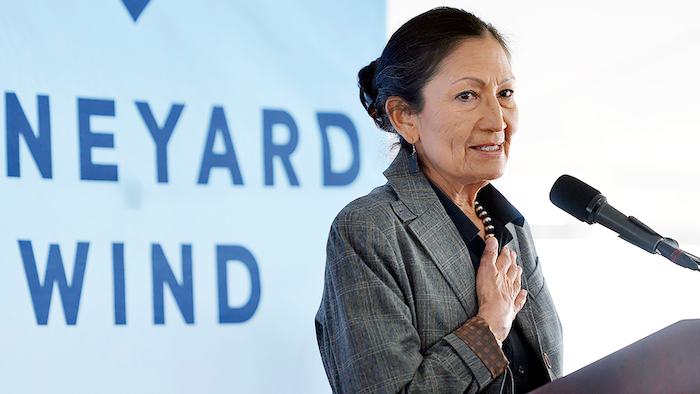 Interior Secretary Deb Haaland said the Feb. 23 auction in the New York Bight region will allow offshore wind developers to bid on six lease areas, the most ever offered in an auction for offshore wind energy projects.

“The Biden-Harris administration has made tackling the climate crisis a centerpiece of our agenda, and offshore wind opportunities like the New York Bight present a once-in-a-generation opportunity to fight climate change and create good-paying, union jobs in the United States,” Haaland said.

The auction comes after the administration announced a flurry of clean energy actions Wednesday, such as steps to speed up reviews of clean energy projects on public lands, including solar, onshore wind and geothermal energy. The Interior Department has approved 18 onshore projects during Biden’s first year in office. The projects are set to deliver more than 4 gigawatts of clean energy, powering more than 1 million homes.

The administration also said it is accelerating the deployment of new transmission lines, as enabled by the new bipartisan infrastructure law, to make the grid more reliable and resilient in the face of intensifying extreme weather. Last year was the deadliest weather yea r for the contiguous United States since 2011, the National Oceanic and Atmospheric Administration said Monday. A total of 688 people died in 20 separate billion-dollar weather and climate disasters that cost a combined $145 billion, the agency said.

Haaland has said the Interior Department hopes to conduct as many as seven offshore wind lease sales by 2025, including the New York Bight and sales offshore in the Carolinas and California later this year.

Democratic Govs. Kathy Hochul of New York and Phil Murphy of New Jersey hailed the New York Bight lease sale, saying it would help their states chart an ambitious path toward a clean energy economy. The projects there could produce up to 7 gigawatts of electricity.

“Offshore wind holds the tremendous promise for our future in terms of climate change, economic growth and job creation,” Murphy added. “New Jersey is already committed to creating nearly one-quarter of the nation’s offshore wind-generation market and these transformative projects are proof that climate action can drive investments in infrastructure and manufacturing while creating good-paying, union jobs.″

The administration’s announcement rankled some commercial fishing groups, who have complained that wind projects off the East Coast could interfere with efforts to catch seafood species such as scallops, clams and sea bass. Annie Hawkins, executive director of Responsible Offshore Development Alliance, a group representing fishing associations and companies, said the Biden administration has been moving offshore wind projects at a “staggering” pace, with insufficient environmental reviews or public comment.

“The NY Bight is a hugely conflicted area,'' Hawkins said, referring to a variety of fishing, shipping and other ocean uses. “Issuing new leases before putting processes in place to mitigate the clear risks this scale of development poses to historic food production and ecological resilience will result in devastating impacts that would have been largely avoidable with careful planning,” she said in an emailed statement.

The Interior Department said it consulted with commercial fisheries and other stakeholders before moving forward with the lease sale, resulting in a 72% reduction in the size of the proposed lease area. The closest distance to New Jersey among the parcels is 27 nautical miles offshore, while the nearest to New York is 20 nautical miles away, the department said.

Amanda Lefton, director of Interior's Bureau of Ocean Energy Management, said her agency will require that the six leases be awarded to six separate developers, ensuring “a robust set of operators” and spurring competition on price and other factors.

The project carries several stipulations, including required project labor agreements with unions and planned incentives for using U.S.-made components such as blades, turbines and foundations.