The complaint alleges that Altria agreed not to compete against Juul in return for the $13 billion stake in the company. 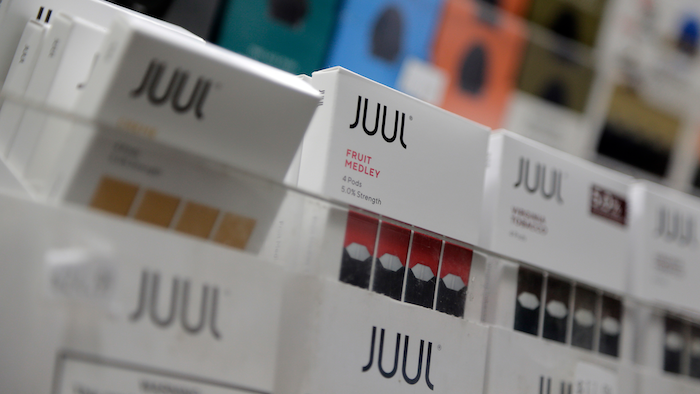 In this Dec. 20, 2018, file photo Juul products are displayed at a smoke shop in New York.
Associated Press

WASHINGTON (AP) — U.S. business regulators are suing to break up the multibillion-dollar deal between tobacco giant Altria and e-cigarette startup Juul Labs, saying their partnership amounted to an agreement not to compete in the U.S. vaping market.

The action announced late Wednesday by the Federal Trade Commission is the latest legal headwind against Altria's investment in the embattled vaping company. Juul sales have been sliding for months amid state and federal investigations, lawsuits and flavor restrictions aimed at curbing the recent explosion in teen vaping.

For years, Altria competed in the burgeoning e-cigarette space. But the Richmond, Virginia-based company was quickly overtaken by San Francisco-based Juul, which became the top U.S. vaping brand on the popularity of its small, high-nicotine and fruity flavored e-cigarettes. The company has since pulled all of its flavors except tobacco and menthol.

In late 2018 Altria discontinued its own e-cigarettes and took a 35% stake in Juul.

The complaint announced by the FTC alleges that Altria agreed not to compete against Juul in return for the $13 billion stake in the company.

“Altria and Juul turned from competitors to collaborators by eliminating competition and sharing in Juul's profits," said Ian Conner, of the FTC's Bureau of Competition. It was not clear from the agency's initial statement whether Altria would be required to sell its stake in Juul. If the case goes to trial it would be heard by an administrative law judge in January 2021, the agency said.

Altria said in a statement that the FTC “misunderstood the facts" of its investment in Juul.

“We are disappointed with the FTC’s decision, believe we have a strong defense and will vigorously defend our investment," said Altria General Counsel Murray Garnick.

Juul did not immediately respond to requests for comment Thursday.

Altria has slashed the value of its investment in Juul to roughly a third of what it initially paid, taking more than $8.5 billion in write-downs since October.