A letter from the likes of Amazon, Nike and Nissan predicted there would be economic backlash. 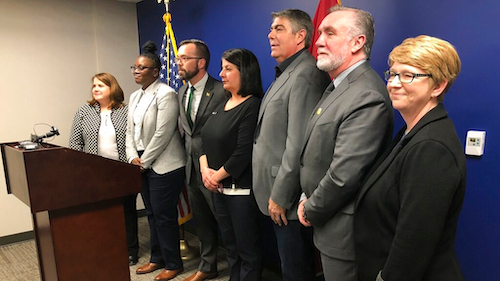 LGBT advocacy group leaders and representatives from businesses gathered at the Cordell Hull legislative building in Nashville on Wednesday, Feb. 5, 2020 for a news conference to oppose a state adoption law and other proposals that target the LGBT community. Almost three dozen big companies and more than 100 small businesses in Tennessee on Wednesday predicted economic backlash from a newly enacted state adoption law and other proposals that target LGBT people, with one company saying plans to add jobs in Nashville are "in doubt" over the legislation.
AP Photo/Jonathan Mattise

NASHVILLE, Tenn. (AP) — Almost three dozen big companies and more than 100 small businesses in Tennessee on Wednesday predicted economic backlash from a newly enacted state adoption law and other proposals that target LGBT people, with one company saying plans to add jobs in Nashville are "in doubt" over the legislation.

The letter from the likes of Amazon, Nike and Nissan to state officials offered the biggest rebuke to date from the business community after GOP Gov. Bill Lee last month signed the adoption bill and made it effective immediately. Representatives from Dell, Warner Music Nashville, Postmates, Nashville Soccer Club spoke at a Nashville news conference announcing the letter.

Donna Drehmann of Postmates said the food delivery company might not go through with plans to add to its base of 650 account managers, support workers and tech employees in Nashville, saying the company is "alarmed by the Lee administration's anti-LGBTQ agenda” and that bills targeting that community are "just plain wrong” and promote “flagrant hatred.”

"We do look at expanding additional technology jobs here in Nashville," said Drehmann, Postmates director of service quality and training. “However, that is in doubt and that is always in question, especially when we have bills like what were introduced this year.”

The new law would assure continued taxpayer funding of faith-based foster care and adoption agencies even if they exclude LGBT families and others based on religious beliefs. Current adoption practices in Tennessee are not expected to change, as some faith-based agencies had already not allowed gay couples to adopt.

Lee, a religiously conservative businessman, argued the law would better protect religious liberty. It was the first proposal he signed into law this year.

The state House passed the bill last year and the Senate passed the adoption bill on the first day of legislative session last month, sending it to Lee for approval.

“We thought we had more time this session,” said Joe Woolley, CEO of the Nashville LGBT Chamber. “I am surprised and upset that that is the first bill that the Tennessee Senate took up this legislative session, especially when you look at the issues that this state is facing.”

Email records show a private outside legal opinion was forwarded to the governor's senior staff by a member of the Southern Baptist Convention's public policy arm. The opinion was written by a group of attorneys with expertise on religious liberty laws, and said “religious providers need not violate their conscience” as long as other child-placing agencies and the state keep providing readily available alternatives.

The law kicks in at a time when Tennessee continues to grow, with booming Nashville setting the pace. The Nashville Convention and Visitors Corporation hasn't lost any business yet due to the adoption law, but has "fielded many, many calls" about meetings and conventions that have shortlisted or are considering Nashville, said corporation senior vice president for public affairs Andrea Arnold.

The NHL's Nashville Predators warned that “passing discriminatory legislation would limit revenue for the city of Nashville and the state of Tennessee by inhibiting our ability to secure events like those and future events such as league marquee events, NCAA games, award shows and countless potential concerts.”

Tennessee has previously lost business after passing a law criticized as discriminatory against LGBT people. The American Counseling Association canceled its planned Nashville convention after a Tennessee law was enacted in 2016 letting therapists decline to see patients based on religious values and personal principles.