The suit is related to a National Enquirer story that revealed Bezos was having an affair. 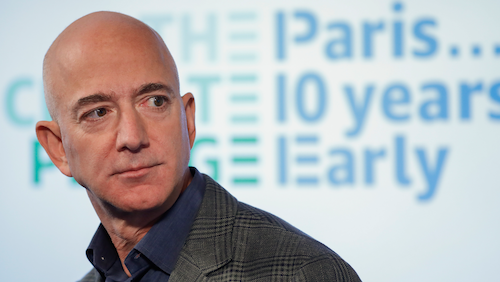 In this Sept. 19, 2019 file photo, Amazon CEO Jeff Bezos speaks during his news conference at the National Press Club in Washington.
Associated Press

NEW YORK (AP) — Amazon founder Jeff Bezos is asking a California court to dismiss a defamation lawsuit filed against him by his girlfriend's brother, Michael Sanchez.

In court documents filed Monday, Bezos and de Becker argue that the activities Sanchez is accusing them of are protected by a law that restricts litigation seeking to limit people's free speech rights under the First Amendment.

A lawyer for Sanchez did not immediately respond to a request for comment.

Last year, The National Enquirer published a story revealing that Bezos was having an affair with Sanchez's sister, Lauren. Michael Sanchez said in his lawsuit that he entered a deal with the tabloid corroborating the affair, but that he did not have or provide nude photos of Bezos to the Enquirer.

After the story came out, Bezos published a blog post alleging that the tabloid tried to blackmail him with embarrassing photos that he sent to Lauren Sanchez. He also suggested that the Enquirer had ties with Saudi Arabia, which was upset with coverage in The Washington Post, a newspaper that Bezos owns. The Post had been harshly critical of the Saudi government after the killing of columnist and Saudi critic Jamal Khashoggi.

Last month, two human rights experts at the United Nations said that Bezos's iPhone was likely hacked through a file sent from an account used by Saudi Crown Prince Mohammed bin Salman. But the U.N. experts did not tie the hack to the Enquirer. The experts called for an "immediate investigation" by the United States.

Bezos and de Becker said in the court documents filed Monday that Michael Sanchez's lawsuit is a way to “put himself back on the front pages and extract money” from them.

Bezos, whose stake in Amazon is worth nearly $120 billion, is the world's richest person.