It makes it easier for engineers to conceptualize new ideas. 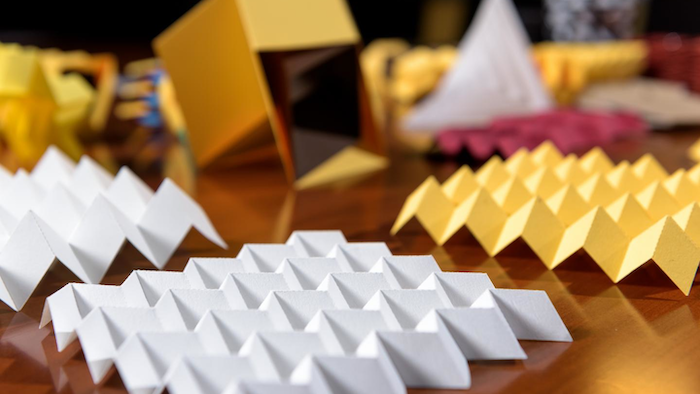 Researchers at Georgia Institute of Technology have developed a new computer-aided approach that streamlines the design process for origami-based structures, making it easier for engineers and scientists to conceptualize new ideas graphically while simultaneously generating the underlying mathematical data needed to build the structure in the real world.

Origami paper folding techniques in recent years have been at center of research efforts focused on finding practical engineering applications for the ancient art, with ideas ranging from deployable antennas to robotic arms.

"Our work provides a means to predict computationally the real origami behavior of a design - something that up to now has not been easily done," said Glaucio Paulino, a professor in the Georgia Tech School of Civil and Environmental Engineering. "With the new software, we can easily visualize and, most importantly, engineer the behavior of deployable, self-assembling, and adaptable origami systems."

The research, which was supported by the National Science Foundation and reported October 11th in the journal Proceedings of the Royal Society A, involved building a computer model to simulate the interaction between the two facets of a folded sheet, including how easily and how far the folds would bend and how much the flat planes would deform during movement.

Once all sections were connected together and digitally represented a piece of origami, the model could simulate how the structure would behave based on what type of material - from soft paper to hard plastic or metal - would be used to create the object.

"This type of modeling was possible already using finite element analysis, but that is a time-consuming process that could take hours or days and provides a lot of unnecessary data," said Ke Liu, a Georgia Tech graduate student who worked on the project. "Our new process is much faster and gives us the underlying data for how the origami works."

The software, which is called MERLIN, allows the researchers to simulate how origami structures will respond to compression forces from different angles - one at a time or several simultaneously. The researchers can then quickly adjust the parameters for the type of material used or from what angle it is compressed to see how that would change the behavior of the piece.

For one of their simulations, the researchers recreated a foldable wine bottle gift bag that uses a cylindrical shell origami called the Kresling pattern. When the top of the structure is compressed to a threshold point, sections of the bag collapse in on themselves in multiple stages.

"The software also allows us to see where the energy is stored in the structure and better understand and predict how the objects will bend, twist and snap," Paulino said.

Paulino and his team recently designed an origami structure capable of being reconfigured to fold into different shapes. The goal was to lay the groundwork for structures that could eventually reconfigure themselves, such as an antenna that could change its shape and operate at different frequencies.

"With this new design approach, we're able to get insight with every iteration of the design, which will guide our design choices and ultimately give us more power to fine-tune these structures," Paulino said.

The software will be provided free for other researchers to use and will be used as an educational tool for undergraduate students at Georgia Tech.