The reality of NAFTA is complicated, especially at the border where communities are enmeshed in a shared economy that can be affected by actions or words in either country. 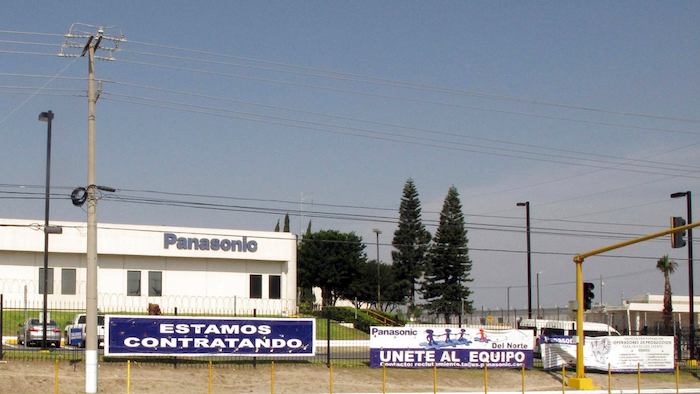 This April 28, 2017 photo shows a sign that says "We're hiring" outside a Panasonic "maquiladora" in an industrial park in Reynosa, Mexico, across the border from McAllen, Texas. A long-time factory worker said he worried that if maquila jobs decrease, the unemployed would fill the ranks of a drug cartels that control Mexican border towns.
AP Photo/Christopher Sherman

REYNOSA, Mexico (AP) — Waving arms and brandishing a long electric prod, the ranch hands and truck drivers herd about 400 leggy calves onto trucks as the sun crests on the outskirts of this border city. After spending their first eight months on the ranches of Gildardo Lopez Hinojosa, the calves are about to cross the border — bound for Texas and U.S. feed lots beyond.

On one of the three bridges connecting Reynosa with Texas, they might cross paths with the beef and chicken shipments that Lopez imports from the U.S. for his local chains of butcher shops and fried chicken restaurants. He gets the best price for his calves in the U.S. and it's cheaper for him to import U.S. chicken than ship Mexican chicken from the country's interior.

Lopez has been selling calves and buying beef across the border for about as long as the North American Free Trade Agreement has been in effect. President Donald Trump has said the agreement that is the basis for much of the $500 billion annual trade between the U.S. and Mexico needs to be renegotiated or scrapped entirely. To hear him tell it, NAFTA was "a catastrophic trade deal for the United States."

The reality is far more complicated, especially at the border where communities are enmeshed in a shared economy that can be affected by actions or words in either country.

"It's a lie to say that NAFTA didn't work," said Rafael Garduno Rivera, an economist at the Center for Economic Research and Teaching in Aguascalientes, who studies the agreement's impacts. "It worked and worked very well and for both sides in various areas. Like everything there were losers and winners."

Maquiladoras, as Mexican assembly plants are known, get most of the attention. They churn out everything from flat-screen televisions and washing machines to auto components that might cross borders a dozen times before a car comes off the assembly line in Michigan.

But U.S. border retailers — downtown discount stores and high-end outlet shopping and malls — also depend on Mexican shoppers, especially those whose jobs in Mexican border cities allow them to shop in the U.S.

For nearly 25 years, Lopez has been sending cows to the U.S. and importing beef to Mexico. Three days a week he loads four to six trailers with his young cows and sends them across the bridge connecting to Pharr, Texas. Once cleared by USDA veterinarians there, buyers from elsewhere in Texas, Arizona or even up toward the Canadian border pick up their cows. After that initial sale, Lopez does not know where they go.

In theory, some could come back to him mixed in among the 25 tons of beef he imports from the U.S. every week for his butcher shops. He buys from the big beef processors like IBP, National Beef and Supreme Beef, wherever he finds the best price.

Lopez's calves create jobs in U.S. feed lots and slaughterhouses and the cheaper U.S. chicken he buys allows him to employ more Mexicans in his restaurants. Among his various businesses he employs about 400 people.

Nearly 5 million U.S. jobs depend on trade between the two countries, according to a study released last fall by the non-partisan Washington, D.C.-based Wilson Center Mexico Institute.

Monica Weisberg-Stewart, across the border in McAllen, Texas, knows that as well as anyone.

Her family ran discount stores on the border for more than 60 years, before making the business decision a couple years ago to close. Now Weisberg-Stewart leases their properties to other businesses.

The border economy is so interconnected that moves in either country can have dire consequences. As an example, she recalled when the U.S. began requiring a new, more expensive visa for Mexicans who crossed to U.S. border cities.

"It wiped out a socio-economic group that would come over here on a daily basis for groceries, milk, products, just their daily goods," she said. "Mexico not coming, Mexico not shopping, affects us."

Border residents on both sides say that is already happening. A weaker Mexican peso has been a principal factor, but the unwelcoming rhetoric and fear of the sort of reception they will receive has been another.

"It's all second hand because people can't buy new," Gonzalez said. "It's OK for us, because from that we eat."

But she was anxious because her supplier had cut back her buying trips recently. She said Mexican customs officials suddenly began hassling the buyer about her purchases, something Gonzalez attributed to the generally deteriorating relations between the two countries.

Gonzalez has a visa that allows her to cross, but the last time she felt U.S. immigration agents were interrogating her more than usual. For now she has stopped crossing out of fear they might take her visa.

Just west of El Paso, Marisela Sandoval, 39, of Sunland Park, New Mexico, said she had seen fewer border crossers like Gonzalez at her job at a Wal-Mart.

Sandoval said Mexican shoppers were fewer and consequently sales this year in the store where she works had been way off.

"Because of the dollar and the feelings about Trump, what he was saying," Sandoval explained. "People were getting afraid because in the bridge they were making them sign a paper that would say that they would take their visa and they were afraid to even come."

Lozoya, 24, has spent four years working in maquiladoras in Nuevo Laredo, a major trade thoroughfare to the United States.

He now works as an engineer supporting assembly lines producing gas valves, thermostats and other products so they keep running, but he's ambitious and hopes to advance.

At night he studies English, because it would help him move up the ladder at so many foreign-owned maquiladoras, including the Illinois-headquartered engineering and manufacturing firm Robertshaw, where he works now.

He used to cross to Laredo to buy school supplies that he couldn't find. But the strong dollar put such purchases out of reach. Many maquila workers making only $50 to $60 for a six-day work week rely on a few hours of daily overtime to make ends meet, he said.

If something happened to the maquila jobs, Lozoya said he worries the unemployed would fill the ranks of the drug cartel that controls Nuevo Laredo. But nothing is clear at the moment, he said. "So far we don't know what situation we're in and what this new president (Trump) is going to say that could affect us."