The European Central Bank said Thursday it is staying on course to wrap up its 2.5 trillion euro ($2.85 trillion) stimulus program at the end of the year, even as risks from trade protectionism, Italian populist policies, and Brexit loom ever larger. 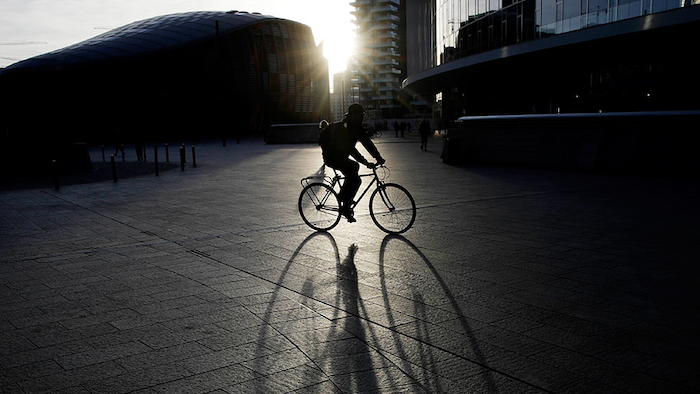 FRANKFURT, Germany (AP) — The European Central Bank said Thursday it is staying on course to wrap up its 2.5 trillion euro ($2.85 trillion) stimulus program at the end of the year, even as risks from trade protectionism, Italian populist policies, and Brexit loom ever larger.

The central bank for to the 19 countries that use the euro left its key interest rates and its path to stimulus exit unchanged at its meeting at its skyscraper headquarters in Frankfurt, Germany.

It reiterated in a statement that the bond-buying stimulus program that began in March 2015 — and was scaled back this month to 15 billion euros a month — will finally end in December even as clouds gather over the economy.

At his news conference, bank head Mario Draghi is expected to assess a range of risks: from Britain possibly leaving the European Union without a negotiated exit deal in March 2019, to increasing trade protectionism and Italy's dispute with EU authorities over its spending plans.

Those risks have grown, but for now they remain risks — things that could damage the economy but haven't actually happened yet, or not to such a degree that it would force the central bank to abandon its plans and find ways to prolong or increase its support for the economy.

A no-deal exit for Britain could hurt trade with the country's largest business partner, the EU, and disrupt the movement of goods and parts for businesses. Italy's public spending plans could trigger a re-emergence of the eurozone's debt crisis — if bond investors start thinking the country is too risky. A trade war between the U.S. and China could hurt global trade, dealing collateral damage to export-dependent Europe.

By bringing the bond purchases to an end, the ECB is following the same path as the U.S. Federal Reserve in withdrawing stimulus deployed to overcome the persistent effects of the global financial crisis and Great Recession a decade ago. The Fed is farther along, raising its key interest rates and letting the bonds that it bought as part of its own stimulus program expire.

Yet just as it seemed the coast was clear, with the European economy growing and unemployment falling, the new risks have appeared and growth has slowed, to a quarterly rate of 0.4 percent in the second quarter, from 0.7 percent at the end of last year.

And while headline inflation has hit 2.1 percent, the underlying rate that excludes volatile items like fuel and food remains much lower at 0.9 percent. The ECB says it is confident the headline inflation rate will remain sustainably near its goal of just under 2 percent.

The ECB has made clear it doesn't intend to back off on the basis of a few bits of data. The written account of its last meeting on Sept. 13 indicated members of its monetary policy committee felt that "in an environment still subject to a number of uncertainties, the current configuration of the monetary policy stance was robust to small changes in the outlook. "

One reason for staying the course: the bank is continuing other means of support even after the bond purchases end, meaning monetary policy remains loose and interest rates low. It has said it will keep buying new bonds as the old ones it has bought are paid off, maintaining the equivalent level of stimulus by keeping borrowing rates down.

Meanwhile, it has made clear it will keep its key interest rates at current ultra-low levels until "at least through the summer of 2019." Right now, the central bank's benchmark for lending to banks that need ready cash is zero and the rate for deposits it takes from banks that have excess money is minus 0.4 percent. That negative rate aims to pushing banks to lend the money, not let it pile up.