China promised Tuesday not to weaken its currency to boost exports during a tariff fight with Washington and rejected U.S. concern about the yuan's sagging exchange rate as groundless and irresponsible. 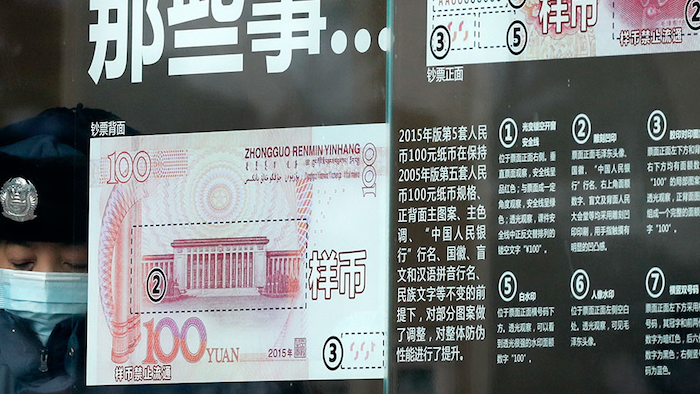 BEIJING (AP) — China promised Tuesday not to weaken its currency to boost exports during a tariff fight with Washington and rejected U.S. concern about the yuan's sagging exchange rate as groundless and irresponsible.

A U.S. official told reporters in Washington the Trump administration is concerned about the weakening yuan. The official spoke on condition of anonymity ahead of Treasury Secretary Steven Mnuchin's trip to Indonesia for meetings of the International Monetary Fund and World Bank.

The tightly controlled yuan has lost almost 10 percent of its value against the dollar this year. That prompted suggestions Beijing might weaken the currency to help exporters that face punitive U.S. tariffs of up to 25 percent.

However, the decline also threatens to damage the Chinese economy by encouraging capital to flow out of the world's second-largest economy, increasing borrowing costs at a time when communist leaders are trying to shore up cooling growth. The central bank intervened in August and tightened controls to discourage speculative trading.

Weaker Chinese economic growth "is likely to further weigh on" the exchange rate, Luc Luyet of Pictet Wealth Management said in a report.

The U.S. official's comments were "groundless speculation and irresponsible," said Lu at a regular news briefing.

Washington and Beijing have imposed punitive tariffs of up to 25 percent on billions of dollars of each other's goods in an escalating fight over U.S. complaints China steals or pressures companies to hand over technology.

Analysts say the yuan's decline has been driven mostly by China's slowing economic growth and the divergence between U.S. and Chinese interest rates.

The margin of decline has been unusually wide because other currencies in the basket used by the Chinese central bank to set exchange rates have not risen along with the greenback.

The central bank is trying to make the yuan more market-oriented and flexible but has intervened when the currency threatened to slide too far.

Its August controls require traders to post deposits for contracts to buy or sell yuan. That allows trading to continue but raises the cost in hopes of deterring speculators.

Beijing imposed similar controls in October 2015 after a change in the exchange rate mechanism prompted markets to bet the yuan would fall. The currency temporarily steadied but fell the following year.

The central bank is likely to prevent the yuan from crossing the "psychological threshold" of seven to the dollar, Luyet said. That would represent a decline of another 1 percent from Monday's level.

"One should not underestimate the central bank's resolve," he said.

The Wargaming and Advanced Research Simulation Laboratory will be used for space technology R&D.
Sep 8th, 2021

The complex would be used to launch small satellites into space.
Sep 7th, 2021

The company said an “anomaly" occurred during the first-stage ascent.
Sep 3rd, 2021
Follow Us
Most Recent