Scotland's leader said Sunday that her nationalist party will support a new referendum on Britain's divorce from the European Union if Parliament gets a vote on it. 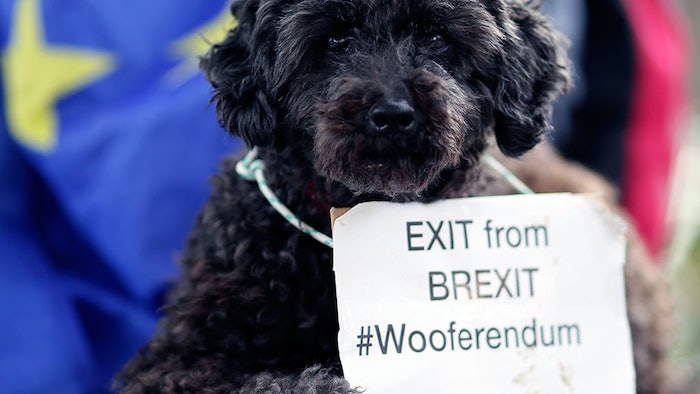 LONDON (AP) — Scotland's leader said Sunday that her nationalist party will support a new referendum on Britain's divorce from the European Union if Parliament gets a vote on it.

Sturgeon told the BBC the party's lawmakers in London "would undoubtedly vote for that proposition."

With the U.K's Conservative government divided over future economic ties with the EU and Britain's departure looming on March 29, calls are growing for a new referendum on whether to accept a divorce deal or remain in the bloc.

Hundreds of pro-EU demonstrators and their dogs marched through London to Parliament on Sunday in a "wooferendum" protest demanding a new Brexit vote.

"People love their animals, and there are serious animal welfare concerns with Brexit," Campbell said. "But the reason I wanted to come is that I do think the people's vote has got to happen."

"The Brexit that is now on offer is so far removed from anything that was promised," he said. "And far from it being undemocratic to have a second vote, I think it's undemocratic not to."