Canadian Prime Minister Justin Trudeau said Wednesday he can't imagine President Donald Trump will make good on his threat to impose new tariffs on Canadian autos entering the United States because it would amount to a self-inflicted wound on the U.S. economy. 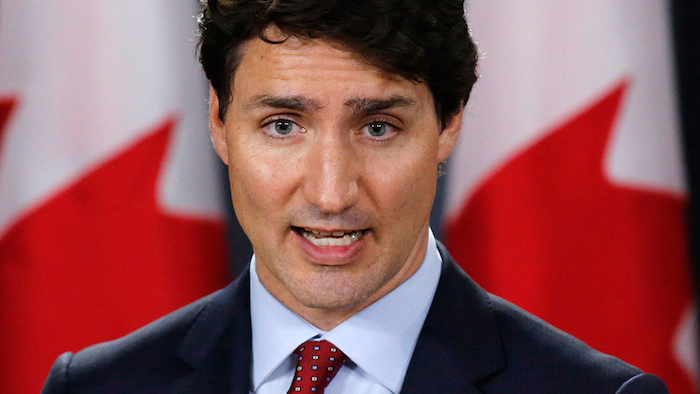 OTTAWA, Ontario (AP) — Canadian Prime Minister Justin Trudeau said Wednesday he can't imagine President Donald Trump will make good on his threat to impose new tariffs on Canadian autos entering the United States because it would amount to a self-inflicted wound on the U.S. economy.

Trudeau was forced to confront that possibility at his end-of-Parliament session news conference because the U.S. Commerce Department is investigating whether to put a 25 percent tariff on cars and light trucks entering the U.S. Trump is considering using the same controversial national security clause that he used last month to impose tariffs on steel and aluminum imports from Canada and other major American allies.

Trump may pride himself on his unpredictability, Trudeau said, but that can't possibly include doing damage to American workers and its auto industry, which is so enmeshed with Canada's.

"I have to continue to believe that leaders will function in the interests of their own country," Trudeau said.

"I have a hard time accepting that any leader might do the kind of damage to his own auto industry that would happen if he were to bring in such a tariff on Canadian auto manufacturers, given the integration of the parts supply chains or the auto supply chains through the Canada-U.S. border."

Trudeau said he has no interest in addressing recent personal attacks by Trump and his top economic advisers. Trump called Trudeau weak and dishonest in tweets, and one Trump adviser said there would be a "special place in hell" for Trudeau. Trump was furious after Trudeau said at the end of a contentious economic summit in Quebec that he wouldn't let Canada be pushed around in trade relations with the United States.

"I'm not going to react to personal comments," Trudeau said.

Trudeau said his government will stay focused on continuing to advance the argument that current and future tariffs are bad for the work forces in both countries.

U.S. Commerce Secretary Wilbur Ross said that he doesn't see Canadian steel as a national security threat to the U.S. and that a revitalized North American Free Trade Agreement could make his government's tariffs on steel and aluminum go away.