China's Premier Appeals To U.S. To 'Act Rationally' Over Trade

Chinese Premier Li Keqiang appealed to Washington on Tuesday to "act rationally" and avoid disrupting trade over steel, technology and other disputes. He promised Beijing will "open even wider" to imports and investment. 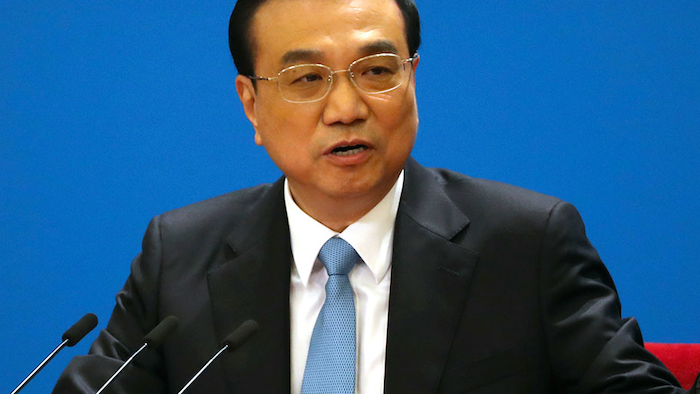 BEIJING (AP) — Chinese Premier Li Keqiang appealed to Washington on Tuesday to "act rationally" and avoid disrupting trade over steel, technology and other disputes. He promised Beijing will "open even wider" to imports and investment.

"No one will emerge a winner from a trade war," said Li, the No. 2 Chinese leader, at an annual news conference held during the meeting of China's ceremonial legislature.

Li made no mention of a possible Chinese response if U.S. President Donald Trump raises import barriers over trade complaints against Beijing. But other officials say President Xi Jinping's government is ready to act.

Trump is expected to announce tariff hikes as early as this week on billions of dollars of Chinese goods from clothing to electronics, despite warnings by U.S. business groups that might hurt American companies and consumers. That has prompted fears Beijing might retaliate by cutting Chinese purchases of American jetliners, soybeans and other goods.

"What we hope is for us to act rationally rather than being led by emotions," said Li. "We don't want to see a trade war."

Asked whether Beijing might use its large holdings of U.S. government debt as leverage, the premier said its investments are based on market principles and "China will remain a responsible long-term investor."

China and the United States have one of the biggest global trading relationships but the flow is lopsided. Americans buy Chinese goods worth $3 for every $1 of goods they sell to China.

Beijing reported a trade surplus of $275.8 billion with the United States last year, or two-thirds of its global total. Washington reports different figures that put the gap at a record $375.2 billion.

Li promised more market-opening and other reforms as Xi's government tries to make its cooling, state-dominated economy more productive. He said Beijing will make it easier to start a business and will open more industries to foreign and private competition.

The ruling Communist Party promised in 2013 to give a bigger role to market forces and entrepreneurs who generate most of China's new jobs and wealth.

Reform advocates complain they are moving too slowly, but hope Xi, who took power in 2012, might accelerate changes after focusing during his first five-year term as party leader on cementing his status as China's most dominant figure since at least the 1980s.

"If there is one thing that will be different from the past, that will be that China will open even wider," said Li.

Li repeated a promise he made March 5 at the opening of the legislature to "fully open the manufacturing sector" to foreign competitors.

"There will be no mandatory requirement for technology transfers and intellectual property rights will be better protected," the premier said.

The government has yet to say how that might change conditions for automakers and other manufacturers. Under current rules, those that want to operate in China are required to work through local partners, which requires them to give technology to potential competitors.

In a sign of Li's reduced status as Xi amasses power, the premier was flanked by four new vice premiers and four other economic officials, in contrast to previous years when he appeared alone at the annual news conference.

They included Liu He, a Harvard-trained Xi adviser who was named a vice premier Monday and has told foreign businesspeople he will oversee economic reform. Neither Liu nor any of the other officials spoke at the event.

The premier traditionally is China's top economic official but Xi has stripped Li of his most prominent duties by appointing himself to lead ruling party bodies that oversee economic reform and finance policy.

US Senators Steve Daines and Debbie Stabenow, along with Representatives Dan Newhouse and Kathleen Rice were honored for their support of policies aiding the beer industry.
Sep 23rd, 2020

The ability, or inability, of these companies to identify the best of both worlds and fuse them together could have bigger-picture impacts.
Sep 23rd, 2020

The airline's CEO says it was the fastest selling flight in the company’s history.
Sep 23rd, 2020

A Coast Guard analysis found no fault with the design of the South Korean-owned Golden Ray.
Sep 23rd, 2020

The space telescope snapped the picture last month when the planet was 406 million miles away.
Sep 18th, 2020
Follow Us
Most Recent