The European Union on Monday urged U.S. President Donald Trump not to head down "a dead end" road of protectionism. 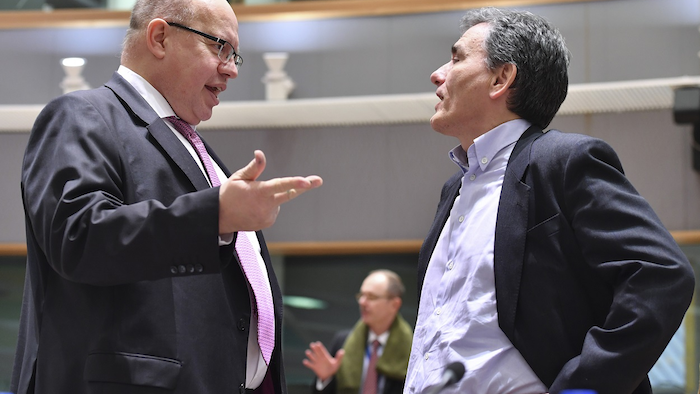 The European Union on Monday urged U.S. President Donald Trump not to head down "a dead end" road of protectionism and warned of a damaging trade war over his new steel and aluminum tariffs.

At talks in Brussels, economy ministers underlined that the EU — the world's biggest trading bloc — supports free and open trade but that its 28 countries will respond if they are targeted by the U.S. tariffs, which are set to enter force next week.

"We are worried (about) the possibility of having a trade war between the United States and the EU because we believe that there will be only losers. We believe that protectionism is a dead end," French Economy Minister Bruno Le Maire told reporters.

Trump said last Thursday that he was slapping tariffs of 25 percent on imported steel and 10 percent on aluminum. He temporarily exempted big steel producers Canada and Mexico — provided they agree to renegotiate a North American trade deal to his satisfaction.

He said other countries could be spared the tariffs if they can convince the U.S. government that their steel and aluminum exports don't threaten American industry.

The EU rejects Trump's argument that the tariffs are required for national security reasons. It has threatened to slap retaliatory duties on around 2.8 billion euros ($3.4 billion) worth of U.S. steel, agricultural and other products like peanut butter and orange juice if it is not excluded from the tariff regime.

Amid uncertainty over who might be exempted, German Finance Minister Peter Altmaier appealed to reason, saying it is the "responsibility of everybody to keep international trade as fair and open as possible."

Dutch Finance Minister Wopke Hoekstra said the tariffs are "a bad idea. It is bad for European citizens, for Dutch citizens and it will turn out bad for U.S. citizens as well."

The EU's executive body, the European Commission, handles trade talks on behalf of member countries. Trade Commissioner Cecilia Malmstroem held talks on Saturday with U.S. Trade Representative Robert Lighthizer in an effort to understand Trump's exemptions, but she said she got "no immediate clarity on the exact U.S. procedure."

Malmstroem said she told Lighthizer that "the European Union must be excluded" from tariffs because it is a close U.S. ally. Indeed, most EU countries are in NATO, the world's biggest security alliance, together with the U.S.

Phone conversations are continuing, but no new meeting was planned as of Monday.

Trump tweeted Monday that U.S. "Secretary of Commerce Wilbur Ross will be speaking with representatives of the European Union about eliminating the large Tariffs and Barriers they use against the U.S.A." It was not clear when or where the meeting would take place.

The Commission refuses to negotiate over the issue, believing that Trump's tariffs are an attack on global trade rules and principles. Brussels insists that the real problem is a glut of steel on international markets. Experts largely blame overproduction by China for that.