The North American Free Trade Agreement is in its 23rd year. But there are growing doubts that it will survive through its 24th. 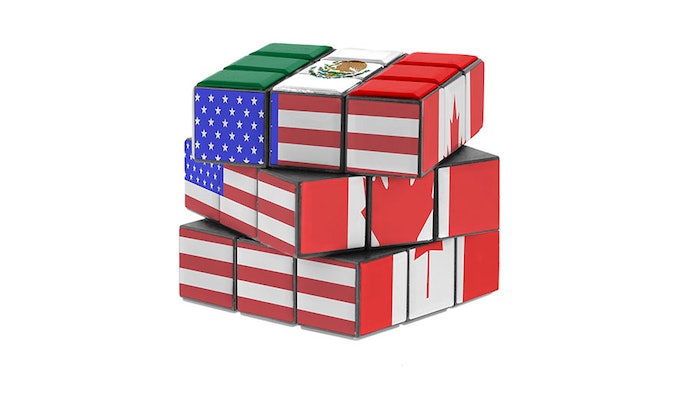 WASHINGTON (AP) — The North American Free Trade Agreement is in its 23rd year. But there are growing doubts that it will survive through its 24th.

President Donald Trump has threatened to withdraw from the agreement if he can't get what he wants in a renegotiation. But what he wants — from requiring that more auto production be made-in-America to shifting more government contracts to U.S. companies — will likely be unacceptable to America's two NAFTA partners, Mexico and Canada.

Round 4 of NAFTA talks began Wednesday in Arlington, Virginia. In a sign of how contentious things could get, the countries extended the negotiations for two extra days, through Tuesday.

"What is the administration going to do? Are they going to be patient and work through these things?" asks Phil Levy, senior fellow at the Chicago Council on Global Affairs. "Or are they going to take this as a pretext and say, 'We tried negotiations; they failed. Now we need to blow this up?' "

Blowing up the deal appears to be Trump's favored choice. On the campaign trail, he called NAFTA a job-killing disaster. And in an interview with Forbes magazine published Tuesday, Trump said: "I happen to think that NAFTA will have to be terminated if we're going to make it good. Otherwise, I believe you can't negotiate a good deal."

Levy pegs the chance of NAFTA's survival at less than 50 percent.

The end of NAFTA would send economic tremors across the continent. American farmers depend on Mexico's market. Manufacturers have built complicated supply chains that cross NAFTA borders. Consumers have benefited from lower costs.

NAFTA erased most trade barriers along the United States, Canada and Mexico and led to an explosion in trade between the three countries. But critics say the pact sent hundreds of thousands of U.S. manufacturing jobs to Mexico, where corporations took advantage of low-wage labor.

Before the renegotiation began in August, many business and farm groups hoped the Trump administration would settle for tweaking rather than abandoning the trade deal — updating it, for example, to reflect the rise of e-commerce. But U.S. Trade Rep. Robert Lighthizer declared at the outset that the U.S. wouldn't be satisfied with anything but a major overhaul.

So the administration has been seeking to ensure that more auto production be made in America to receive NAFTA benefits, that more government contracts in the NAFTA bloc go to U.S. companies and that NAFTA expire unless the countries agreed every few years to extend it. It also wants to scrap a dispute-resolution process favored by Canada.

Those proposals are considered poison pills by Canada and Mexico.

Visiting Washington on Wednesday, Canadian Prime Minister Justin Trudeau told reporters that he thinks "it is very important and very possible to get a win-win-win" from the NAFTA talks. But he acknowledged that "we have to be ready for anything — and we are."

The negotiators are under pressure to reach a deal this year — before presidential elections in Mexico and midterm elections in the United States raise the political temperature in 2018.

"The administration set itself the task of doing a really radical overhaul and having it done by Christmas," says Levy, a former trade adviser to President George W. Bush. "I'm not surprised that Ambassador Lighthizer hasn't been able to square that circle."

Gary Hufbauer, senior fellow at the Peterson Institute for International Trade, says Trump "very likely" has the legal authority to withdraw from NAFTA on his own if talks collapse. But Congress can fight back. Lawmakers could pass a resolution calling on the president to obtain congressional authority before invoking the NAFTA clause that lets countries pull out. They could also threaten to block the president's agenda unless he secures congressional approval to withdraw.

If the United States left NAFTA, trade barriers to Canada and Mexico would pop back up. Some of the tariffs wouldn't be especially high. But Mexican tariffs on many American farm products could soar — to as high as 37 percent on corn, for example, notes Caroline Freund, a senior fellow at Peterson.

For that reason, many agricultural lobbies and lawmakers from farm states have urged the administration to "do no harm" in the NAFTA talks.

Daniel Ujczo, a trade lawyer with Dickinson Wright PLLC, predicts that Canada and Mexico would likely call a timeout if the United States insists on pushing contentious proposals.

"The Canadian and Mexican strategy will be to take a pause," he says, and "allow the U.S. domestic process to play itself out" with business and farm groups and many lawmakers rising to defend NAFTA.

NAFTA supporters are already rallying. In a speech Tuesday in Mexico City, Thomas Donohue, president of the U.S. Chamber of Commerce, vowed: "We're going to fight like hell to protect the agreement."

AP writer Rob Gillies in Toronto contributed to this report.