Britain desperately wants talks to move on to future trade and security arrangements but EU Commission President Jean-Claude Juncker said that more needs to be done on the withdrawal issues first. 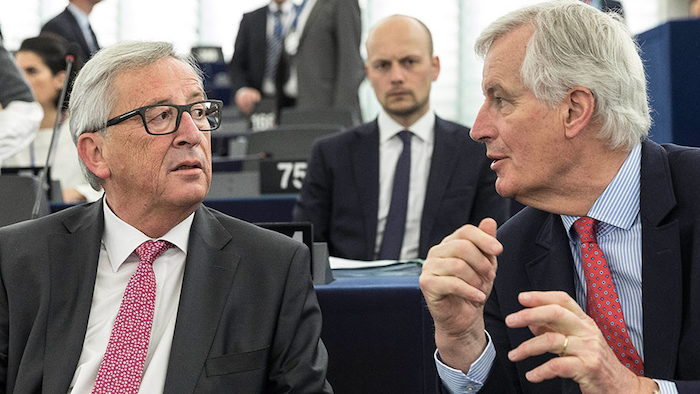 BRUSSELS (AP) — The European Union insisted Tuesday that Brexit negotiations with Britain will not move on to the question of future relations until enough progress has been made on divorce issues, such as how much the country's exit bill should be.

Britain desperately wants talks to move on to future trade and security arrangements but EU Commission President Jean-Claude Juncker said that more needs to be done on the withdrawal issues first.

Juncker told the European Parliament that "we have not made the sufficient progress needed" and the legislators backed him, approving a resolution underscoring the same point with a vote of 557 to 92 with 29 abstentions. It further underscored the unity of the 27 EU nations as they face off with Britain in the talks.

The EU wants London to commit to guaranteeing the rights of EU citizens already in Britain, making sure border posts do not reappear between the U.K.'s Northern Ireland and Ireland itself and pay up for everything it had agreed to while it was a member.

Juncker said "the taxpayers in the EU 27 should not pay for the British decision" to leave, while the bloc's chief negotiator, Michel Barnier, said "serious differences remain" on how many bills the U.K. still has to settle. Estimates vary widely from 20 billion euros ($27 billion) to over three times that amount.

"Serious rifts remain, especially on the financial settlement," Barnier said. "We will not pay at 27 what has been decided at 28, it is simple as that."

The parliamentary resolution called for postponing any move to widen the talks with Britain unless "a major breakthrough" takes place during the fifth round of negotiations in Brussels next week.

Observers said decisive progress was highly unlikely. Tuesday's moves further dampened hopes that the EU leaders might give the green light to an expansion in the talks at a summit on Oct 19-20.

Many lawmakers were also dismissive of Britain's Conservative government, which is widely seen as insecure and bumbling.

The head of the biggest party group in the European Parliament called for the sacking of British Foreign Secretary Boris Johnson for stoking confusion over the Brexit talks.

The European People's Party chairman, Manfred Weber, appealed to Prime Minister Theresa May: "Please sack Johnson, because we need a clear answer who is responsible for the British position."

Weber turned Henry Kissinger's famous observation about the many leaders in the EU onto Britain: "Who shall I call in London? Who speaks for the government? Theresa May, Boris Johnson, or even (Brexit negotiator) David Davis?"

Others are speculating that Britain might actually be stalling to make sure that the member states that trade heavily with the U.K. would buckle and concede at the last moment, sowing discord among the 27.

EPP member Tom Vandenkendelaere said the strong backing of the resolution proved differently. "If the Brits they can play their old divide-and-rule game, they'd better think again," he said.

The fire occurred at a petroleum coke flowline.
Jan 21st, 2022

Rule of law has worsened since the country's military overthrew the elected government.
Jan 21st, 2022

It could be a pandemic game changer globally.
Jan 19th, 2022
Follow Us
Most Recent