The cost of cleaning up the oil spill that fouled beaches last month on the California coast has reached $62 million so far, the pipeline company said Wednesday. 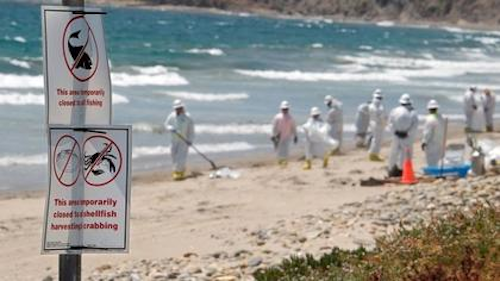 The cost of cleaning up the oil spill that fouled beaches last month on the California coast has reached $62 million so far, the pipeline company said Wednesday.

Costs are running at $3 million a day, and there is no timetable for when the cleanup will be complete, Plains All American Pipeline's on-scene coordinator, Patrick Hodgins, told The Associated Press.

The company is responsible for footing the bill after a pipeline break near Santa Barbara forced the closure of two state beaches and prompted a fishing ban in the area.

Hodgins said the pipeline operator is not focused on the money.

"The responsibility here is to get it cleaned up as quickly as possible," he said.

About 76 percent of 97 miles of coastline — mostly sandy beaches — have been cleared of oil. Crews are using putty knives and other tools to scrape oil off rocks and cobble beaches — a labor-intensive process that's dictated by tidal conditions.

The May 19 spill occurred after an onshore pipeline operated by Texas-based Plains All American ruptured, leaking up to 101,000 gallons of crude.

About 21,000 gallons entered a storm drain and washed out to the Pacific Ocean off Santa Barbara County.

The toll of the spill is a sliver of the 1969 oil platform blowout off Santa Barbara County that blackened miles of coastline and killed thousands of shorebirds and other wildlife.

At the height of the cleanup, there were almost 1,200 people involved. Eighteen boats skimmed oil from the water while a pair of helicopters and a fixed-wing aircraft buzzed overhead. Crews have not used the aircraft for several days and the number of skimmers has been reduced to three.

The cause of last month's break has not been determined, but documents released by federal regulators after the spill said testing conducted in early May found extensive external corrosion along some sections of the pipeline.

Hodgins declined to comment on the investigation by the federal Pipeline and Hazardous Materials Safety Administration.

As cleanup continued, the California Coastal Commission said at its monthly meeting Wednesday that it notified the company that it has opened its own investigation.

SMBs: When Will Aid Arrive?

With bills fast coming due, no end to business closings and an economy that's all but shut down, owners are worried about survival.
Joyce M. Rosenberg
Mar 31st, 2020

The unrest called attention to mounting discontent among low-wage workers who are on the front lines of the pandemic.
Alexandra Olson
Mae Anderson
Mar 31st, 2020

Huawei is at the center of tensions with Washington over China's technology ambitions and possible spying.
Joe McDonald
Mar 31st, 2020

The ruling Communist Party is trying to revive the world’s second-largest economy after declaring victory over the coronavirus.
Associated Press
Mar 31st, 2020

Germany Says Rebound May Be Quick

The base scenario is a V-shaped recovery, with a sharp downturn and quick rebound.
Associated Press
Mar 30th, 2020

Moon Bases Made of Urine

A team of researchers has a solution and it involves a 3D printer, moon dust, water (from lunar ice) and astronaut urine.
Unit 202 Productions
Eric Sorensen
David Mantey
Mar 30th, 2020