Photos of Ruptured Oil Pipeline Provide Clues of Spill Cause

Photos of the pipeline that spilled oil on the Santa Barbara coast show extensive corrosion and provide clues about the cause of the rupture, experts said. 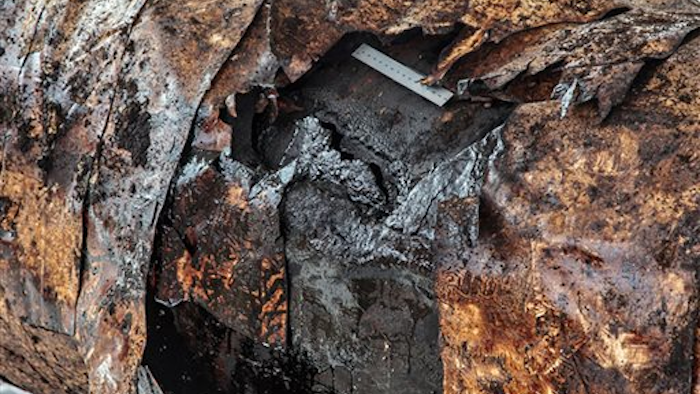 Photos of the pipeline that spilled oil on the Santa Barbara coast show extensive corrosion and provide clues about the cause of the rupture, experts said.

Corrosion visible around the crack, coupled with wear documented inside the pipe, led Robert Bea, a civil engineering professor emeritus at the University of California, Berkeley, to believe the pipe burst during a pressure spike when the operator restarted pumps that had failed the morning of the May 19 spill.

The pictures released to The Associated Press on Monday under a California Public Records Act request show the 6-inch tear that spewed up to 101,000 gallons of oil, polluting beaches and killing hundreds of birds and marine mammals.

Plains All American Pipeline has declined to discuss the cause of the spill while it's being investigated by federal regulators and local, state and U.S. prosecutors. The pipeline operator has apologized for the spill and is paying cleanup costs that have exceeded $60 million.

Bea said the photos provided by Santa Barbara County show about 10 percent of the pipe's outer wall had deteriorated from corrosion.

A test conducted for the company two weeks before the spill showed up to 45 percent of the pipe's interior wall was gone. Bea calculated that with the walls at least half corroded, the pipe would have failed during a restart when the pressure surged to a reported 700 pounds per square inch.

What alarmed Bea was that an external examination of the pipe in three other areas showed up to 74 percent of the pipe wall had deteriorated.

"I don't think I'd want to start pumping crude through this existing pipeline," he said. "I'd just replace the whole pipeline. I wouldn't try to patch it."

It's not clear what regulators with the Pipeline and Hazardous Materials Safety Administration will require Plains to do when the investigation is complete. Initially, the agency ordered the company to keep the 2-foot-wide pipe and a bigger pipeline it joins shut down while more testing is done.

Richard Kuprewicz, a pipeline safety expert, said the photos did not show enough detail to reach conclusions about the cause but he said there was notable deterioration in the protective wrapping around the pipe.

Kuprewicz, president of Accufacts Inc., said that could undermine cathodic protection, a low-level electric current run through the pipeline to ward off corrosion.

Federal regulators noted in preliminary tests that cathodic protection was adequate at other sites along the pipeline, but Kuprewicz and Bea said that doesn't mean it was sufficient at the site of the rupture.

Bea also noted that a sag in the pipe in the area of the rupture could have led to greater corrosion inside and outside the pipe and made it harder for cathodic protection to be effective.

This story has been corrected to say external tests showed up to 74 percent of the pipe's wall had deteriorated, instead of specifying inner wall.