One year after unveiling an aggressive plan, Obama said Wednesday that new emissions limits on power plants, renewable energy projects and new incentives for green technology have cleared the way for further action in the U.S. and abroad. 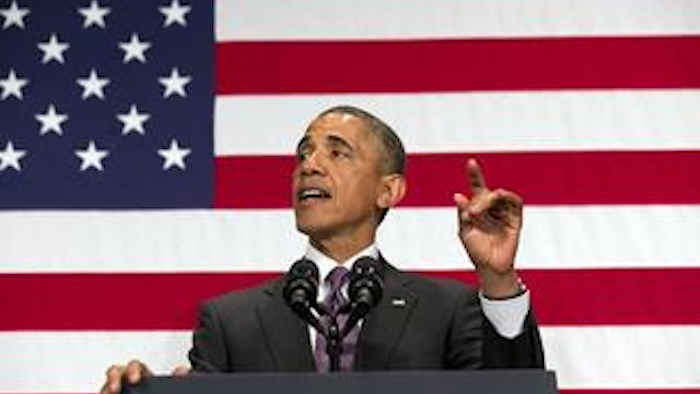 WASHINGTON (AP) -- President Barack Obama claimed progress in his second-term drive to combat climate change but said more must be done to address a generational problem. He appealed for patience and perseverance from environmental activists.

One year after unveiling an aggressive plan, Obama said Wednesday that new emissions limits on power plants, renewable energy projects and new incentives for green technology have cleared the way for further action in the U.S. and abroad, despite steadfast opposition from much of Congress.

"When you take those first steps, even if they're hard, and even if there are politics sometimes, you start building momentum and you start mobilizing larger and larger communities," Obama said. "Every step makes a difference."

Obama's remarks to the League of Conservation Voters served as a progress report for his climate plan, which the president laid out with much fanfare last June at Georgetown University. Twelve months later, much of the plan is in motion, although the most ambitious steps are still up in the air and will take years to be fully realized.

Indeed, many of the steps he's taking are modest, limited in scope by hostility from both parties to putting a price on carbon pollution, which would require new laws from Congress. Still, Obama said he's seeking to tackle the problem but cutting it up into smaller pieces.

"We're moving, and it's making a difference," he told a supportive crowd at LCV's annual dinner. The environmental group backed Obama early in his 2008 campaign.

The Center for Climate and Energy Solutions, a nonpartisan group formerly associated with the Pew Center, said this week that Obama has made at least some progress on most of the 75 goals he laid out last June. Those steps will require follow-through, but if the administration keeps up the pace it achieved in the past year, the U.S. could meet its 17 percent goal, the center said.

The centerpiece of Obama's plan, carbon limits on existing power plants, is on track after the Environmental Protection Agency met its deadline to issue a draft, although the timeline for states to comply has been delayed in some cases. Still, the limits have drawn major opposition from Republicans and some Democrats and will face legal challenges that could threaten their durability.

"The president has no more elections to win, yet he allows the narrow interests of his most extreme political allies to dictate an agenda that puts jobs and opportunity out of reach," said House Speaker John Boehner, R-Ohio.

Obama delighted in mocking Republicans in Congress who dispute climate change or refuse to take a position on the grounds that they're lawmakers, not scientists.

"Folks will tell you climate change is a hoax, or a fad, or a plot. It's a liberal plot!" Obama said, standing in front of a giant American flag for a speech that had all the trappings of a campaign rally.

Obama has also started the clock on carbon limits for new power plants, although the low cost of cleaner-burning natural gas means few new coal-fired plants will be built in the U.S. anyway.

Obama's administration has approved 10 new renewable energy projects on public lands, but is less than halfway toward its goal of increasing solar, wind and geothermal output by 8,100 megawatts. The administration has also proposed nine new standards for energy efficiency and finalized eight others, seeking to curb emissions from appliances and other equipment.

Yet on the international front, momentum has been elusive. Ahead of global climate talks next year in Paris, there are fresh signs that countries like Australia are prodding Canada and others to resist global moves to curb carbon. That could dissuade even bigger polluters, like China, from acting.

Heather Zichal, the former White House adviser who spearheaded Obama's plan, said the president is well on its way to carrying out the domestic steps he promised last year.

"The question is, What degree of success will the administration have in bringing other countries to the table?" she said.