The chairman of Taiwanese electronics giant Foxconn said it may spend more than $10 billion to set up manufacturing in the United States, and will announce investment plans by early August for at least three states. 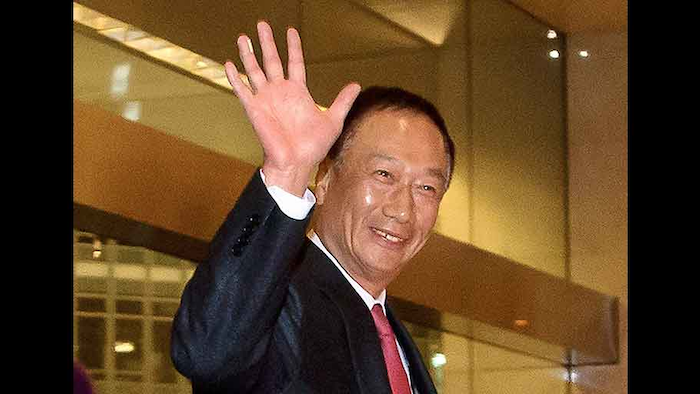 TAIPEI, Taiwan (AP) — The chairman of Taiwanese electronics giant Foxconn said Thursday it may spend more than $10 billion to set up manufacturing in the United States, and will announce investment plans by early August for at least three states.

Terry Gou gave no new information about where Foxconn will locate a U.S. display panel factory he said in January would cost up to $7 billion to build. That announcement triggered a flurry of lobbying by state leaders hoping to attract the investment, which he said might generate as many as 50,000 jobs.

Foxconn is the biggest contract manufacturer of smartphones and other devices for Apple, Sony, Blackberry and other brands. Its success has made Gou Taiwan's richest businessman. The company raised its profile with its purchase in March 2016 of struggling Japanese electronics brand Sharp for $3.5 billion.

The company plans to develop operations in the U.S. that combine hardware manufacturing and software development in technologies including artificial intelligence and automation, Gou said at a meeting with shareholders. Asked later at a news conference how much Foxconn might invest during the five-year plan, he said it might exceed $10 billion.

Foxconn has been in touch with the White House and expects to conclude negotiations by the end of July or early August, Gou said. He said the first investment agreement should cover at least three states, with at least three others to be added later.

The display panel factory, if built, would be a political trophy for U.S. President Donald Trump, who has promised to revive American manufacturing in the Midwest.

Gou mentioned Ohio, Pennsylvania, Michigan, Illinois, Wisconsin, Indiana and Texas as manufacturing states with which Foxconn hopes to work but gave no indication whether any of them might be in the investment agreement. Gou said in January that Pennsylvania was the leading candidate for the panel factory, which would work with Sharp.

Details for each state were not settled, but overall, "we will provide at least tens of thousands of job opportunities," said Gou at the news conference.

Expansion into the United States would reduce Foxconn's reliance on China, where it has the bulk of its operations and employs about 1 million people.

Also Thursday, Gou said there is "still a chance" Foxconn might be able to buy Toshiba Corp.'s memory chip business despite the Japanese company's choice of another bidder as its preferred buyer.

Toshiba said Wednesday it picked a bid totaling about 2 trillion yen ($18 billion) by a U.S.-Japan consortium. Toshiba is selling the lucrative operation due to losses at its U.S. nuclear power unit, Westinghouse Electric Co.

"It is not a done deal yet. I believe there is still a chance for Foxconn," Gou said.

He noted that Toshiba's choice of the U.S.-Japanese consortium faced opposition, including from Japanese banks.

Western Digital of the United States also opposes the choice. It owns SanDisk chip operations that have a joint venture with Toshiba in Japan and says the company has no right to transfer that venture without the American partner's consent.

Vaccinations May Soon Be Required for International Flyers

The automaker is withdrawing from the Trump administration's lawsuit against California, and urged other car companies to do the same.
Nov 23rd, 2020

It will be Ferrero's first chocolate production plant in North America.
Nov 23rd, 2020

Both sides hope to get a trade deal in time to protect hundreds of thousands of jobs that could be affected.
Nov 23rd, 2020

Alleging food safety issues, the protests decried ending Taiwan's long-standing ban on US pork and beef imports that due to be lifted in January.
Nov 23rd, 2020

Officials said operating the massive telescope is too dangerous given the significant damage it recently sustained.
Nov 20th, 2020

Japanese astronaut Soichi Noguchi — only the third person to launch aboard all three — said the Dragon “really wanted to go to space.”
Nov 20th, 2020

The Pirs spacewalking module will be removed and junked to make room for the long-delayed Nauka research lab.
Nov 19th, 2020

Several other retailers were implicated in the investigation.
Nov 19th, 2020

Xi Says China Won't Separate from US, Europe Despite Tension

The spat has prompted fears that world markets might split into smaller segments with incompatible industry standards.
Nov 19th, 2020
Follow Us
Most Recent