This marks a milestone in China's long-term goal to break into the Western-dominated aircraft market. 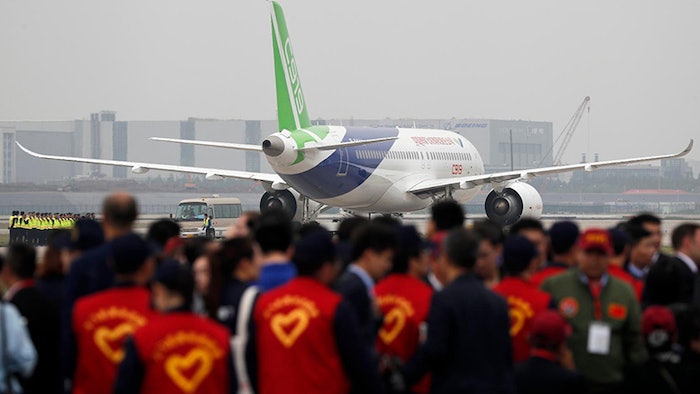 Attendees gather as a Chinese C919 passenger jet sits on the tarmac before its scheduled first flight at Pudong International Airport in Shanghai, Friday, May 5, 2017. China is touting the C919 as a rival to single-aisle jets the Airbus A320 and Boeing 737. The plane was originally due to fly in 2014 before being delivered to buyers in 2016, but has been beset by delays blamed on manufacturing problems. (AP Photo/Andy Wong, Pool)

The first large Chinese-made passenger jetliner completed its maiden test flight on Friday, a milestone in China's long-term goal to break into the Western-dominated aircraft market.

The takeoff of the C919 brought cheers and applause from hundreds of invited guests at Shanghai Pudong International Airport and was broadcast live on Chinese state television. The jet soon became invisible on a windy and polluted day in Shanghai, which was also in the path of dense sandstorms from the north.

After the 1 ½ hour flight was over, the test pilots came down smiling from the plane, wearing orange overalls with the Chinese flag.

With the flight, the official Xinhua News Agency said China had become "one of the world's top makers of jumbo aircraft," becoming the fourth large jet producer after the U.S., Europe and Russia.

China is touting the C919 as a rival to single-aisle jets such as the Airbus A320 and Boeing 737. It was originally due to begin flying in 2014 and be delivered to buyers in 2016, but has been beset by delays blamed on manufacturing problems. It's now unlikely to carry commercial passengers until at least 2019.

Mohshin Aziz, a Kuala Lumpur-based aviation analyst at Maybank Kim Eng Securities, said it wouldn't be clear for 7-9 years whether the C919 can make a dent in Airbus and Boeing's duopoly.

"This is just the test flight," he said. "Eventually it needs to have some cornerstone customers, of which it will have because there are state-owned airlines, some of them are going to be forced to use it."

Mohshin said other potential customers would wait to see what experience the first customers have. "You are not going to spend a lot of money on something you don't know," he said.

Bao Pengli, deputy director of Comac's project management department, said Thursday the manufacturer planned to make two planes a year from now to 2019 to obtain proof of safe flight before any mass production is started.

Comac says it has 570 orders from 23 domestic and foreign customers. Most are state-owned Chinese airlines. The handful of foreign customers includes GE Capital Aviation Services and Thailand's City Airways.

The jet's development is a key step on the path laid out by Chinese leaders to transform the country from the world's low-cost factory into a creator of profitable technology.

At the same time, China's aviation market is growing rapidly as a rising middle class travels more for leisure and business.

Boeing forecasts that an annual 6 percent growth in China's air passenger traffic over the next two decades will create demand for 6,810 new planes worth a total of $1 trillion — the first trillion-dollar aviation market in its forecast. Of the new planes, 75 percent are expected to be single-aisle.

Airbus has five joint ventures in China, including a factory that assembles A320s in Tianjin, a port city near Beijing, that opened in 2008. Mohshin said much of China's aircraft technology started from Russia, and the Tianjin factory has since given China's supply chain vital experience.

"I would say that a lot of their technology mirrors Airbus," he said.

Comac says more than 200 Chinese companies and 36 universities have been involved in research and development of the C919.

But it relies on foreign-made technology for critical systems, including its engines, which are made by CFM International, a joint venture between General Electric's aviation subsidiary and France's Safran Aircraft Engines. The first deliveries of Chinese-developed engines are expected in 2020, according to the company tasked with making them, AVIC Commercial Aircraft Engine Co. Ltd.

Airbus delivered 153 aircraft to Chinese operators last year, including 141 from the A320 family, Eric Chen, president of Airbus Commercial Aircraft China, said in an emailed statement.

"We believe C919 will bring new competition to the market," he said. "And we welcome competition, which is good for the development of the industry."

Boeing says it delivered more than 160 planes to China in 2016, and more than half of China's fleet are Boeing planes.

China's first domestically made commercial jet, the twin-engine regional ARJ-21, flew its first passengers in June 2016, eight years after its first test flight. That smaller jet is a rival to aircraft made by Bombardier Inc. of Canada and Brazil's Embraer SA.