What Trump's Trade And Geopolitical Moves Mean For China

With his rejection of an Asian trade pact, President Donald Trump has tackled the first in a promised series of far-reaching policy changes. 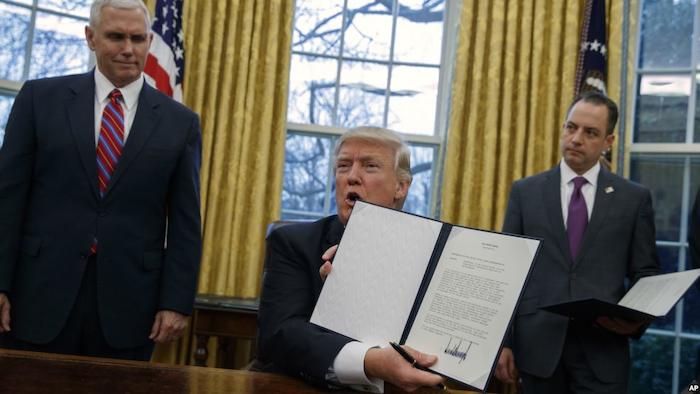 With his rejection of an Asian trade pact, U.S. President Donald Trump has tackled the first in a promised series of far-reaching policy changes that could inadvertently give China room to assert itself as a regional leader and worsen strains over the South China Sea and Taiwan.

The U.S. departure from the Trans-Pacific Partnership could help President Xi Jinping's effort to cast Beijing as a champion of free trade and might increase official interest in a Chinese-led alternative trade deal. The TPP, which excluded China, has been seen as a gambit by Trump's predecessor, Barack Obama, to counter Beijing's influence.

It could also strengthen ties with China's neighbors as Beijing prepares for potential challenges from Washington on thorny issues including claims over the South China Sea and the status of Taiwan, the self-ruled island Chinese leaders claim as part of their territory.

Here is a look at these issues and what they mean for China.

TPP And The Rise Of China

The U.S. withdrawal from TPP gives China an opening to step up as a leader in forging Asian trade agreements.

In an implicit rejection of Trump's promises to restrict imports, Xi defended free trade in a speech last week at the World Economic Forum in Switzerland, calling on other governments to reject protectionism.

"China is likely to play a much stronger lead role in the future Asia Pacific trade architecture," Rajiv Biswas, chief Asia economist for IHS Markit, said in a report.

Beijing has launched its own initiatives to develop Asian trade centered on China including a bank to finance roads, ports and railways and the "One Belt, One Road" project to develop links with European markets.

The cost of Trump's decision will fall most heavily on Chinese neighbors such as Vietnam and Malaysia that stood to gain from easier access to the U.S. market.

That could increase interest in another Chinese-led initiative, the Regional Comprehensive Economic Partnership. It is less sweeping than the TPP and would allow more protection for state-owned industry.

At the same time, Trump also has promised to pursue trade deals with individual TPP countries. 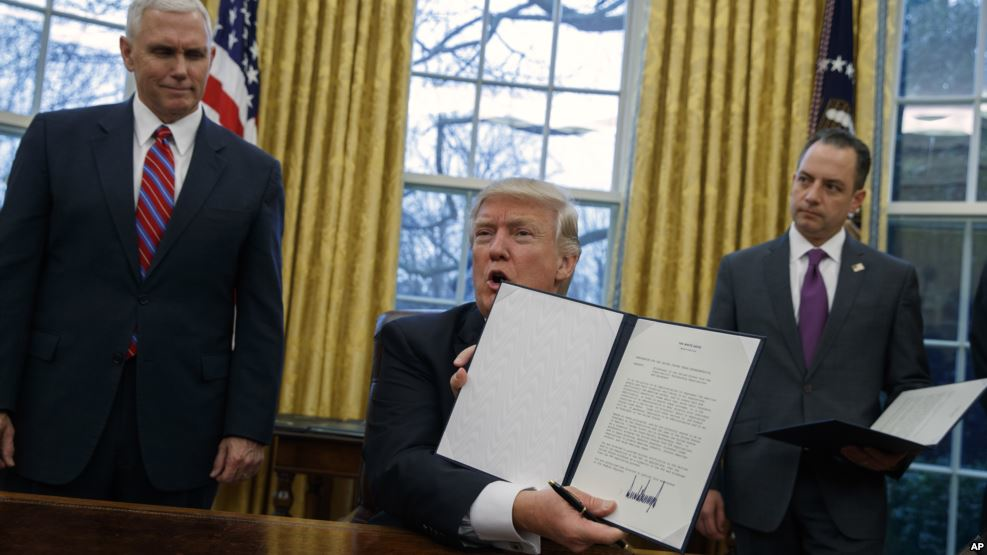 Trump's rejection of TPP is the first step in an ambitious agenda aimed at rearranging trade with Asia — with sweeping potential repercussions for regional economies.

Trump has promised to raise tariffs on Chinese goods to 45 percent and to induce American manufacturers to shift production to the United States. He says he will negotiate bilateral trade deals with individual Asian countries, which could redirect trade flows.

Those moves could erode China's influence, which stems in part from being its neighbors' biggest export market on the strength of demand by Chinese factories for raw materials and components that go into U.S.-bound goods.

The American Chamber of Commerce in China said last week that Beijing is preparing to retaliate in the event Trump goes ahead with measures to restrict imports. The chamber said Chinese authorities already have toughened their stance by imposing unusually high duties in an anti-dumping case in January aimed at a U.S. chemical used in livestock feed.

Trump's choice for secretary of state has rattled Beijing by saying Washington might try to block access to artificial Chinese islands in the South China Sea, prompting warnings the United States might face a military clash if it does.

White House press secretary Sean Spicer said Monday the Trump administration would "defend international territories" including in the South China Sea, a region of conflicting claims by China and its neighbors. Trump's nominee for top U.S. diplomat, Rex Tillerson, said earlier the United States should stop Beijing from constructing artificial islands and deny it access to them.

Beijing has protested the sailing of U.S. warships in the waters as provocative.

"If the U.S. takes actions against China's moves to protect their own sea territories, it may result in serous military confrontation," said Sun Hao, an international relations expert at the China Foreign Affairs University in Beijing.

Teng Jianqun, a scholar at the China Institute of International Studies, said he didn't believe the U.S. would follow through on the threat of a blockade, saying: "it's like announcing war. That would be ridiculous."

China's island building has irritated neighbors including the Philippines that have competing claims. They worry the islands will be used to expand China's military reach or perhaps block shipping.

"Both Tillerson and Spicer seem to be trying to show China that the Trump administration will adopt a tougher approach on the South China Sea, but it's evident that they haven't yet developed a policy," said Bonnie Glaser, senior adviser for Asia at the Center for Strategic and International Studies. Glaser said the Trump administration needed to send "clear, consistent" signals to China.

Before his inauguration, Trump raised concern in Beijing over how Washington will treat Taiwan.

Trump questioned a policy under which Washington since 1979 has recognized Beijing as China's government. He said the United States should not be bound by it without getting trade or other benefits from China. Chinese officials responded that the issue is non-negotiable and warned U.S. challenges would disrupt peace in the region.

China's Exports Up Despite Virus

US Customs will use its authority to block products suspected of being produced with forced labor.
Jan 13th, 2021

Even before the coronavirus hit, demand was hurt by consumer unease about possible job losses and Beijing's tariff war with the US.
Jan 13th, 2021

At least 160 divers were deployed to find the recorder that holds conversations between pilots.
Jan 13th, 2021

China Vows to Defend Itself Over Labor Measures

The U.K. is demanding companies' supply chains are free of forced labor from the Xinjiang region.
Jan 13th, 2021

The new event is being called Motor Bella and will be held at a nearby race track with 1.6 million square feet of display space.
Jan 12th, 2021

The automaker has been operating in the South American country since 1919.
Jan 12th, 2021

The usual extravaganza of tech may portend the future of the virtual trade show.
Jan 11th, 2021

Geely's venture with Baidu will focus on intelligent and connected vehicles.
Jan 11th, 2021

Law Cracks Down on Shell Companies to Combat Corruption

The overhaul of money laundering laws is aimed at locating the proceeds from foreign bribery, drug trafficking and financing for terrorists.
Jan 11th, 2021

The overhaul of Google's ad data system could leave even less room for rivals.
Jan 8th, 2021
Follow Us
Most Recent