The U.S. has set a goal of reducing carbon emissions by one-third from 2005 levels by 2030 with many states seeking to develop more renewable energy. 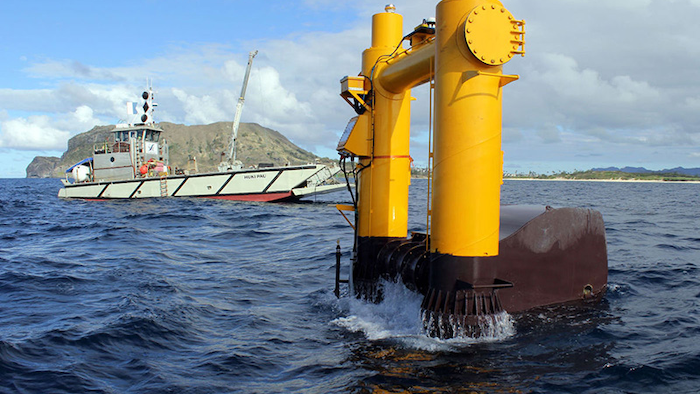 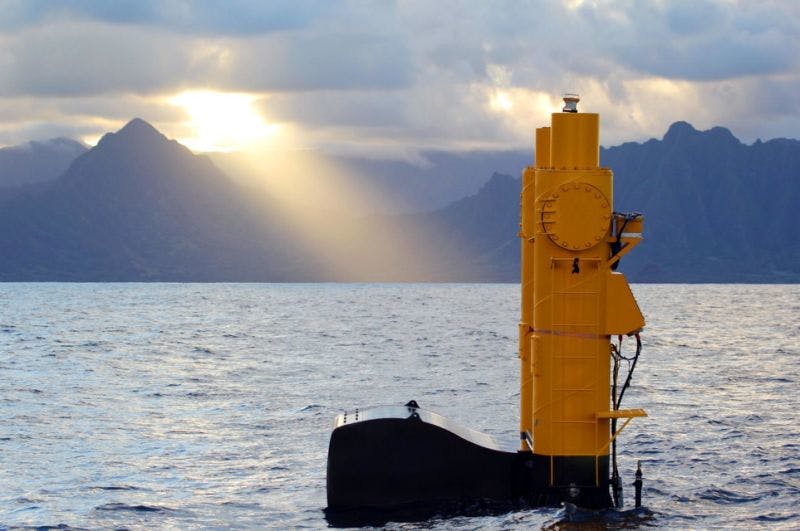 Off the coast of Hawaii, a tall buoy bobs and sways in the water, using the rise and fall of the waves to generate electricity.

The current travels through an undersea cable for a mile to a military base, where it feeds into Oahu's power grid — the first wave-produced electricity to go online in the U.S.

By some estimates, the ocean's endless motion packs enough power to meet a quarter of America's energy needs and dramatically reduce the nation's reliance on oil, gas and coal. But wave energy technology lags well behind wind and solar power, with important technical hurdles still to be overcome.

To that end, the Navy has established a test site in Hawaii, with hopes the technology can someday be used to produce clean, renewable power for offshore fueling stations for the fleet and provide electricity to coastal communities in fuel-starved places around the world.

"More power from more places translates to a more agile, more flexible, more capable force," Joseph Bryan, deputy assistant secretary of the Navy, said during an event at the site. "So we're always looking for new ways to power the mission."

Hawaii would seem a natural site for such technology. As any surfer can tell you, it is blessed with powerful waves. The island state also has the nation's highest electricity costs — largely because of its heavy reliance on oil delivered by sea — and has a legislative mandate to get 100 percent of its energy from renewables by 2045.

Still, it could be five to 10 years before wave energy technology can provide an affordable alternative to fossil fuels, experts say.

For one thing, developers are still working to come up with the best design. Some buoys capture the up-and-down motion of the waves, while others exploit the side-to-side movement. Industry experts say a machine that uses all the ocean's movements is most likely to succeed. 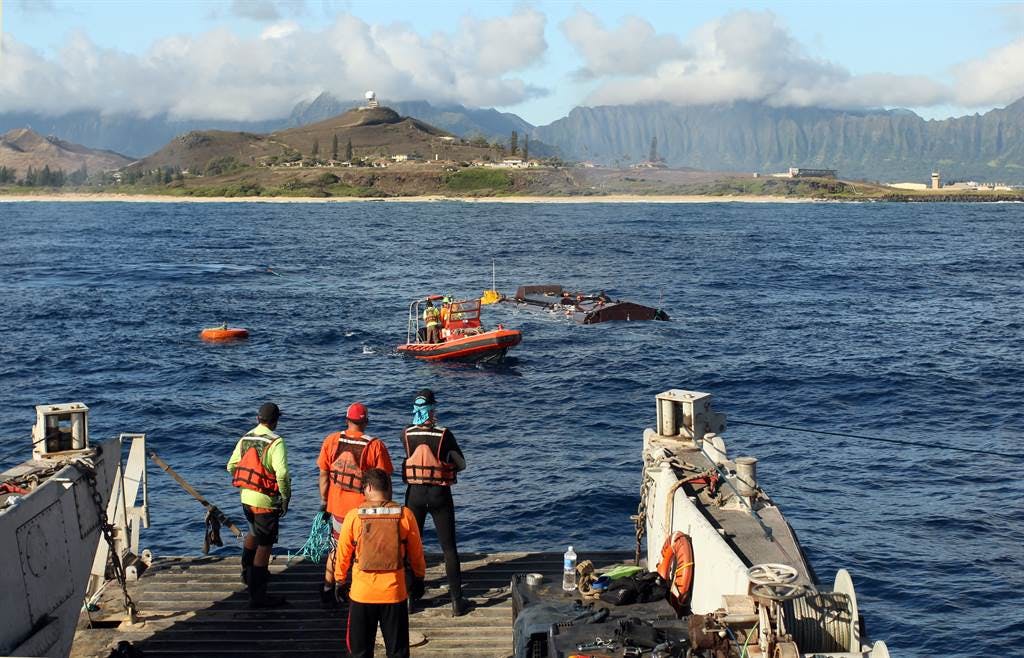 Also, the machinery has to be able to withstand powerful storms, the constant pounding of the seas and the corrosive effects of saltwater.

"You've got to design something that can stay in the water for a long time but be able to survive," said Patrick Cross, specialist at the Hawaii Natural Energy Institute at the University of Hawaii at Manoa, which helps run the test site.

The U.S. has set a goal of reducing carbon emissions by one-third from 2005 levels by 2030, and many states are seeking to develop more renewable energy in the coming decades.

Jose Zayas, a director of the Wind and Water Power Technologies Office at the U.S. Energy Department, which helps fund the Hawaii site, said the United States could get 20 to 28 percent of its energy needs from waves without encroaching on sensitive waters such as marine preserves.

"When you think about all of the states that have water along their coasts ... there's quite a bit of wave energy potential," he said.

Wave energy technology is at about the same stage as the solar and wind industries were in the 1980s. Both received substantial government investment and tax credits that helped them become energy sources cheap enough to compete with fossil fuels.

But while the U.S. government and military have put about $334 million into marine energy research over the past decade, Britain and the rest of Europe have invested more than $1 billion, according to the Marine Energy Council, a trade group. 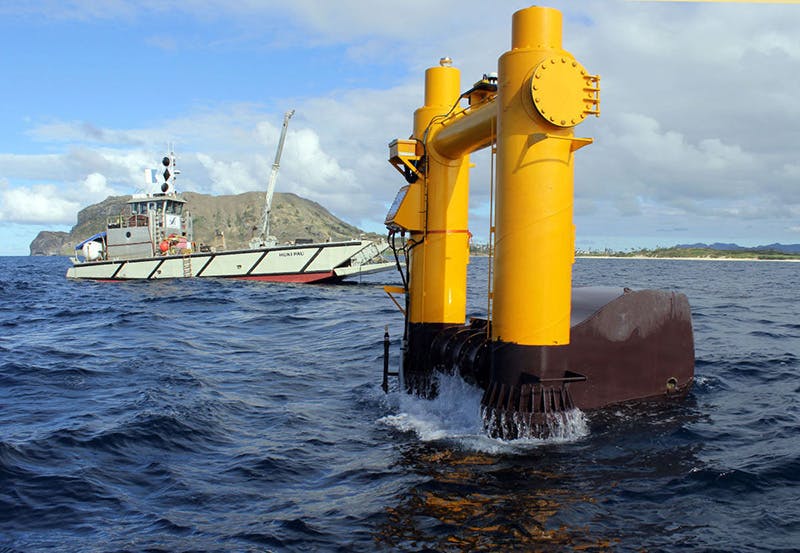 "We're about, I'd say, a decade behind the Europeans," said Alexandra De Visser, the Navy's Hawaii test site project manager.

The European Marine Energy Centre in Scotland, for example, has 14 grid-connected berths that have housed dozens of wave and tidal energy devices from around the world over the past 13 years, and Wave Hub in England has several such berths. China, too, has been building and testing dozens of units at sea.

Though small in scale, the test project near Kaneohe Bay represents the vanguard of U.S. wave energy development. It consists of two buoys anchored a half-mile to a mile offshore.

One of them, the Azura, which extends 12 feet above the surface and 50 feet below, converts the waves' vertical and horizontal movements into up to 18 kilowatts of electricity, enough for about a dozen homes. The company working with the Navy, Northwest Energy Innovations of Portland, Oregon, plans a version that can generate at least 500 kilowatts, or enough to power hundreds of homes.

A Norwegian company developed the other buoy, a 50-foot-wide, doughnut-shaped device called the Lifesaver. Cables anchor the 3-foot-tall ring to the ocean floor. When the sea wobbles the buoy, the cables move, turning a generator's wheels. It produces an average of 4 kilowatts.

Test sites run by other researchers are being planned or expanded in Oregon and California. One of them, Cal Wave, run by California Polytechnic State University, hopes to provide utility-scale power to Vandenberg Air Force Base.

The Hawaii buoys are barely noticeable from shore, but developers envision dozens of machines working at once, an idea that could run into the same opposition wind turbines have faced from environmentalists, tourist groups and others.

"Nobody wants to look out and see wind turbines or wave machines off the coast," said Steve Kopf, CEO of Northwest Energy Innovations.

How smart tactile surfaces are now being used as novel human-machine interfaces.
May 24th, 2022

In different times the question could have been academic, but today it's urgent.
May 24th, 2022

The automaker said it would build two electric vehicle battery factories in North America.
May 24th, 2022

It has a future in mine countermeasures and anti-submarine warfare.
May 23rd, 2022

The company will provide spare parts, material and engineering support for an entire fleet of helicopters.
May 23rd, 2022
Follow Us
Most Recent