After 18 years of negotiation, Russia on Wednesday entered the World Trade Organization, which restricts import duties and subsidies in an attempt to create a level playing field for international trade. Russia is one of the last major global economies to enter the group, which has long included other developing nations like China. 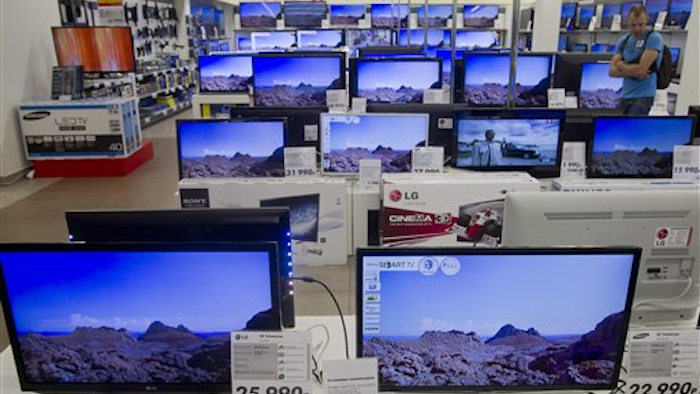 MOSCOW (AP) — After 18 years of negotiation, Russia on Wednesday entered the World Trade Organization, which restricts import duties and subsidies in an attempt to create a level playing field for international trade.

Analysts and politicians hope that Russia, which has long proven a formidable market to foreign investors because of its byzantine bureaucracy and protectionist tariffs, would be transformed by its entry into the WTO. Russia is one of the last major global economies to enter the group, which has long included other developing nations like China.

While consumers here will benefit from the lower cost of imported goods, some worry that struggling industries long coddled by state subsidies, such as agriculture or the automobile industry, will suffer from foreign competition.

Russians often complain about the burdensome cost of Western-imported consumer products, which range from refrigerators to jeans. With its entry into the WTO, the country will cut its average import tariff by 5.9 percent, making those imports cheaper.

M. Video, one of Russia's largest electronics retailers whose shelves are packed with foreign-made CD players and American movies, said Russia's entry into the WTO would bring more customers into their stores.

"We believe that (entry into the WTO) is going to be a very good decision for our customers in the future, because they will be able to purchase goods with prices harmonized with other economies," said Enrique Fernandez, chief commercial officer of the company.

But uncompetitive domestic goods, which have long been propped up by Soviet-style subsidies, could be threatened by the invasion of higher-quality imports. Nearly 100 major business leaders and industry groups including dairy and meat producers signed a petition earlier this summer addressed to the ruling United Russia party, asking that its deputies vote against ratification of the WTO treaty.

Agriculture, the automobile industry, and Soviet-style "Monogorods," or towns which revolve around a single factory or industry, are bound to suffer next to foreign competition unless they can reform quickly. These industries are based in regions that have often displayed the most support for President Vladimir Putin, but could easily turn into a hotbed for protest if already fragile industries were to collapse.

At a car dealership in Moscow, 63-year-old engineer Alexei Tarakanov said he doubted that low-quality Russian cars could win on an open market.

"I already have a negative attitude towards our (Russian) cars," said Tarakanov, who was buying a Renault. "I doubt that they can win the preference of the modern buyer."

Because state-subsidized industries proved such a pivotal issue in Russia's WTO negotiations, financial aid to struggling sectors will be gradually phased out, rather than abruptly cut off, over the course of seven years.

"The industry will not collapse immediately, (major Russian car-maker) AvtoVaz is going to continue steadily producing its 700,000 cars per year," said Ovanes Oganisyan, an analyst at the Moscow-based investment bank Troika Dialog. "But eventually there's going to be more competition, and if AvtoVaz doesn't change in seven years it will have to go out of business."

In addition to the challenges faced by unreformed industries, the Russian government expects to take a short-term financial hit from the loss of income from import duties and taxes. But the government emphasizes long-term gains, and the World Bank has estimated that WTO membership could increase Russia's GDP by an extra 3.3 percent a year in the next three years.

While the WTO will significantly open up the Russian market to foreign producers, the U.S. faces the threat of paying higher tariff rates than other WTO members to sell goods in Russia, leaving American producers at a competitive disadvantage compared to European or Asian industries.

The reason for the disparity is the Jackson-Vanik Amendment, a law passed by Congress during Soviet times that denies Russia normal trade relations with the U.S.

The U.S. president has been granting Russia annual waivers since 1992, but Moscow insists it will not lower its tariffs for the U.S. as much as for other countries until the law is scrapped.

"The last thing that America needs right now is for foreign companies to have lower tariff rates than American companies," said Andrew Somers, President and CEO of the American Chamber of Commerce.

Vice President Joe Biden lobbied for the repeal of Jackson-Vanik in 2011, as have previous presidential administrations, but Congress has so far proven intransigent to executive pleas.

Congress has increasingly taken fire at the Russian administration for its human rights record. In June, the U.S. House of Representatives passed the Justice for Sergei Magnitsky Act, a bill named for a Russian lawyer who died in a Russian prison last year after allegedly being abused at the hands of Russian authorities.

This week, President Barack Obama expressed his disappointment after the three participants of Pussy Riot, a punk band who sang an anti-Putin prayer in Moscow's Cathedral of Christ the Savior, were convicted to two years in prison.

"Business hates uncertainty," said Somers, "If the Jackson-Vanik Amendment remains on the books and the U.S. continues not to have normal trade relations with Russia, who knows what will happen."