Here's a rundown of what happened. 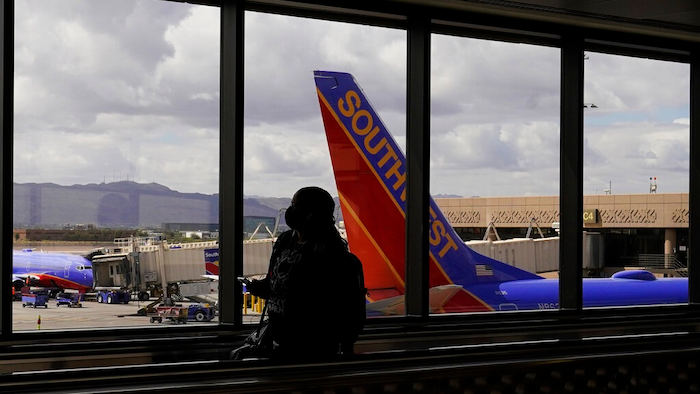 A passenger walks past a Southwest Airlines plane at Sky Harbor International Airport in Phoenix, March 26, 2021. AT&T and Verizon have agreed to delay the launch of a new slice of 5G service by two weeks after airlines and the nation's aviation regulator complained about potential interference with systems on board planes.
AP Photo/Sue Ogrocki, File

The rollout of new 5G wireless service in the U.S. failed to have the much-dreaded result of crippling air travel, although it began in rocky fashion, with international airlines canceling some flights to the U.S. and spotty problems showing up on domestic flights.

Airline industry officials say the decision by AT&T and Verizon — under pressure from the White House — to delay activating 5G towers near many airports has defused the situation.

The delay is giving the Federal Aviation Administration more time to clear more planes to operate freely around 5G networks. On Thursday, the FAA said it had granted new approvals that will allow an estimated 78% of the U.S. airline fleet to make landings even under low-visibility conditions at airports where the new, faster wireless service has been turned on.

That still leaves about one-fifth of the fleet vulnerable to being prevented from landing at some airports during bad weather, but that chunk is certain to shrink. The CEOs of American and United say they don’t expect any major disruptions to flights.

Here is a rundown of what happened.

WHAT'S THE CONCERN ALL ABOUT?

Cellphone companies have been rolling out next-generation 5G service for a few years, and this latest slice of it, the so-called C-Band, helps make AT&T and Verizon more competitive with T-Mobile. It promises faster and more stable wireless networks. But 5G is still mostly promise and less actual applications. For now, it lets you download a movie much faster. But the telecommunications industry is touting it as critical for autonomous vehicles, modern manufacturing, smart cities, telehealth and other fields that would rely on a universe of internet-connected devices.

The concern comes from the fact that this latest bit of 5G operates on part of the radio spectrum that is close to the range used by aircraft instruments called radio altimeters, which measure how high aircraft are above the ground.

The issue was highlighted in a 2020 report by RTCA, an aviation research group, prompting pilots and airlines to sound alarms about possible radio interference that could jeopardize safety. The telecom industry, led by trade group CTIA, disputes the 2020 report and says 5G poses no risk to aviation.

WHY DID AIRLINES CANCEL SOME FLIGHTS TO THE U.S. THIS WEEK?

International airlines canceled some flights that were scheduled to operate just as the new networks went live. They feared not being able to land at their destinations under 5G-related restrictions imposed by the FAA.

Airlines canceled more than 350 flights on Wednesday, according to FlightAware. That sounds like a lot, but it’s just 2% of all scheduled flights — and it's likely most of them got scrubbed for other reasons. For context, there were nearly 10 times as many cancellations on Jan. 3, when airlines struggled with winter weather and large numbers of employees calling in sick with COVID-19.

IS THE PROBLEM SOLVED?

No, although the FAA says it is making progress by determining that more altimeters are adequately protected against interference from 5G C-Band signals. Planes with certain altimeters might never be approved, which means the operators would likely have to install new equipment to land at all airports.

IS THIS A PROBLEM ONLY IN THE U.S.?

For the most part, yes. The FAA says there are several reasons why the 5G C-Band rollout has been more of a challenge for airlines in the U.S. than in other countries: Cellular towers use a more powerful signal strength than those elsewhere; the 5G network operates on a frequency closer to the one many altimeters use, and cell tower antennae point up at a higher angle. CTIA disputes the FAA’s claims.

In France, 5G networks near airports must operate at reduced power to lower the risk of interference with planes.

IS THE 5G ROLLOUT COMPLETE?

No. Verizon and AT&T activated about 90% of their 5G C-Band towers this week but agreed not to turn on those within a 2-mile radius of many airports. The companies still want to activate those towers, but there might not be agreement until the FAA is satisfied that an overwhelming portion of the airline fleet can operate safely around the signals.

WHAT COMPANIES ARE INVOLVED IN THE ISSUE?

Besides the two big telecommunications companies, the list includes aircraft makers Boeing and Airbus and altimeter subcontractors Collins, Honeywell and Thales. Then there are the airlines, whose dire warning this week of widespread flight cancellations added to pressure on the telecommunications companies to delay activating this type of 5G service around airports.

WHOSE SIDE IS THE GOVERNMENT ON?

The Federal Communications Commission, which conducted the $80 billion auction that awarded C-Band spectrum to Verizon and AT&T, says there is enough buffer between this slice of 5G and aircraft altimeters for safety. But the FAA and Transportation Secretary Pete Buttigieg took the airlines' side in the dispute. They asked the telecom companies to delay their rollout around airports.

Some experts say poor coordination and cooperation among the two federal agencies is as much to blame as any technical issues.

WHY DID IT COME TO A CRISIS?

That should not have happened. The FAA and airlines had plenty of notice that C-Band was coming — it's been talked about for years. They say they tried to raise their concerns but were ignored by the FCC.

American Airlines CEO Doug Parker indicated he was happy with the resolution but not the process.

“It wasn’t our finest hour, I think, as a country," he said.