The Keystone XL Pipeline Is Dead

After years of controversy, the sponsor of the pipeline has pulled the plug. 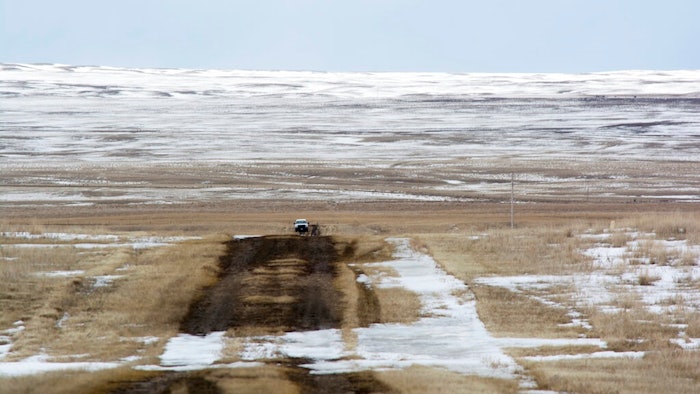 In this March 11, 2020, file photo provided by the Bureau of Land Management, shows the proposed route of the Keystone XL oil pipeline where it crosses into the United States from Canada in Phillips County, Mont. Calgary-based TC Energy, sponsor of the Keystone XL crude oil pipeline, said Wednesday, June 9, 2021, that it was pulling the plug on the contentious project after Canadian officials failed to convince President Joe Biden to reverse its cancellation of its permit on the day he took office.
Al Nash/Bureau of Land Management via AP, File

BILLINGS, Mont. (AP) — The sponsor of the Keystone XL crude oil pipeline pulled the plug on the contentious project Wednesday after Canadian officials failed to persuade President Joe Biden to reverse his cancellation of its permit on the day he took office.

Calgary-based TC Energy said it would work with government agencies “to ensure a safe termination of and exit" from the partially built line, which was to transport crude from the oil sand fields of western Canada to Steele City, Nebraska.

Construction on the 1,200-mile (1,930-kilometer) pipeline began last year when former President Donald Trump revived the long-delayed project after it had stalled under the Obama administration. It would have moved up to 830,000 barrels (35 million gallons) of crude daily, connecting in Nebraska to other pipelines that feed oil refineries on the U.S. Gulf Coast.

Canadian Prime Minister Justin Trudeau had objected to the move , raising tensions between the U.S. and Canada. Officials in Alberta, where the line originated, expressed frustration in recent weeks that Trudeau wasn't pushing Biden harder to reinstate the pipeline’s permit.

Alberta invested more than $1 billion in the project last year, kick-starting construction that had stalled amid determined opposition to the line from environmentalists and Native American tribes along its route.

Alberta officials said Wednesday they reached an agreement with TC Energy, formerly known as TransCanada, to exit that partnership. The company and province plan to try to recoup the government's investment, although neither offered any immediate details on how that would happen.

“We remain disappointed and frustrated with the circumstances surrounding the Keystone XL project, including the cancellation of the presidential permit for the pipeline’s border crossing," Alberta Premier Jason Kenney said in a statement.

The province had hoped the pipeline would spur increased development in the oil sands and bring tens of billions of dollars in royalties over decades.

Climate change activists viewed the expansion of oil sands development as an environmental disaster that could speed up global warming as the fuel is burned. That turned Keystone into a flashpoint in the climate debate, and it became the focus of rallies and protests in Washington, D.C., and other cities.

Environmentalists who had fought the project since it was first announced in 2008 said its cancellation marks a “landmark moment” in the effort to curb the use of fossil fuels.

“Good riddance to Keystone XL,” said Jared Margolis with the Center for Biological Diversity, one of many environmental groups that sued to stop it.

On Montana’s Fort Belknap Reservation, tribal president Andy Werk Jr. described the end of Keystone as a relief to Native Americans who stood against it out of concerns a line break could foul the Missouri River or other waterways.

Attorneys general from 21 states had sued to overturn Biden’s cancellation of the pipeline, which would have created thousands of construction jobs. Republicans in Congress have made the cancellation a frequent talking point in their criticism of the administration, and even some moderate Senate Democrats including Montana's Jon Tester and West Virginia's Joe Manchin had urged Biden to reconsider.

Tester said in a statement Wednesday that he was disappointed in the project's demise, but made no mention of Biden.

Wyoming Sen. John Barrasso, the top Republican on the Senate energy committee, was more direct: “President Biden killed the Keystone XL Pipeline and with it, thousands of good-paying American jobs.”

A White House spokesperson did not immediately respond to a request for comment on TC Energy's announcement. In his Jan. 20 cancellation order, Biden said allowing the line to proceed "would not be consistent with my administration’s economic and climate imperatives.”

TC Energy said in canceling the pipeline that the company is focused on meeting “evolving energy demands” as the world transitions to different power sources. It said it has $7 billion in other projects under development.

Keystone XL’s price tag had ballooned as the project languished, increasing from $5.4 billion to $9 billion. Meanwhile, oil prices fell significantly — from more than $100 a barrel in 2008 to under $70 in recent months — slowing development of Canada’s oil sands and threatening to eat into any profits from moving the fuel to refineries.

A second TC Energy pipeline network, known simply as Keystone, has been delivering crude from Canada's oil sands region since 2010. The company says on its website that Keystone has moved more than 3 billion barrels of crude from Alberta and an oil loading site in Cushing, Oklahoma.

Candle Co. with Plant Leveled by Tornado Will Expand

The company's plant in Mayfield took a direct hit from the tornado that devastated the town last December.
Jun 24th, 2022

Over 500 people are suing, saying they've been severely burned by exploding pressure cookers.
Jun 22nd, 2022
Follow Us
Most Recent