The Senate pressed ahead Wednesday on a huge, bipartisan spending bill aimed at keeping the government running through September and ruling out the chance of a government shutdown later this month. Chamber leaders were increasingly confident that a logjam that has stalled the bill since Tuesday would be broken. 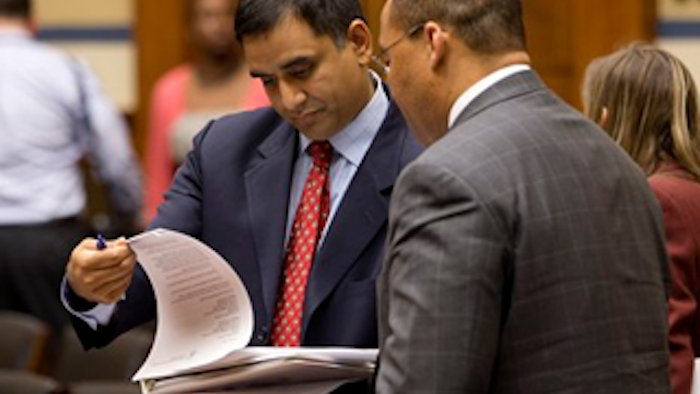 WASHINGTON (AP) — The Senate pressed ahead Wednesday on a huge, bipartisan spending bill aimed at keeping the government running through September and ruling out the chance of a government shutdown later this month.

Chamber leaders were increasingly confident that a logjam that has stalled the bill since Tuesday would be broken and that the measure would pass by late afternoon and return to the House, where a vote on Thursday would send it to President Barack Obama for his signature.

Sen. Roy Blunt, R-Mo., said he's been promised a vote on an amendment — eagerly sought by the meatpacking and poultry industries — that would offer them relief from food inspector furloughs that threaten to intermittently shutter plants.

The measure would fund the day-to-day operating budgets of every Cabinet agency through Sept. 30, provide another $87 billion to fund overseas military operations in Afghanistan and Iraq, and maintain a pay freeze for federal workers.

The measure gives the Pentagon much-sought relief from a cash crunch in accounts for training and readiness, gives veteran health programs their scheduled increases and sets the detailed, line-by-line budgets for agencies such as Commerce, NASA, Agriculture and Justice.

The measure leaves in place automatic budget cuts of 5 percent to domestic agencies and 8 percent to the Pentagon. The cuts have largely been unnoticed by the public but are making lawmakers uncomfortable, especially as intermittent layoffs known as furloughs begin to take effects next month.

The fear of those furloughs compromising safety at 173 airports slated to lose their air traffic controllers led Sen. Jerry Moran, R-Kan., to seek to restore funding to prevent the layoffs. He was denied an attempt to amend the measure, which led him to drag out debate.

Democrats have generally resisted efforts to fix the automatic cuts on an ad hoc basis, arguing that the so-called sequester needs to be replaced in its entirety as part of a broader budget deal.

The developments in the Senate come as the House resumed debate on the budget for next year and beyond. Republicans are pushing a plan that promises sharp cuts to federal health care programs and domestic agency operating budgets as the price for balancing the budget in a decade. That plan, by Budget Committee chairman and failed GOP vice presidential nominee Paul Ryan of Wisconsin, also contains a hotly contested provision calling for transformation of Medicare for beneficiaries born in 1959 and after into a program that subsidizes health insurance premiums instead of directly paying hospital and doctor bills.

The House was set to consider a set of alternative budgets from the left and right on Wednesday before voting on the GOP plan on Thursday. The Senate was expected to begin debate of the budget Wednesday in hopes of a vote on Friday.

The Impact Open Source Licensing Might Have on COVID-19 Vaccines

Foreman: No Problems Loading Cars onto Ship that Overturned

The ship and its cargo remain partly submerged in St. Simons Sound, waiting to be sawed into large chunks to be removed by barge.
Sep 16th, 2020

An investor alleges that footage of Nikola's truck suggested it was driving on its own, but it was actually “filmed rolling down a big hill.”
Sep 15th, 2020

The petroleum industry sought to remove hundreds of millions of gallons of corn-based ethanol from the market.
Sep 15th, 2020

Organic peroxides made at Arkema's facility caught fire and exploded after the facility was overwhelmed by flood waters.
Sep 15th, 2020

Daimler to Pay $1.5B to Settle Emissions Cheating Probes

It's not just consumer hoarding, according to the Wall Street Journal.
Sep 14th, 2020

The move that comes days after the study was suspended following a reported side-effect in a U.K. patient.
Sep 14th, 2020

The move is a sign that the grounded plane is moving closer to returning to service.
Sep 14th, 2020

The MT New Diamond, which is carrying nearly 2 million barrels of crude oil, was damaged by two fires in a little over a week.
Sep 11th, 2020
Follow Us
Most Recent