Army Troop Carriers Can Be Hacked

Adding strength in one area appears to have opened up a greater weakness.

Over the last four years the U.S. Army has been upgrading their collection of 19-ton XM1296 Stryker Infantry Carrier vehicles, which are better known as Dragoons. The primary focus has been adding firepower in the form of 30 mm automatic cannons. The vehicles can carry up to 11 soldiers.

Upgrading to a cannon from options that include a .50-caliber machine gun or 40 mm grenade launcher hoped to serve as a greater deterrent to hostile forces, but adding strength in one area appears to have opened up a greater weakness.

In a recent report from the Office of the Director of Test and Evaluation, Dragoons deployed with the 2nd Cavalry Regiment were found to be susceptible to hacks in what are described as a “contested cyber environment.” These opposing forces were able to shut down, manipulate or feed false information into key vehicle systems.

While the report didn’t specify which specific systems were found to be the most vulnerable, commentary on TheDrive.com’s War Zone site discussed the most probable, and historically vulnerable targets. These would be the vehicle's data-sharing platforms that are responsible for key applications such as navigation and communications.

So, if knowledge is power, then knowing where enemy troops are coming from, what they’re talking about, and potentially altering that data, is exponentially more useful than a bigger gun.

Not surprising, the primary reason for upgunning the Dragoons was in response to escalated Russian involvement throughout Europe. U.S. forces have also encountered cyberattacks related to military planes in Syria, which are reportedly connected to hostile Russian forces.

A dispute with a battery supplier is complicating VW's electrification plans.
Feb 16th, 2021

Chip Plant to Restart After Earthquake

But even the short shutdown will be enough to disrupt supply.
Feb 16th, 2021

These developments out of Moscow are almost too crazy to believe.
Feb 15th, 2021 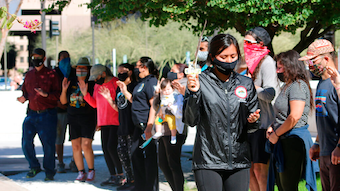 Court Rules Against Apaches in Bid to Halt Proposed Mine

The group argued that the land belongs to Apaches under an 1852 treaty.
Feb 15th, 2021
Follow Us
Most Recent