The move follows a complaint about Teslas equipped with "gameplay functionality." 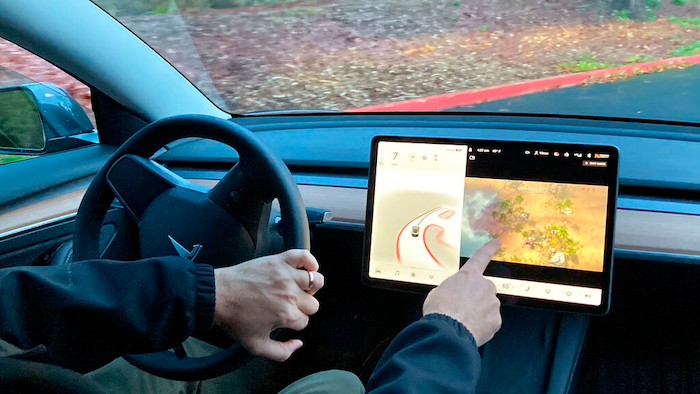 Vince Patton, a new Tesla owner, demonstrates on Dec. 8, 2021, on a closed course in Portland, Ore., how he can play video games on the vehicle's console while driving. The U.S. has opened a formal investigation into a report that Tesla vehicles allow people to play video games on a center touch screen while they are driving.
AP Photo/Gillian Flaccus, File

ATHENS, Ohio (AP) — The U.S. has opened a formal investigation into a report that Tesla vehicles allow people to play video games on a center touch screen while they are driving.

The probe by the National Highway Traffic Safety Administration covers about 580,000 electric cars and SUVs from model years 2017 through 2022.

The action follows a complaint to the agency that Teslas equipped with “gameplay functionality” allow games to be played by the driver while the vehicles are moving.

In a document posted Wednesday on its website, the agency says the feature, called “Passenger Play,” may distract the driver and increase the risk of a crash.

The agency's Office of Defects Investigation said in the document that the game capability has been available since December of 2020. Before that date, the games could only be played while the Teslas were in park.

The probe, which covers all four Tesla models, the S, X, Y and 3, was opened “to evaluate the driver distraction potential of Tesla ‘Passenger Play’ while the vehicle is being driven.” Investigators "will evaluate aspects of the feature, including the frequency and use scenarios of Tesla “Passenger Play.”'

The NHTSA documents do not list any crashes or injuries caused by the problem.

An investigation can lead to a recall. A message was left early Wednesday seeking comment from Tesla, which has disbanded its media relations department.

Tesla owner Vince Patton, who lives near Portland, Oregon, filed the complaint with the agency last month. In August, he was watching a YouTube video of a Tesla owner who discovered that he could now play a video game on his touch-screen while the vehicle is moving.

Curious to see for himself, Patton drove his own 2021 Tesla Model 3 to an empty community college parking lot, activated a game called “Sky Force Reloaded” from a menu and did a few loops.

“I was just dumbfounded that, yes, sure enough, this sophisticated video game came up,” said Patton, a 59-year-old retired broadcast journalist who lives near Portland, Oregon.

He tried Solitaire, too, and was able to activate that game while driving. Later, he found he could browse the internet while his car was moving.

Patton, who loves his car and says he has nothing against Tesla, worries that drivers will play games and become dangerously distracted.

“Somebody’s going to get killed,” he said. “It’s absolutely insane.”

So he filed the complaint early last month.

“NHTSA needs to prohibit all live video in the front seat and all live interactive web browsing while the car is in motion,” Patton wrote in his complaint. “Creating a dangerous distraction for the driver is recklessly negligent.”

Earlier in December, Mercedes-Benz issued a recall for a similar issue caused by a computer configuration error, raising questions about whether Tesla was being allowed to do something that other automakers are not. Most automakers disable front touch screens while vehicles are moving.

In the Mercedes case, drivers could browse the internet or watch television while the cars were moving. The automaker said it intended to disable the features while the cars are in motion. The issue was corrected by updating a Mercedes server.

NHTSA already is investigating why Tesla’s “Autopilot” partially automated driving system keeps crashing into stopped emergency vehicles, and it has inquired about why Tesla didn’t file recall documents when it did an over-the-air internet update in an effort to address the safety problem. It’s also looking into the performance of Tesla’s “Full Self-Driving” software after getting a complaint that it nearly caused a crash.

Tesla says neither system can drive vehicles and that drivers must be ready to intervene at all times.