The parents of a woman killed in the music festival shooting sued Colt Manufacturing Co. and several other gun manufacturers. 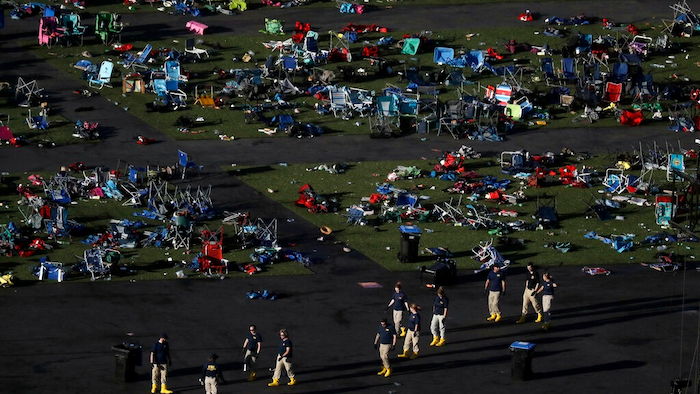 Investigators work at a festival grounds across the street from the Mandalay Bay Resort and Casino on Oct. 3, 2017, in Las Vegas after a mass shooting. The Nevada Supreme Court cited a state law that shields gun manufacturers from liability unless the weapon malfunctions in a new ruling that says they cannot be held responsible for the deaths in the 2017 mass shooting on the Las Vegas Strip.
AP Photo/Marcio Jose Sanchez, File

CARSON CITY, Nev. (AP) — Nevada’s Supreme Court ruled gun manufacturers cannot be held responsible for the deaths in the 2017 mass shooting on the Las Vegas Strip because a state law shields them from liability unless the weapon malfunctions.

The parents of a woman who was among the 60 people killed in the shooting at packed music festival filed a wrongful death suit against Colt Manufacturing Co. and several other gun manufacturers in July 2019.

The suit said the gun companies “knowingly manufactured and sold weapons designed to shoot automatically because they were aware their AR-15s could be easily modified with bump stocks to do so, thereby violating federal and state machinegun prohibitions.”

Stephen Paddock used an AR-15 with a bump stock when he fired 1,049 rounds in just 10 minutes on the crowd of 22,000 people from his suite in a casino-resort tower before he killed himself. Fifty-eight people were killed at the site or died in hospitals and hundreds more were wounded, including two people who died in the years after of complications from their injuries.

Nevada’s Supreme Court largely sided Thursday with the manufacturers’ argument that Nevada law immunizes them from civil actions, with the only "exception for products liability actions involving design or production defects that cause the firearm to malfunction.”

“We hold that (state law) provides the gun companies immunity from the wrongful death and negligence per se claims asserted against them under Nevada law in this case,” Justice Kristina Pickering wrote in the unanimous decision.

The lawsuit filed by Carrie Parsons’ parents, James and Ann Marie Parsons of Seattle, alleged the manufacturers showed a “reckless lack of regard for public safety” by advertising the firearms “as military weapons and signaling the weapon’s ability to be simply modified.” It said there are dozens of videos online showing people how to install bump stocks.

“It was only a question of when — not if — a gunman would take advantage of the ease of modifying AR-15s to fire automatically in order to substantially increase the body count,” the lawsuit said.

Pickering said the lawsuit was based on a claim of fault “beyond a firearm’s inherent ability to cause harm, that is, the gun companies’ manufacture and distribution of illegal machineguns.”

But she said in the 20-page ruling the state law doesn't limit the manufacturer's immunity specifically to “legal” firearms. She said it states that no civil action is permitted in such cases against the maker of “any” firearm or ammunition.

“We in no way underestimate the profound public policy issues presented or the horrific tragedy the Route 91 Harvest Festival mass shooting inflicted," she wrote, while noting that the law as written did not allow the Parsons to make a claim against the manufacturers.

“If civil liability is to be imposed against firearm manufacturers and distributors in the position of the gun companies in this case, that decision is for the Legislature, not this court," she wrote. "We urge the Legislature to act if it did not mean to provide immunity in situations like this one.”